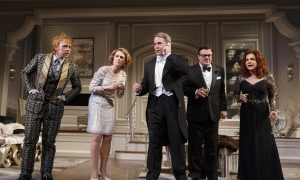 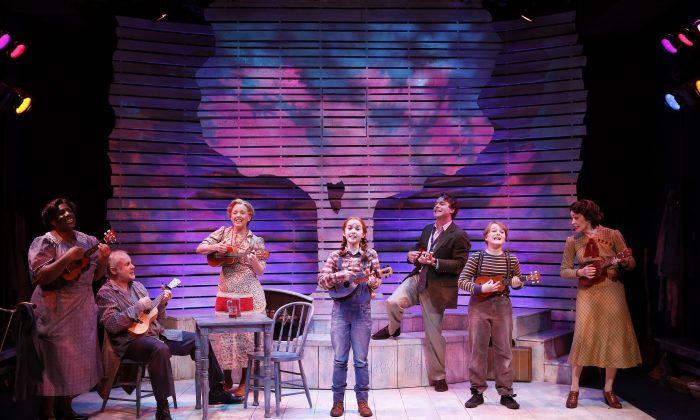 NEW YORK—The Irish Repertory Theatre is filling the holiday season with a mix of memory and music based on Truman Capote’s short story “A Christmas Memory.”

Directed with aplomb by Charlotte Moore, the story tells of an episode in the life of young Buddy (Silvano Spagnuolo), obviously a stand-in for Capote, when he visited his favorite older cousin Sook (Alice Ripley) in her Alabama homestead back in the 1930s.

Their days are filled with pleasure: They fly kites together; Sook undertakes her annual self-imposed chore of baking fruitcakes suffused with liquor, about 31 of them, which she will send to a long list of cherished friends and even people she does not know—for example, Franklin and Eleanor Roosevelt.

The adult version of Buddy (Ashley Robinson) hovers about and makes comments, his misty-eyed demeanor almost enveloping the figure of Sook, whom he obviously adored.

The appurtenances of musical theater lend a dimension not present in mere spoken storytelling. The book by Duane Poole is enhanced by music by Larry Grossman with lyrics by Carol Hall.

Examples that move the story along are “Imagine a Morning,” sung by Adult Buddy and ensemble; “Detour,” sung by the housekeeper Anna (Virginia Ann Woodruff); and “Buddy’s Midnight Adventure,” sung by another cousin, Seabon (Samuel Cohen), and by both Adult and Young Buddy.

A young neighbor, Nelle Harper (Taylor Richardson), close to Young Buddy’s age, lends sweetness to the offering, while another cousin, the grown-up Jennie Faulk (Nancy Hess), serves somewhat as the villain of the piece.

Performances are fine. Alice Ripley, who has an extraordinary theatrical pedigree, is excellent, although she is perhaps overqualified for her role. It’s an odd kind of compliment, but she appears too young and attractive to portray Sook, who must have been a very plain and ordinary person.

“A Christmas Memory” marks a nice way to spend a pleasant holiday evening or matinee afternoon. (Its present locale at DR2 Theatre is temporary while its basic site on West 22nd Street is in the process of being renovated).