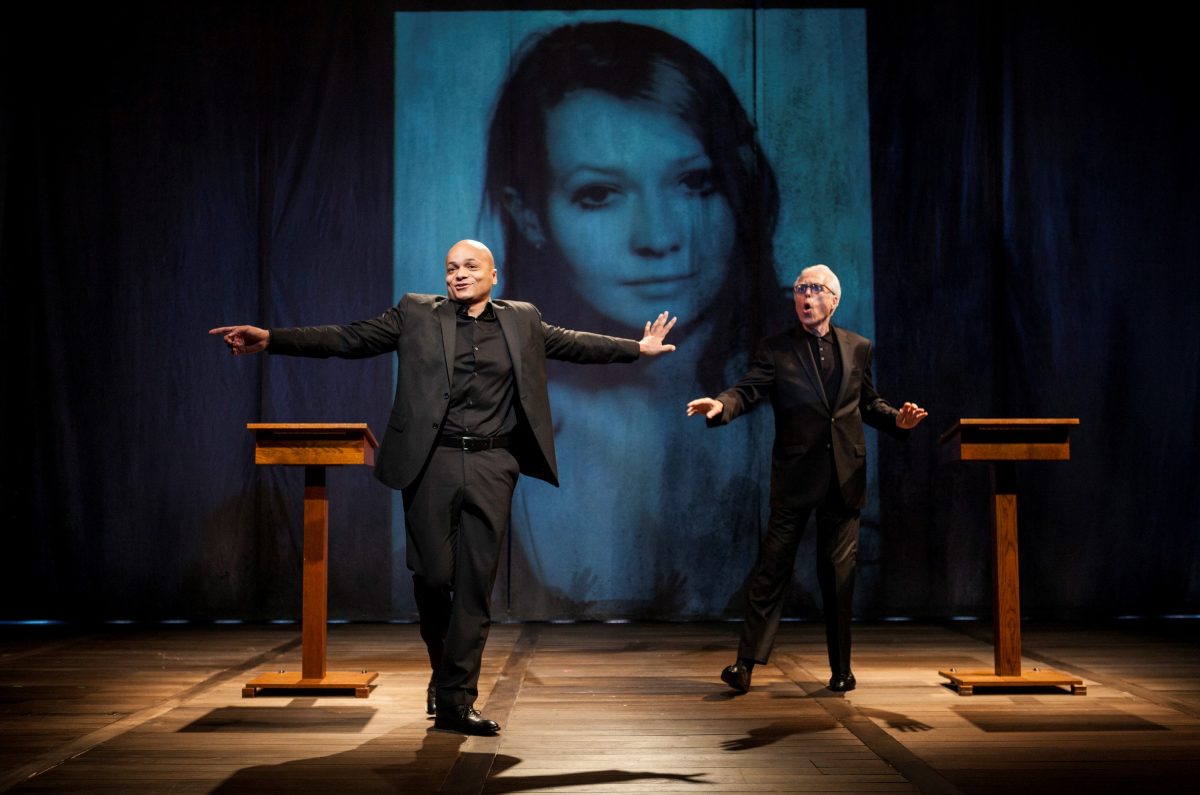 NEW YORK—Prize-winning playwright John Guare (Six Degrees of Separation, The House of Blue Leaves, Lydie Breeze, and others) has written a most unusual and provocative play. 3 Kinds of Exile is based on the lives of actual émigrés from Eastern Europe who came to the West.

Why did they leave their homeland? What became of them?

In the first section, “Karel,” the Actor (Martin Moran) tells of a man who had been suffering from a terrible rash. It covered his entire body, except for his face and hands. He was as red as a tomato and suffered from horrible itching.

After exhausting all medical advice, he saw a psychiatrist to whom he told of his childhood: He was sent by his mother to London to escape the raging war and Hitler.

On the trip, a fellow passenger, a child his own age, teased him mercilessly, calling him a coward for not being able to handle his loneliness and fear. Years later, the rash came upon him. No one knew of it but himself, for his healthy hands and face made him appear normal to others.

The denouement is startling, and unexpected.

The second section, “Elzbieta Erased,” features characters A (John Guare) and B (Omar Sangare), who tell of an actual famous Polish actress: Elzbieta Czyzewska. Once the reigning theater actress in Poland, she met there the noted American journalist David Halberstam, who became smitten with her. They married, and she came to live with him in New York.

At first she was welcomed and feted, meeting notables such as authors William Styron and John Guare. But soon her lack of English language skill made it difficult to obtain work. She became disgruntled, the marriage failed, the couple divorced, and Elzbieta was forced to cope on her own.

Elzbieta had some success. She worked at the Yale Repertory Theater where, it was noted, a young Meryl Streep played a small role. Elzbieta later won an Obie award for her role in Guare’s “Lydie Breeze.”

When William Styron’s novel Sophie’s Choice was to be made into a movie, many thought the leading role would go to Elzbieta. But Meryl Streep, who worked to acquire a suitable Polish accent, got the plum role.

Elzbieta tried to return to Poland, but was forbidden entry because of her former marriage to Halberstam, who was banned for his writings critical of Poland. Her behavior became erratic. She constantly smoked black cigarillos, she drank. She was her own worst enemy, fouling up important auditions.

She died of esophageal cancer in New York at age 72. Her ashes were flown back to Poland. One might say that, at last, the exile had come home.

The play’s last section, “Funiage,” is the most abstract, inspired by the works of writer Witold Gombrowicz, two of which were translated by Omar Sangare, who also acts in this production.

Gombrowicz (David Pittu), as a young aspiring writer, was sent by Polish officials to Argentina to meet with Polish émigrés there and urge them to return home to Poland.

Instead, when hearing that Hitler had just declared war on Poland, Gombrowicz decided to stay in Argentina, where he remained for most of his life, subsisting as a writer. He later visited Berlin, then died in France. According to the script, he was most content with his life abroad.

Sets are by Takeshi Kata, costumes by Susan Hilferty, and lighting by Donald Holder.

This complex production is skillfully helmed by director Neil Pepe, who is also artistic director of the Atlantic Theater Company.