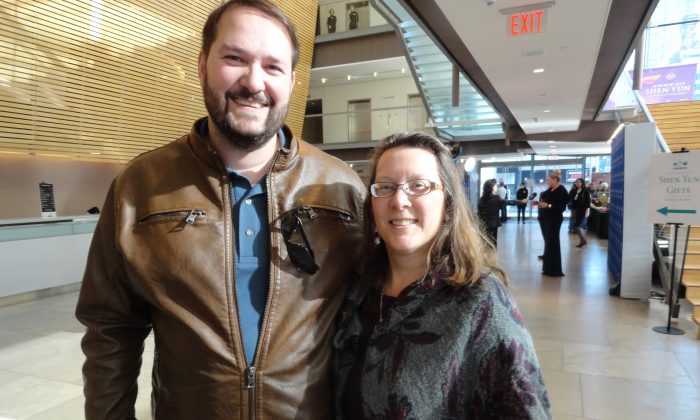 TORONTO–Writer Veronica Steele and her husband Duke Mills, an U.S. Airforce veteran, attended Shen Yun Performing Arts, the afternoon of March 27, 2019 at the Four Seasons Centre for the Arts.

Steele, who has held various positions in theater,ranging from directing, stage managing, writing, and production was impressed by the artistry, precision, and overall staging of Shen Yun.

“I can’t even conceive the amount of work that went into putting this together. They must have about 10 stage managers just to pull that off,” she said.

She also enjoyed the visual spectacle of the performance.

“I like seeing all the different color combinations and the bright silks. Whoever their costume designer is, it’s amazing,” she added.

Her husband was particularly fascinated by the classical Chinese dance piece “Sleeves of the Tang Palace,” which depicts elegant courtly ladies casting along their long, silky sleeves.

“The girls … they just throw [the sleeves] up, like fireworks, and then let the sleeves fall …. It’s beautiful,” he said.

Shen Yun, the world’s premier classical Chinese dance and music company has been touring the globe to revive the glories of 5,000 years of Chinese civilization, since 2006. Based in New York, it depicts authentic traditional culture, believed to have been divinely inspired.

The couple was touched by the spirituality they saw in Shen Yun. Mills was particularly impressed by tenor Tian Ge and his song “The Way That Saves.”

“When the tenor was singing, if you listen to the words of the song he was singing, he was expressing a very profound search for God–we’re here on earth to find Heaven,” he said.

Both of them felt that the performance was emphasizing a direct relationship between human beings and God, a Creator that is the same for all mankind.

“And we all make this mistake of letting man get between us and that Creator, which is [also] what the Chinese Communist Party (CCP) is doing [in China],” said Mills.

Steele recalled the performance “The Ties of Affection, the Tao of Destiny,” a love story in which the young woman is killed, but the young man’s sincere sorrow brings about a miracle.

“The woman gets stabbed with a sword, and he just takes it to God. … he takes it directly to God to save her, and the angels come down and save her,” she said.

“This is our first time and I’m really glad that we came,” said Steele.