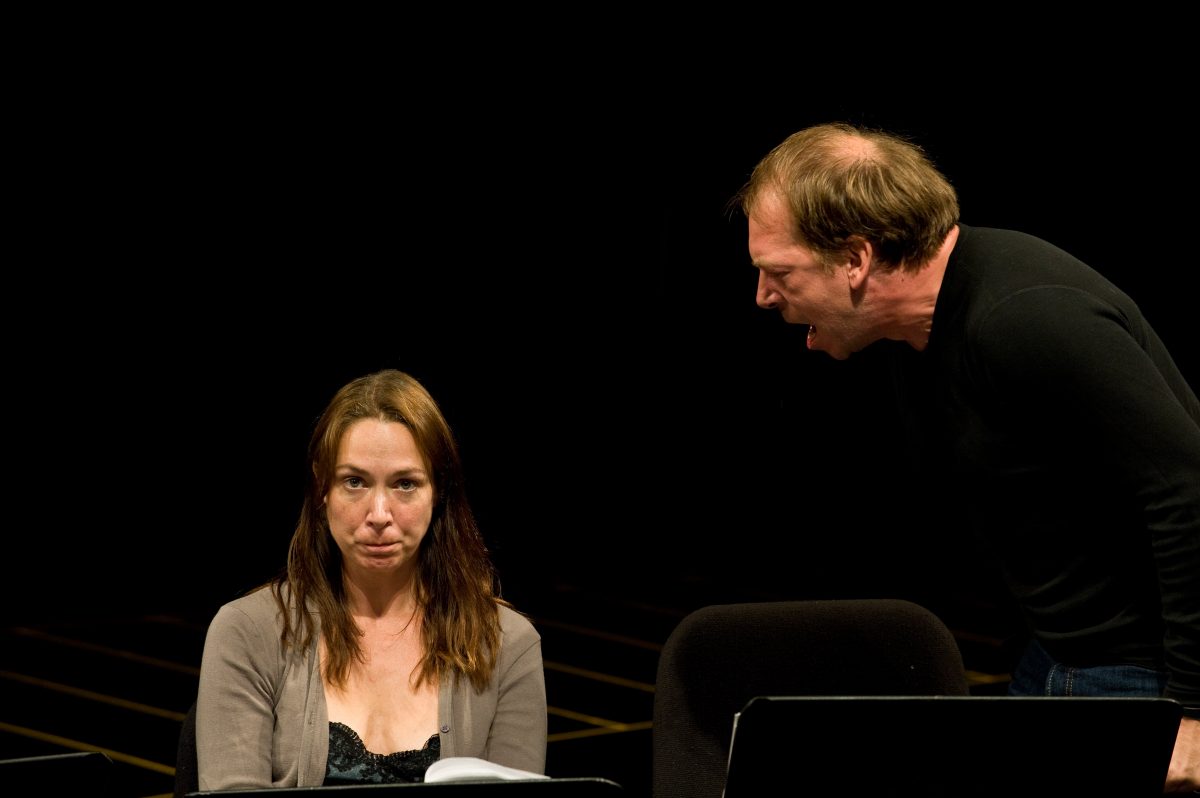 All four hundred people seemed to lean forward in their seats. Eight hundred eyes locked on the four actors sitting behind a table in front of them. The room was absolutely still except for the actors, in ordinary clothes, reading aloud from ancient scripts.

The audience of marines, their families, and caretakers had gathered to hear scenes from Sophocles’s “Ajax” and his “Philoctetes” at a San Diego hotel—the first of many Theater of War presentations. The soldiers were “voluntold” to attend by the military as a means to confront and hopefully control Post Traumatic Stress Disorder (PTSD). It was 2008.

Since then, Theater of War founder Bryan Doerries has had plenty of confirmation that the classics retain their potent significance. In fact, Doerries has recently published “The Theater of War: What Ancient Greek Tragedies Can Teach Us Today,” chronicling the project’s success.

In a sense, Doerries maintains the ancient idea that the arts should serve as a means to heal the community. For him, 5th century Greek tragedies in particular fulfill their original intention: to act as catharsis, a means to purge the soul of excessive, dangerous emotions, especially for the war-torn and weary.

Doerries does not frame his theater work as therapy for the psychologically wounded, as he explained in a phone interview on Wednesday, Oct. 27, 2015. Instead, according to the Outside the Wire website, a site for all of Doerries’s projects, as a self-proclaimed “evangelist for classical literature and its relevance to our lives today,” he aims to raise public awareness about the lasting effects of trauma—all kinds of trauma.

Doerries aims to raise public awareness about the lasting effects of trauma—all kinds of trauma.

In addition to Theater of War, Outside the Wire lists about a dozen other projects that rely on classic texts, and Doerries has directed more than 500 such performances in the last seven years. He has taken them to populations suffering from addiction, domestic violence, rape, and natural disasters, to name a few.

How These Classic Texts Reach Us

Over time, Doerries has come to see that certain conditions—conditions that the ancient Greeks had mastered—allow these texts to communicate on a deep level.

First, only powerful stories can grip and transfix the audience. Doerries typically relies on plays or poems of mythic proportion, like Sophocles’s plays, the biblical story of Job, or Eugene O’Neill’s “Long Day’s Journey into Night.”

Also, the stories must allow the audience distance, he believes: “There needs to be distance in time or culture, whether 2,500 years or 100 years. We don’t present stories about the Vietnam War. This is not meant to be a realistic portrayal. The ancient Greeks used this tool 700 years after the Trojan War, and by that time the war had become mythologized and distant as well.”

The distance allows viewers to see themselves mirrored in the plays. Ultimately, “the power of distance comes from realizing that you are not the only person to have experienced this. I would argue that these classic pieces have gained potency and relevance over time because we see that our struggles are not unique in time or across time,” he said.

Yet despite the distance, Doerries finds ways to draw the audience near. Theatrical pretense, for one, does not stand between those talking and those listening, as he explained in an interview on Didaskalia. Without scenery, without staging, the actors just sit and talk; they tell stories rather than make believe.

In the instances of ancient Greek plays, the informality of storytelling is aided by Doerries retranslating the texts for contemporary ears. He sees the texts as “blueprints for an experience.”

There is no “alchemical formula to transmute a work and make it alive for today.  So translations are required to carry the original spirit to the present,” he said. Idioms that would make little sense for us today are traded away for current yet fresh expressions.

These classic pieces have gained potency and relevance over time.
— Bryan Doerries, founder, Theater of War

In “Ajax,” when the eponymous hero considers suicide, Sophocles uses a nautical metaphor to describe the character’s internal state as a ship on a tempestuous sea, which spoke to the playwright’s audience of island dwellers.

But when 1,000 soldiers and civilians are in the audience, that phrase won’t give the same punch. So Doerries uses the phrases “shell-shocked” and “thousand-yard stare.”

Most importantly, the audience connects to the text because they have lived these stories or know someone else who has. The mythic, powerful archetypes match the audience’s trauma.

Sophocles’s “Ajax” tells of a man who lost his best friend in battle and feels betrayed by his superiors. Distraught, he blacks out and goes on a killing rampage, a rather pathetic one, which dishonors his illustrious reputation. Feeling he has no way out, he commits suicide.

In essence, Ajax is suffering from what today we call Post Traumatic Stress Disorder (PTSD).

The Limits of Suffering Alone

The initial idea for these projects came from Doerries’s feeling of helplessness in watching a loved one suffer. As a young adult, Doerries spent five months caring for his 22-year-old girlfriend who was terminally ill. Her extreme suffering and the recognition of his own limitations in dealing with it exhausted his compassion and made him hunger for communion.

“All I wanted to do was talk about my experience,” he said.

But our secular Western culture offers “little chance to congregate and face big questions. We live in a world where misery and death are not talked about,” he said. “We are closet sufferers.”

Doerries found some solace through the classics, which he had loved in college. Suddenly, though, the stories were no longer academic. They spoke to him.

Upon reflection, Doerries had a hunch. The challenge of meeting suffering that surpassed the limits of human compassion could be reached by these texts. He felt that his need to talk about his own suffering was likely universal and that talking about our ordeals is a need.

We are hard-wired as a species to have a predictable response to ancient myths.
— Bryan Doerries, founder, Theater of War

Therefore, after each performance of Theater of War or any of the other projects, he has invited the audience to share what in the readings resonates with them.

Those in the audience who wish to participate stand and tell their own stories.

In 2008, Doerries didn’t know if Theater of War would work. He had allotted 45 minutes for audience discussion after the very first performance and wondered if anyone would risk opening themselves up publicly.

But when he saw that 50 people had lined up to speak; when he heard them repeating lines from the text—memorized lines that had sunk in; when he intuited that these experiences had never been shared before; when it registered that these sharings were as rhetorically complex, as poetic, as the plays themselves; when after three hours of discussion many were still waiting to speak, Doerries knew the idea had more than worked. He had hit a nerve.

Doerries has also had indications of the project’s lasting impact: from a child calling to thank him for a healed family, to attendees returning to Theater of War 10 or 12 times, to suicides that have been averted.

Harper’s Magazine relates a tale of a Theater of War event at the U.S. Camp Zama Army Base in Japan. A retired lieutenant refused to get help that his wife insisted he needed after his tours in Afghanistan.

“‘Because of you guys,’ he told each of the actors afterward in an improbably explicit but nonetheless persuasive moment of frankness, ‘I’m going to seek help. I’ve been in denial for three years.'”

Only after the effects of catharsis had been demonstrated has social change ensued. Officers who attended early Theater of War performances contacted the Department of Defense and demanded more resources for this work. As a result, Doerries sees tectonic changes afoot in the military as perceptions about PTSD change.

Beyond Theater of War

It is not just Theater of War that has touched people. The Book of Job project uses the story of biblical Job, who loses everything in a day—his possessions, his health, his family—and then must deal with friends as they judge him. This project travels to disaster victims.

The project traveled to Joplin, Mo., on the anniversary of the devastating 2011 tornado when 158 people were killed. The hugely successful performance took place in a 2,000-person capacity megachurch and Paul Giamatti played Job.

After hurricane Sandy, the Book of Job performed in all five boroughs of New York.

The project also made a trip to Japan for the survivors of the tsunami and resulting radioactive disaster. Although generally a reticent people, the Japanese had the same reactions as people in the United States. “They opened up, cried, told stories, and hierarchies dissolved. High-level people also shared their stories,” Doerries said.

Doerries considers these texts to be a kind of technology. “They work for the right audience. Just plugging in a hard drive to the computer, once it’s plugged in it works. But it has to be the right match,” he said.

“We are hard-wired as a species to have a predictable response to ancient myths,” he said. For this reason, the power of the classic texts remains incredibly potent.