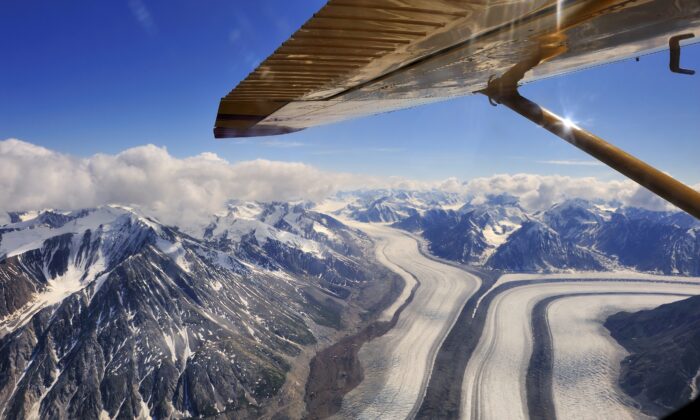 These days, the entire world is grounded—literally. With borders closed and the vast majority of international travel shut down, big jetliners that once ferried travelers over oceans and across continents sit idle and unused, passing long days parked side-by-side on runways. But there’s really nothing as magical as a ride in the sky, is there? So, as we dream of a more far-flung future, here are some of the finest air tours in the world.

A vertical city whose downtown core features a shimmering line of glass skyscrapers, Melbourne is also one of very few urban centers, anywhere, where you can balloon over the central business district—a company called Global Ballooning has been doing it for decades.

Sailing higher and higher before the dawn, it’s a chance to watch one of Australia’s fastest-growing cities shake off the night and wake up, from a whole new perspective.

Trace the course of the historic Yarra River, which once brought in hopeful gold miners but now is the playground of early morning rowers who are getting their blood pumping.

Here, a line of cyclists, as tiny as ants, sweep around a curve in the road, and over there, a couple of people play a sunrise round on the green square of a tennis court.

Then, as you rise even higher, so will your heartbeat as, for a few moments before you reach them, it feels like you won’t actually clear those towers. But, you do—and as you swoop over the top, you can lean forward and see helicopter pads and rooftop gardens, later descending to a big field in the suburbs, and then a hearty breakfast.

Chopper From the Eclipse

Launched just last year, the Scenic Eclipse is a revolutionary ship, a “discovery yacht” designed to deliver a true luxury experience, while sailing to some of the most distant corners of the world. With super-sized stabilizers and a hull strengthened to the highest-possible ice-class, it’s made for frozen waters and rough seas, an expedition ship meant to go beyond in the polar regions. And—in addition to a submarine, called the Scenic Neptune—the ship is equipped with twin Airbus H130 helicopters, meaning that you can soar over remote and unexplored lands, tracing glaciers from toe to top, looking directly down into their blue crevasses. And wildlife, too—on a recent voyage, flyers were rewarded with a view of humpback whales bubble-net feeding, watching them from the sky as these beautiful beasts surged from deep, dark waters to the surface in groups of two and three, slurping down as much krill as they could fit in those massive mouths.

It is one of the most astonishing spectacles in the animal kingdom—every year, 1.5 million wildebeest move in massive herds across the Serengeti, vast grasslands in Tanzania, in search of life-giving rains and (literally) greener pastures.

They’re led by zebras, who provide the eyes of the operation—and often trailed by a host of hungry predators, including lions and leopards. And the best way to see it all? From the sky. Stay at a lodge managed by andBeyond, one of Africa’s great luxury tour operators, and they will book you onto a once-in-a-lifetime dawn ride in a balloon.

Your pilot will give you a variety of perspectives on the wildlife—skimming along the treetops, close enough to hear the distinctive territorial grunting the wildebeest make on the migration (and, maybe, the roar of a lion), or up into the blue, 1,000 feet above the ground, endless grasslands—and herds, all the way to the horizon—unfolding, in all directions, far below.

Land on a Sub-Arctic Ice Field

Dropping out of the sky—and landing on skis—in Canada’s vast, northern Yukon Territory is an unforgettable experience. Lifting off from a small runway in the tiny town of Haines Junction, on the southwest corner of the territory, this small-plane flight takes you over the vast expanse of Kluane National Park and Reserve, an 8,500-square-mile preserve that’s also a UNESCO World Heritage Site, 80 percent of it covered in snow and ice.

You’ll trace the South Arm and Kaskawulsh glaciers, winding higher and higher into Canada’s tallest peaks, including Mount Logan, at 19,501 feet, the nation’s tallest mountain. But it gets even better on the descent—dropping from the blue, having, just moments ago, been dancing across the crowns of mountains, the plane traces a straight line into a seemingly unending field of white.

As you brace, the skis, which cover the plane’s wheels, make a smooth landing, the aircraft swooshing to a stop in the heart of Canada’s largest non-polar ice fields. (Don’t worry—the skis enable the plane to take off from there, too, for the return journey back to the Junction.)

Fly Over the Falls at Iguazú

A trip to the world’s largest waterfall transports you to an entirely aquatic world. Straddling the border between Brazil and Argentina (and very close to Paraguay), every path leads to a new, unique view. On the Argentinian side, an elevated walkway brings you precipitously close to the Devil’s Throat, which gushes with half of the entire waterfall’s flow, while smaller paths take you past, and even under, smaller cascades.

On the Brazilian side, home of Belmond Hotel das Cataratas, the only lodging inside Iguazú National Park, you’re treated to a panoramic view of these falls, more than twice the size of Niagara, an expanse of blue and white against the green rainforest backdrop. And to get a true perspective on the size and strength of Iguazú, take one of their 35-minute helicopter flights, which lift you above it all—the spray reaching the sky, the power of these great cascades at your feet.

Hawaii in the Sky

Home to some of the most dramatic scenery in the United States, the rainforests, beaches, and volcanoes of the Hawaiian Islands are even more breathtaking from above. Climbing into a Blue Hawaiian Airbus EC130 “Eco-Star” copter, you’ll be spirited through the air to parts of Oahu, Maui, Kauai, and the Big Island that remain inaccessible to those on wheels (or foot).

On Kauai, get close to the tumbling, plunging Manawaiopuna Falls, an icon since being featured in the opening scenes of “Jurassic Park.” On the Big Island, hover over the fiery, steaming spectacle of Kilauea, the world’s most active volcano, witnessing Madame Pele, the goddess of fire, preside over rivers of lava pouring down to newly formed black sand beaches, throwing up huge plumes as indescribable heat reaches the cool sea waves.

But our favorite ride takes you from Maui to Molokai, the latter an island with just one hotel that’s rarely visited by casual tourists. Leaving from Kahului and skimming across the sharp peaks and deep, dark valleys of the West Maui Mountains, you’ll thump across to the remote, mostly unsettled north shore of Molokai, zooming from the surface of the sea up and over the world’s highest tallest sea cliffs, rising some 3,900 feet, sweeping from the blue to green in a matter of seconds.