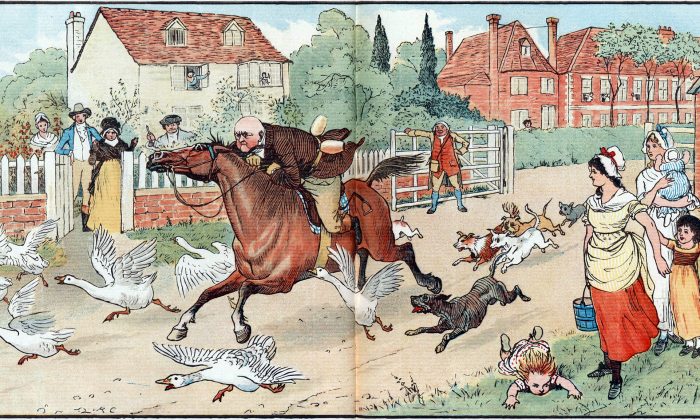 The Wit of William Cowper

These days, William Cowper (1731–1800) isn’t likely to be found on anyone’s list of Top 20 English Poets. Fifty years after his death, however, three competing collections of his poetical works continued to sell with over 100,000 copies in print. During his lifetime, his status was sufficient to induce the painter George Romney to sketch his portrait (which now hangs in the National Portrait Gallery and for which Cowper penned a thank-you poem). Today, the poet is remembered primarily for the hymns he wrote for the Olney Hymnal in collaboration with his pastor and friend John Newton. Newton contributed 280 hymns to the collection (including “Amazing Grace” and “Glorious Things of Thee Are Spoken”) while Cowper added more than 60 of his own (including “There Is a Fountain Fill’d with Blood,” “O for a Closer Walk with Thee,” and “God Moves in a Mysterious Way”).

Along with Newton, Cowper—toward the end of his life—also enjoyed a friendly relationship with the abolitionist crusader William Wilberforce, to whom he wrote a poem of encouragement. Along with Wilberforce, Cowper shared a love of animals (Wilberforce was a founding member of the first Society for the Prevention of Cruelty to Animals) and a deep attachment to rural life along with a profound appreciation for the beauty of nature—all of which feature prominently in his poems. Both men also experienced great suffering throughout their lives. For Wilberforce, it was emotional and physical weakness; for Cowper it was severe, episodic, suicidal depression.

Like other so-called Protestant Divines such as Milton, Blake, and Donne, Cowper infused his poetry with commentary on human nature and lessons in moral character. Although his longer poems—most of which were written in blank verse—set serious themes in ordinary settings, many of his shorter poems reflect the sort of keen wit and wry humor usually associated with Robert Burns and Samuel Johnson (whom Cowper admired and for whom he wrote an epitaph).

Take, for example, Cowper’s short poem “On Observing Some Names of Little Note,” in which he pricks the fleeting fame of both the poor and obscure and—by implication—the rich and famous as follows:

Oh, fond attempt to give a deathless lot
To names ignoble born to be forgot!
In vain, recorded in historic page,
They court the notice of a future age:
Those twinkling tiny lustres of the land
Drop one by one from Fame’s neglecting hand;
Lethean gulfs receive them as they fall,
And dark oblivion soon absorbs them all.
So when a child, as playful children use,
Has burnt to tinder a stale last year’s news,
The flame extinct, he views the roving fire—
There goes my lady, and there goes the squire,
There goes the parson, oh illustrious spark!
And there, scarce less illustrious, goes the clerk!

The effect is much the same as Shelly’s pseudo-pompous “Ozymandias,” which was written 18 years after Cowper’s death. Cowper’s version, however, has the distinct advantage of adding a wink and a smile to his consideration of the otherwise somber subjects of human mortality and the passage of time.

A longer, but no less whimsical glimpse into Cowper’s humor is found in “The Diverting History of John Gilpin: Showing How He Went Farther Than He Intended, and Came Safe Home Again.” In this poem, comprising 63 quatrains, Cowper tells the story of a man who, despite his meticulous plans, loses control of his horse, leaves his wife behind, and ends up 10 miles beyond his intended destination. The poem is a classic example of how to employ verbal overkill to squeeze out as many laughs as possible. The final lines even manage to meld both Cowper and the British throne into the comedy:

Now let us sing, long live the king,
__And Gilpin long live he;
And when he next doth ride abroad,
__May I be there to see!

In “To a Mouse,” Burns makes the same sardonic point: that “the best-laid schemes o’ mice and men gang aft agley.” But while Burns leaves us nodding in sober introspection, Cowper leaves us laughing outright at both Gilpin and ourselves.

Sometimes Cowper’s wit is merciless, rapier sharp, and aimed directly at the heart, as we find in this pointed, abolitionist Epigram, which Cowper printed in the Northampton Mercury:

To purify their wine, some people bleed
A lamb into the barrel, and succeed;
No nostrum, planters say, is half so good
To make fine sugar as a negro’s blood.
Now lambs and negroes both are harmless things,
And thence perhaps this wondrous virtue springs,
‘Tis in the blood of innocence alone—
Good cause why planters never try their own.

At other times, Cowper’s humor seems to exist only for its own sake, as with this short verse titled “Mary and John”:

If John marries Mary, and Mary alone,
‘Tis a very good match between Mary and John.
Should John wed a score, oh, the claws and the scratches!
It can’t be a match:–’tis a bundle of matches.

Cowper was not above poking fun at himself, as he did in “A Mistake in His Translation of Homer”:

Cowper had sinn’d with some excuse,
__If, bound in rhyming tethers,
He had committed this abuse
__Of changing ewes for wethers;

But, male for female is a trope,
__Or rather bold misnomer,
That would have startled even Pope,
__When he translated Homer.

To which Cowper added this footnote:

“I have heard about my wether mutton from various quarters. It was a blunder hardly pardonable in a man who has lived amid fields and meadows, grazed by sheep, almost these thirty years. I have accordingly satirized myself in two stanzas which I composed last night, while I lay awake, tormented with pain, and well dosed with laudanum. If you find them not very brilliant, therefore, you will know how to account for it.”

As if in anticipation of Lewis Carroll, Cowper composed conversations between otherwise inanimate objects, as in the poem “From a Letter to the Rev. Mr. Newton,” which begins:

Says the pipe to the snuff-box, I can’t understand
__What the ladies and gentlemen see in your face,
That you are in fashion all over the land,
__And I am so much fallen into disgrace.

Even more Carroll-istic is Cowper’s “The Poet, the Oyster, and the Sensitive Plant,” in which the poet overhears a complaintive argument between an oyster and a shrub and, in the end, scolds them on the grounds that neither possesses the human/divine attributes of pity, sympathy, and love. The poem concludes as follows:

His censure reach’d them as he dealt it,
And each, by shrinking show’d he felt it.

I conclude with Cowper’s thoughts “On the High Price of Fish,” a satiric commentary on political economics worthy of Swift.

Cocoa-nut naught,
Fish too dear,
None must be bought
For us that are here:

No lobster on earth,
That ever I saw,
To me would be worth
Sixpence a claw.

So, dear Madam, wait
Till fish can be got
At a reas’nable rate,
Whether lobster or not;

Till the French and the Dutch
Have quitted the seas,
And then send as much
And as oft as you please.

My final thoughts run as follows:

Cowper’s popularity was celebrated not by the usual upper-crust social elites, but by ordinary men and women who toiled and sweated for a living. Today’s upper-crust social literary elites appear to be predisposed to either dismiss him as a lightweight moralist or to simply ignore him entirely. This is, I believe, unfortunate. As far as I am concerned, his poetry has as much wit and contemporary relevance as Swift, Burns, Johnson, or Carroll. If you have never read Cowper before, I suggest you give him a try. I suspect you will find, as I did, that he will not only make you smile, he will touch your heart.

I end with these words from Cowper’s hymn “God Moves in a Mysterious Way,” in which Cowper hints that the source of all good humor, mirth, and joy is none other than God.

God moves in a mysterious way
His wonders to perform;
He plants his footsteps in the sea,
And rides upon the storm . . .

Judge not the lord by feeble sense,
But trust him for his grace;
Behind a frowning providence
He hides a smiling face . . .

James A. Tweedie is a retired pastor living in Long Beach, Washington. He has written and self-published four novels and a collection of short stories. He has several hundred unpublished poems tucked away in drawers.

This article has been slightly edited and appears with permission from the Society of Classical Poets.