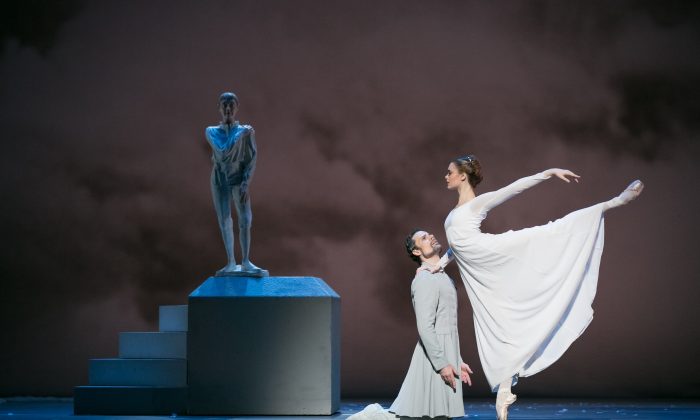 ‘The Winter’s Tale’: A Look at Our Humanity

For Harrison James, the ability to embody a multitude of characters through dance is one of the most rewarding experiences of his life.  Since childhood, the New Zealand native has been cultivating his passion for ballet through discipline, sacrifice, and hard work. His efforts have not only given him a successful career—he is now a principal dancer with the National Ballet of Canada—but have also nurtured his wisdom and introspection regarding his own life.

“You get to actually live these other lives and these other stories, and I think that can really teach you something about what it means to be human,” says James.

This month, James is making his role debut as Leontes, King of Sicily, as the National Ballet brings back to the stage Christopher Wheeldon’s story-length ballet “The Winter’s Tale,” adapted from Shakespeare’s play by the same. The character is an intense one, undergoing major psychological turmoils throughout the performance, something James says can take quite a toll on the dancer.

“You’re exhausted by the end because you’ve been through so much emotionally,” he says, noting that it is nonetheless a very fulfilling process. “It makes you more aware of things that you may be doing in real life.”

James says he often becomes aware of his own personal shortcomings through the stories he portrays through dance.

“I’ve had my crazy moments [in day-to-day life]. And then you come out the other side and you realize that that’s what it was—it was these emotions that drive these thoughts and these actions,” he says.

“It’s interesting, I think as you get older, you can almost see yourself going through these emotions and actions, but you still can’t control what you’re doing, just because it’s such a human thing to have to experience these. It’s not really something you can quash or put away. You have to go through these emotions.”

Wheeldon’s “The Winter’s Tale,” a co-production between England’s Royal Ballet and Canada’s National Ballet, had its premiere with the Royal Ballet in April 2014, followed by a Toronto run in the fall of 2015.  The British choreographer adapted Shakespeare’s play into a full-length story ballet, setting it to the music of composer Joby Talbot, which was specially commissioned for this production.

The ballet opens with the joyful reunion of two childhood friends, Leontes, King of Sicily, and Polixenes, King of Bohemia.  The situation turns bitter, however, when Leontes suspects Polixenes is having an affair with his wife Hermione and accuses him of being the father of her unborn child.  Although there is no proof of this, Leontes nonetheless becomes convinced of their guilt, which leads him to break the friendship and tear apart his family in irreparable ways.

“It’s really just a tale of humans being slaves to their emotions,” says James, who first danced Polixenes in 2015 and is performing both that role and the role of Leontes at various times in this production.

“Leontes is not necessarily a bad person in this story. He’s just overcome with these feelings and these suspicions, and he can’t really control his actions for a while,” he says.

Wheeldon’s ability to express the story and emotions through movement is visible throughout the ballet, James says, noting one can see the progression of Leontes’ feelings very clearly as the story unfolds.

Suspicion first creeps into the king’s heart when the pregnant Hermione grabs his hand and that of his friend and places them on her abdomen so that they can feel the baby kicking.

“Everyone freezes in that moment and the stage turns green. It conveys this jealous feeling, and [Leontes] has this solo with this creepy hand coming towards him,” says James.

The king tries to act like everything is fine, but gradually the madness grows.  “You can see at this stage that his mind is playing tricks on him and he’s seeing this affair in his mind, even though it’s not happening. From there, it progresses more and more until he is absolutely convinced that his wife and his best friend in the world have totally betrayed him,” he says.

“When you think of these creeping emotions that are on your skin, making you itch, or these thoughts that are in your mind that you want to scratch away—he has all these moments with these things crawling over him and he doesn’t like it. He’s trying to push it away and get away from it. He’s fighting it the whole time and that’s what puts him into these contortions and crazy positions. He’s fighting these emotions,” says James.

“When you think of jealousy, it’s an ugly feeling. It’s a gross feeling, it’s really unattractive, and I think you get all these angular contorted images from that emotion, and that makes it easier to perform and to tell the story. It’s like onomatopoeia, but with dance.”

In the last act of the ballet, as with Shakespeare’s play, a broken Leontes gets an opportunity for atonement when he discovers that his wife, whom he thought was dead, is actually still alive but had been in hiding for the past 16 years.

The final act offers a sense of joy and renewal for the repentant king, James says, but it also signals the price he will have to pay to earn Hermione’s forgiveness.

“They have a beautiful reuniting pas de deux, but I still think at the end, you know that Leontes is going to have to work very hard to gain that trust back again.”

The National Ballet of Canada’s production of “The Winter’s Tale” runs Nov. 10—19 at the Four Seasons Centre for the Performing Arts. For more information, visit: https://national.ballet.ca