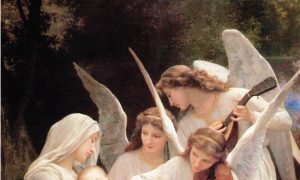 Aligning With the Will of Heaven: 'The Virgin With Angels'
0
Share Now
TelegramFacebookTweetEmailTellMeWeReddit
Copy Link 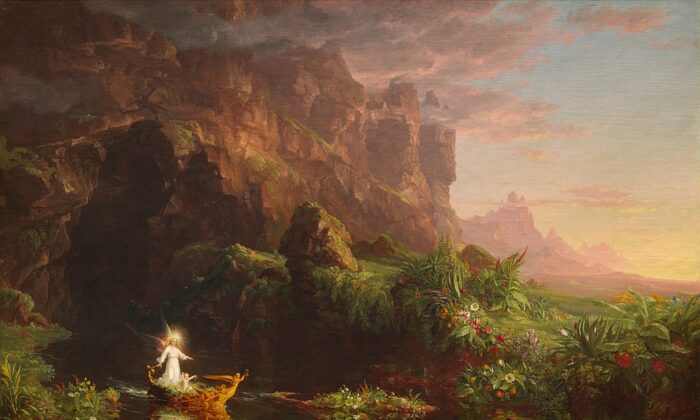 Our lives can be fascinating. We are born into a world preset with culture, tradition, language, and so on; and through sensual experience, we learn how to survive and, for some of us, thrive. However, many of us sense that there is something beyond mere sensuous experience—something we must believe without evidence, something we believe by way of faith.

Thomas Cole’s four-painting series “The Voyage of Life” caused me to reflect on how we might treat faith throughout our lives.

Thomas Cole’s ‘The Voyage of Life’

Thomas Cole was an American painter considered to be the father of the “Hudson River School,” which sought to romanticize landscape painting. The Hudson River School believed that nature was a manifestation of the Creator, and the school looked to nature to gain an understanding of the divine.

In “The Voyage of Life,” Cole depicts four stages of life: Childhood, Youth, Manhood, and Old Age. Examining each step separately along with the overarching theme of life’s voyage may provide insight into the importance of faith.

In “The Voyage of Life: Childhood,” Cole depicts an environment that appears to be the onset of spring. The sun rises off to the right side of the composition, letting us know that a new day is born.

As the sun rises, a baby boy enters the world on a boat guided from behind by an angel. The boat cruises on the river of life, and this river will serve as an undercurrent for the rest of the boy’s life. Beautiful flowers and lush greenery adorn the foyer of the world’s entrance as if to welcome the baby and angel.

The boat has been crafted with the images of angels, and at the bow of the boat, an angel holds an hourglass toward the sky, letting us know that the boy’s time is limited.

Cole’s second painting in the series depicts the attributes of youth. The environment is almost one of paradise. Clean, calm water carries the young man toward an otherworldly structure in the distance. Even the arrangement of the trees seems to encourage the young man’s journey, helping to guide our eyes from the young man to the castle in the sky.

The young man continues his trip down the river of life on the same boat, except that this time the angel who initially accompanied him into the world no longer rides the boat with him. Instead, the angel stands on the shore. With his back to the angel, the young man guides the boat on his own now and reaches toward the structure in the distance.

Having gone off on his own as a young man, the man, now an adult, finds himself amid turmoil. The river is no longer calm, and the environment is no longer green and inviting. Instead, jagged rocks jut from the crashing waters and close in on the man, who can no longer guide his boat. The sun appears to be setting in the distance.

The angel is no longer on earth with the man but is instead illuminated within the dark clouds at the top left of the composition. The man still has his back to the angel. He holds his hands in prayer not toward the angel behind him but toward the dark, gloomy faces in the clouds in front of him.

As an older man, our now white-haired voyager leaves behind the previously jagged and turbulent terrain. The front of his boat no longer displays the angel that holds the hourglass, but for the first time, he has turned toward the angel who has always been with him and watching him. The angel gestures ahead toward the light in the sky.

The dark and gloomy clouds separate to reveal the light of heaven, and an angel appears in the distance to receive the older man. The man stretches out his arms in awe of heaven’s glory.

Faith in the Divine

Cole has provided us with an archetypal depiction of our life’s journey. For me, however, the greatest lesson to take from these paintings is the importance of not just any faith, but of faith in the divine.

In my reflecting upon the importance of divine faith, several things in these paintings stick out for me.

First is the angel’s placement in relation to the man throughout his journey. Initially, the angel guides the baby into the world, and the baby begins his fated journey—a journey of fate represented by the boat and the river that the boy will never leave. Thus, the baby is fated to ride this boat on this river. And unable to guide himself, the baby represents a certain degree of innocence.

As the baby grows into a young adult and a man, he cannot see that the angel is always with him. Belief in the angel requires faith. The youth especially does not seem to put his faith in the angel but in other things. Guiding the boat himself, he is more concerned with the otherworldly, ideal building that he can see ahead of him. He even seems to look beyond the hourglass set at the front of his boat.

What the youth can’t foresee is the consequences of his actions. Completely ignoring the angel to pursue the building in the distance ultimately leads to the next stage of his life, which is one of turmoil. It’s as if the young man trades the potential for faith in the angel for faith in idealized imaginings based on his experiences with the world.

Is it the case that the castle in the sky may represent our desire for material gains? Does ignoring faith in the divine in order to focus on materialism lead to turmoil?

The painting of the youth is the only one in which the boy guides the boat himself, with his hand on the tiller. Does the destructive consequence of his pursuit suggest that it is ignorant to attempt to take control of our own lives instead of allowing ourselves to be guided by the divine?

The results of focusing too much on sensuous experience can often teach us that there is more to life than what’s in front of us. Cole had this to say about the period of Manhood:

“Trouble is characteristic of the period of manhood. In childhood, there is no carking care: in youth, no despairing thought. It is only when experience has taught us the realities of the world, that we lift from our eyes the golden veil of early life; that we feel deep and abiding sorrow.”

The man, in his sorrow, prays, but to what does he pray? The angel is still behind him, but he prays toward the faces in the dark clouds above him as if to ask them to stop his suffering. He fails to see that the dark faces are part of the dark environment he must now endure. The only thing separate from the gloomy atmosphere is the illuminated angel in the sky, an angel to whom he still has his back turned.

However, the man may be praying to the Creator while looking at the dark faces in the clouds, which would suggest the power of his faith: Despite looking at what is in front of him, he believes in what transcends him. His power of faith might also explain why the angel, hidden until now, is revealed in the next painting.

Faith eventually reveals the truth of both: Faith in materialism and idealism produces destruction and turmoil, whereas faith in the divine provides the brilliance of eternity represented by the light of heaven and the missing hourglass from the front of his boat.

I’m left asking how we might have the baby turn toward that which guides his journey? How might we encourage righteous faith in the divine from the onset so that the divine reveals itself early, and the voyage of life is no longer one thrown between the “sorrow” of material pursuits and faith but is one that becomes a journey of faith?