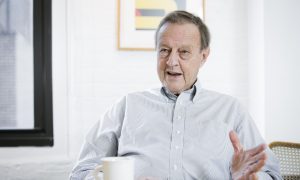 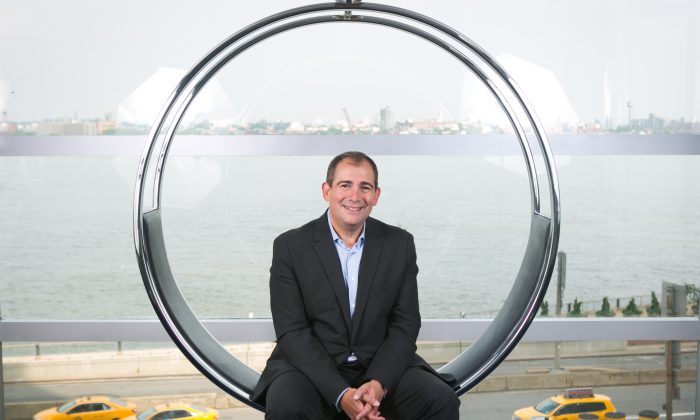 NEW YORK—Arthur F. Backal smiles a lot, every day, and for a big chunk of his day. You could say smiling is a necessary accouterment to his profession, being at the “top of the heap” in the hospitality business. But his genuine smile probably hints more at an open secret. He knows how to keep a virtuous cycle going, and it starts with loving what you do.

“It goes back a long way,” Backal said, walking through a hallway of the sleekly designed Apella high-tech event and conference center, with vast views overlooking the East River. Apella is his most recent venture.

He giggled contagiously as he recalled how his father would take him to business lunches and dinners when he was just ten years old. “I would put on my little suit and go to some of the best restaurants in New York. It was very cool actually,” Backal said.

Fast forward a few decades later and he’s the go-to ringmaster for hospitality consulting in New York City. Straight out of college, he landed his first job at the hottest luxury hotel at the time, the St. Regis. Later, he worked at other luxury hotels, like Helmsley Palace, the Pierre, the Plaza, and the Waldorf-Astoria, among others. He has managed over 20 venues in the city, and has consulted in the development of new hotels, restaurants, and event spaces abroad.

From the very beginning of his career he was itching to start his own business. But he waited until he really felt that he had enough experience and presence in the industry before he launched his first company, State of the Art Enterprises, an events management company. At the same time he partnered with the Mandarin Oriental hotel, directing its catering operation, helping to position the brand, and contributing to its huge success overall.

“I was ready for it and I think I did it at the right time,” Backal said.

Timing is of the Essence

For Backal good timing is a crucial aspect of his business ethic. “Timing can take on different meanings,” he said. Not only in terms of timing, the flow of an event, but “timing is also respecting other people’s time.” Even before the time of 24/7 connectivity to mobile devices, “getting back to people in a timely fashion is common courtesy,” he said.

Many people who have worked with him over the years have commented on his good timing. “I think you have to know timing, you have to feel timing … I know when to be where at the right time as best as possible,” he said.

As successful as you want to be, it’s not just about making more money; it’s about making an impact.
— Arthur Backal

It’s challenging to keep up with the current pace when time seems to be running faster than ever. “You’ve got to put your own value on your time. You have to present that to the people that you are either working with or working for doing business deals, and you’ve got to make sure that the effort you are going to put in is commensurate with the value of your time,” he said.

Now Backal is chief executive of Backal Hospitality Group, which is the hub from where he runs his other companies and does business with his affiliates. It’s a balancing act between consulting, event-planning, and his production business, as well as philanthropy. Backal, together with his wife Liana Backal, are also active contributors in several charitable organizations, such as City Harvest, which rescues excess food from restaurants and hotels and provides it to the homeless and other people in need.

On the day of the interview, Backal started with a meeting at the Mandarin Hotel on Columbus Circle, went to his corporate office on 55th street, and then across town to Apella by the East River for an events meeting, and then he would head over to Harlem for a dinner meeting at a restaurant he partners with, Streetbird Rotisserie.

Along with expanding and developing his ventures, the other key aspect of Backal’s virtuous cycle is being respectful.

“I do feel like as successful as you want to be, it’s not just about making more money, it’s about making an impact,” Backal said. That, he stressed, comes with having the right attitude. He keeps his eye on the big picture and also enjoys minding the details, not only of the design elements of an Apella pen, for example, but even more importantly when and how he interacts with people at every level.

I still try to do that [treat people with courtesy] every day of my life, because I think that is how you should want to be treated. You can’t demand that, you can only do what you can do, and hopefully everybody else you come in contact with shares some of those values.

“Do you like the setting here?” Backal greeted a woman placing flower bouquets on some glass bar tables in the lobby of the Apella Center. All smiles she replied, “Your team is so wonderful here.” The brief interaction points at just one little example of how he operates on a daily basis.

He feels really good whenever he walks into any of the places where he has worked before, recognizing the people there, remembering the history they’ve had together, knowing that he has treated them with courtesy. He said, “I still try to do that every day of my life, because I think that is how you should want to be treated. You can’t demand that, you can only do what you can do, and hopefully everybody else you come in contact with shares some of those values.”

Backal has managed countless events for celebrities, including a private party of musicians including the Eagles, Tom Petty, Aerosmith, Stevie Nicks, Kenny G, and Ciara, a stint that took over both floors of the Rainbow Room at Rockefeller Plaza. But even celebrities won’t impress Backal, if they don’t have a good attitude.

“To me the best celebrity is also the one that is a really nice person,” he said. “The ones that are too much like ‘I don’t have much time for that,’ they will lose me as a fan,” he added.

Backal is undeniably a people person. He especially likes working with hotels, because that setting gives ample opportunities for meeting new people. But what he finds most exciting about his work is mentoring his staff and other people he works with by giving them opportunities to grow for the long-term.

“It’s the hardest thing when you are working for other people, or in organizations, that aren’t really teaching you or growing you. That’s why I always want to be valuable in that aspect,” he said.

Down to earth and generous, there’s no danger of Backal becoming full of himself, it would be against his nature, and it wouldn’t be good for business either.

“I think I feel very much connected to what I’m doing. I’m very visible in my projects, but I definitely learn and continue to grow as a delegator. I’m afforded that ability because I’ve also been able to find the right kind of talent and take care of that talent,” he said.

In the next five years he plans to be more of a mentor and visionary executive, with more deliberate decision-making, and work with people of high integrity to make a more meaningful impact. It’s how he likes to see projects grow, with much passion and enjoyment.