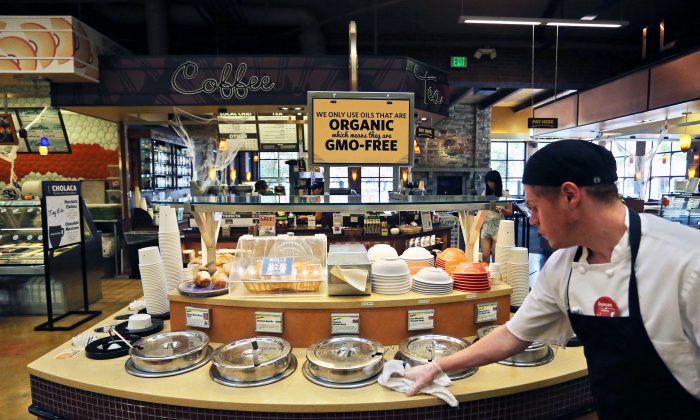 The USDA Just Approved a New Non-GMO Label, but That Doesn’t Mean Much

When the press leaked news of the first food company getting a non-GMO label from the USDA (Department of Agriculture) last week, it made waves across the food industry.

The Associated Press first reported that the federal government had approved a new label certifying that products are free of genetically modified ingredients, based on an internal USDA email AP obtained. The email was sent by the Secretary of Agriculture Tom Vilsack on May 1.

A “USDA Process Verified” program already exists for companies that want the federal agency to audit the accuracy of their marketing claims: such as antibiotics-free or growth-hormones-free meat. If the USDA verifies its claims, the company can label its products with a red, white, and blue USDA shield on the packaging.

In the email, Vilsack said “a leading global company” has requested the USDA verify that the corn and soybeans the company processes are of the non-GMO variety, under the Process Verified program.

The New York Times first revealed that the company in question was SunOpta, an organic food processing company.

SunOpta has created a new label that reads: “Non-GMO/GE Process Verified,” according to the USDA.

On Monday, SunOpta announced it had been granted approval for an initial six-month trial period and that it planned to apply for an extension when that period expired.

But that label won’t be showing up on supermarket shelves for the time being. The USDA said that only the raw corn and soybeans SunOpta uses has been verified as non-GMO. Thus, the final food products that use SunOpta’s corn and soybeans will not have the label on them.

Even if the label gets slapped onto a retail food product sometime in the future, the sticker may not tell you much.

Other companies that want to apply for the non-GMO certification can also use a similar label as SunOpta’s if they are approved, the USDA said in an email response.

But even if the label gets slapped onto a retail food product sometime in the future, the sticker may not tell you much. The USDA has not established any separate standards or regulations for what defines a “non-GMO” product; it only ensures that the company’s practices are what it says they are.

The nonprofit Non-GMO Project claims that it is the only organization in the United States and Canada that independently tests food products to ensure they do not contain GMOs. Many companies currently seek certification from the Project, which features a butterfly-shaped seal.

When consumers shop for meat products, it’ll still be impossible for them to know whether the feed used to raise the animals contains GMOs or not.

But when consumers shop for meat products, it’ll still be impossible for them to know whether the feed used to raise the animals contains GMOs or not.

The reason is, GMO corn, soy, canola, alfalfa, and other plants are widely used for feeding livestock. A September 2014 study by the University of California, Davis found that 70 to 90 percent of all genetically engineered crops grown in the world are consumed by food-producing animals (cows, pigs, goats, chickens, and other poultry).

In the United States, about 9 billion animals are processed into food for human consumption every year, and 95 percent of them consume feed with GMO ingredients.

Restaurant chain Chipotle, which has recently vowed to rid its menu completely of GMO ingredients, said that it couldn’t guarantee that its chicken, pork, and beef suppliers weren’t using GMO animal feed because it is so pervasive.

And of course, the certification is completely voluntary. Companies that don’t wish to participate can continue to remain silent on the origins of their food products.

Some states have proposed legislation to mandate GMO labeling, amid consumer demands to know what is in their food. The food industry, though, has opposed such proposals, citing concerns that mandatory labeling may give the perception that GMOs are unsafe for human consumption.