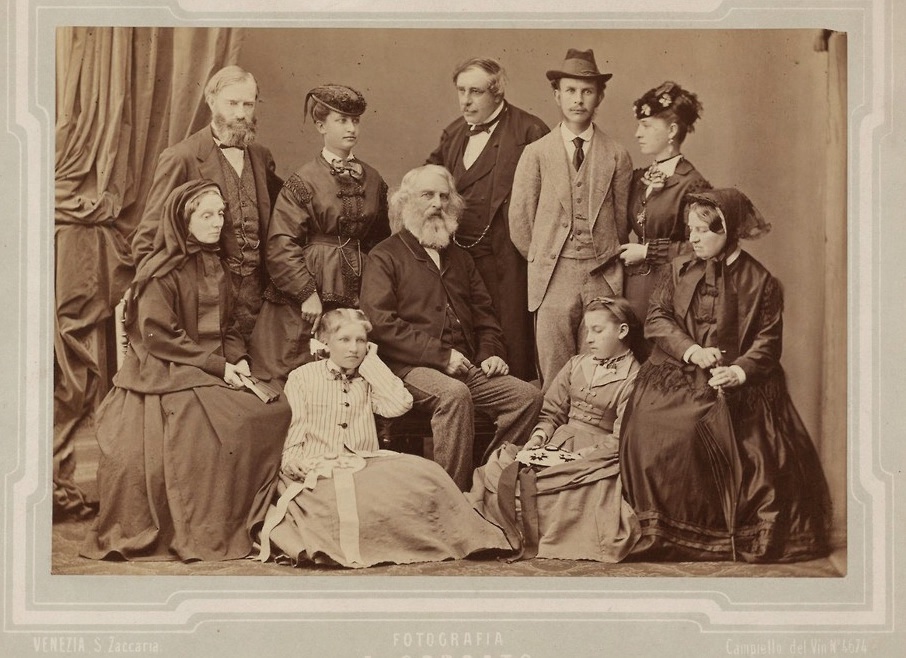 The family of Henry Wadsworth Longfellow poses for a photographer in Venice, 1869. Longfellow is seated center. Of those standing, his son Ernest is second from right and his eldest daughter Alice Mary is second from left. His daughters Edith and Anne Allegra sit on the ground. (Public domain)
American Essence

Henry Wadsworth Longfellow’s popularity among average Americans of his day is something contemporary poets dream about. An international celebrity, he dispensed pre-signed autographs to the many fans who visited his home in Cambridge, Massachusetts, hoping to meet the author of “Paul Revere’s Ride” and “The Song of Hiawatha.” His work is famous for his placid optimism, and critics today often deride it as shallow. But beneath the surface of the galloping meters and charming imagery lies an undercurrent of melancholy—even of profundity. His love life served as an inspiration to his verse, and when his two marriages ended in tragedy, he coped with despair by creating some of the most life-affirming poetry ever written.

In 1831, Longfellow, age 24, married Mary Potter, the beautiful and well-educated daughter of a Boston judge. He was drawn to her “pure heart and guileless disposition,” and Mary, too, was smitten. Longfellow was aspiring toward his boyhood dream of becoming a professional writer but struggled to find his literary voice. It was Mary who influenced his decision to resume writing poetry, a youthful practice that had fallen into neglect since he became a professor at Bowdoin College.

The couple enjoyed four happy years together. Then, in 1835, while traveling Europe, Mary suffered a miscarriage and died from the resulting infection. Henry was devastated. He expressed a desire to be with her in heaven, and he wrote a friend that when standing over her grave, he imagined seeing “my own tomb.” He spent the next several years tinkering with a poem that channeled his sorrow into verse. The result, “Footsteps of Angels,” is about a lonely, grieving narrator who is visited by deceased acquaintances. One of them, a “Being Beauteous,” consoles him with the knowledge that she has found a final resting place:

With a slow and noiseless footstep
Comes that messenger divine,
Takes the vacant chair beside me,
Lays her gentle hand in mine.

And she sits and gazes at me
With those deep and tender eyes,
Like the stars, so still and saint-like,
Looking downward from the skies.

Uttered not, yet comprehended,
Is the spirit’s voiceless prayer,
Soft rebukes, in blessings ended,
Breathing from her lips of air.

It was around this time that Longfellow also wrote a series of “psalms,” as he called them—poems symbolizing an acceptance of Mary’s death. The first piece, entitled “A Psalm of Life,” includes many lines that have become popular phrases: “Life is but an empty dream,” “Let the dead Past bury its dead,” “Footprints on the sands of time,” and “Learn to labor and to wait.” The poem established Longfellow’s voice and was an instant success.

A Second Chance at Happiness

Nine months after Mary’s untimely death, Longfellow met Frances “Fanny” Appleton. He accompanied her family through the Swiss Alps as they talked about art and literature. Henry was quite taken with the “rare, sweet woman” and her sophisticated mind. But while Fanny admired his erudition and enjoyed his conversation, she did not consider him more than a friend. He was persistent, however, courting her with increasing anguish after their return to New England. Friends expressed concern about Longfellow’s well-being, commenting on his “pale” and “low-spirited” appearance. Henry poured his feelings out into a novel, “Hyperion,” about an American touring Europe who unsuccessfully tries wooing a charming female with qualities strikingly similar to Fanny Appleton’s. Fanny was unimpressed when she read it, and it was not until 1843—seven years after Longfellow began courting her—that she agreed to marry him.

The years that followed were the happiest of Longfellow’s life. Nicholas Basbanes’s recent biography of Longfellow, “Cross of Snow,” includes selections of previously unpublished letters to detail the couple’s intimate relationship. As she was the daughter of a wealthy industrialist, Henry’s marriage to Fanny brought him material comfort as well as intellectual companionship. Fanny, a skilled artist and writer herself, assisted him in many of his creative projects. In a love sonnet, “The Evening Star,” he paid tribute to “My best and gentlest lady.” She even served as the muse behind the love stories in his longer narrative poems “Evangeline” and “The Courtship of Miles Standish.” The couple had six children together and thrived in their Brattle Street mansion for nearly 20 years.

Then tragedy struck. On July 10, 1861, Fanny was sitting at a candlelit table, sealing an envelope with hot wax, when her muslin dress caught fire. The billowy dresses in fashion at the time, which often used horsehair as a fabric stiffener, were highly flammable. She ran toward the study, awaking Henry from a nap. He tried hugging her to snuff out the flames, but her hooped petticoat prevented this by acting as an air duct. Henry’s own hands and face were badly burned. After he put out the fire with a small throw rug, she was carried upstairs. A doctor arrived and administered ether to ease her suffering. Fanny died the next morning.

Longfellow’s son later recalled him lying in bed for days afterward, “holding up his poor bandaged hands and murmuring, ‘Oh, why could I not save her?’” Though he had become one of the world’s most famous authors, he found himself unable to write. When he did take up a pen again, he focused his energy on translating Dante’s “Divine Comedy.” Growing a long beard to hide his facial scars, he took on the appearance of a prophet. Many years passed before he could bring himself to reflect on the event in a sonnet.

“The Cross of Snow”

In the long, sleepless watches of the night,
A gentle face—the face of one long dead—
Looks at me from the wall, where round its head
The night-lamp casts a halo of pale light.
Here in this room she died, and soul more white
Never through martyrdom of fire was led
To its repose; nor can in books be read
The legend of a life more benedight.

There is a mountain in the distant West
That, sun-defying, in its deep ravines
Displays a cross of snow upon its side.
Such is the cross I wear upon my breast
These eighteen years, through all the changing scenes
And seasons, changeless since the day she died.

The poem is dated July 10, 1879: exactly 18 years after the day of Fanny’s death, which was itself three days before what would have been the couple’s 18th wedding anniversary and was instead her funeral. “The Cross of Snow” references two works of art: in the first stanza, Fanny’s portrait by Samuel Rowse, in the second a landscape by Thomas Moran. Longfellow brings the two images together in a deeply moving way. After writing the sonnet, he placed it in an envelope among his private papers. When he died three years later, his brother Samuel discovered the poem and published it in a biography he wrote about Henry. “The Cross of Snow” belies Longfellow’s critical reputation as a poet of superficial optimism, and it is proof that great beauty can be born of terrible misfortune.

Andrew Benson Brown
Follow
Andrew Benson Brown is a Missouri-based poet, journalist, and writing coach. He is an editor at Bard Owl Publishing and Communications and the author of “Legends of Liberty,” an epic poem about the American Revolution. For more information, visit Apollogist.wordpress.com.
SHARE
Friends Read FreeCopyFacebookTweet
You May Also Like