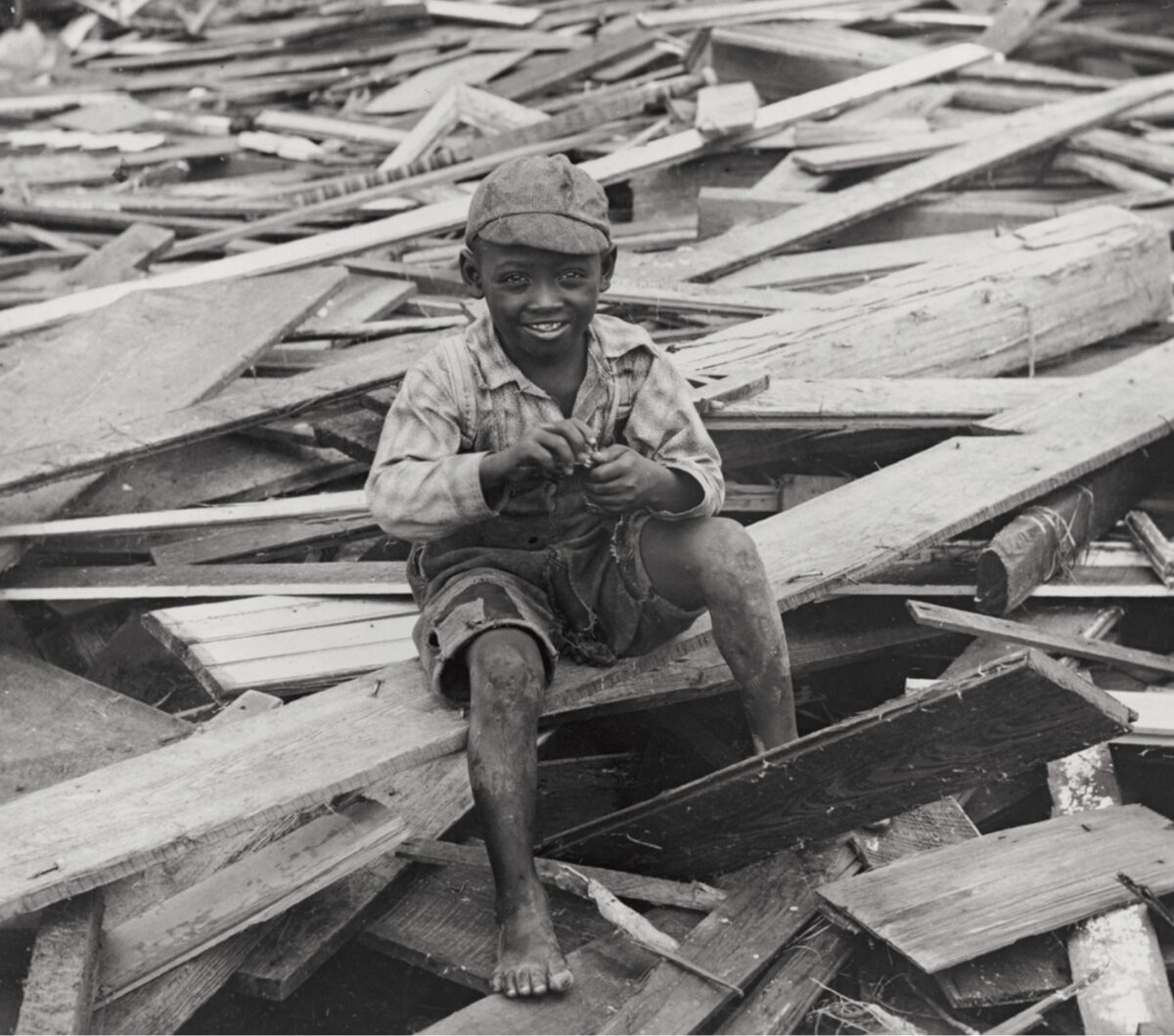 A young boy sits on debris in the wake of the deadliest natural disaster in American history. (Zahner/Library of Congress)
American Essence

The Galveston Hurricane and the costly mistake that contributed to its devastation
BY Debi DeSilver TIMEAugust 12, 2022 PRINT

“The whole story will never be told, because it cannot be told.” This was the dispatch sent to the Associated Press office in Chicago from the manager of the Galveston News on Sept. 12, 1900, four days after a catastrophic hurricane dealt death, desolation, and destruction to the thriving sand-barrier island located about 2 miles off the Texas coast. Known as “The Great Galveston Hurricane” or the “Great Storm of 1900,” it has gone down in history as the deadliest natural disaster in the United States.

“A summary of the conditions prevailing at Galveston is more than human intellect can master,” wrote the local news manager, R.G. Lowe. “Briefly stated, the damage to property is anywhere between $15,000,000 and $20,000,000. The loss of life cannot be computed. The help must be immediate.”

Meteorologist Isaac Cline and his young family moved to Galveston in March 1889, where his assignment with the U.S. Weather Service was to establish a new weather station and organize the Texas Section. Cline wasn’t a novice; he had already established a respectable reputation as a great weatherman in various parts of the country, including Abilene, Texas, where he met and married his wife Cora May Ballew in 1887. They met in the Baptist church where she was the organist and niece of the pastor. The community welcomed Cline and his family, which grew to include three daughters and his brother Joseph. They were members of the First Baptist Church, and Cline taught Sunday School.

At the time that the Clines moved to Galveston, the island was considered one of the most important and progressive cities in Texas. It was not only a thriving commercial center but also a popular vacation spot and boasted a population of about 40,000 people. Along the Gulf Coast, Galveston held the potential for being one of the biggest and most prosperous cities. It had been referred to as the “New York of the South.”

In 1882, prior to his Galveston assignment, Cline had trained with the Army Signal Service weather service in Fort Myers, Virginia. He then was sent to Little Rock, Arkansas, where he performed duties as an assistant weather observer. Impressed with his organizational skills and work ethic, his superiors asked him to take charge of the Galveston Weather Bureau.

Erik Larson, in his book “Isaac’s Storm,” writes, “In November of 1893, two years after Isaac arrived in Galveston to open the Texas Section of the new U.S. Weather Bureau, a government inspector wrote, ‘I suppose there is not a man in the Service on Station Duty who does more real work than he. … He takes a remarkable degree of interest in his work, and has a great pride in making his station one of the best and most important in the country, as it is now.’”

The citizens of Galveston were happy to have the seasoned weather professional among them, as storms had afflicted the island previously with flooding, damage, and occasional loss of human life. Questions were always lurking beneath the surface. Should more be done to protect the city and island? Should a breakwater be built off the beach to hinder waves and tides? Should a high seawall be built? The island was only about 9 feet above sea level.

In 1891, nine years before the great hurricane, after another troublesome storm had caused flooding; the local newspaper asked for Cline’s opinion on the odds of a deadly hurricane striking the island. Should the city spend considerable money building a high seawall along the Gulf beach? His response, printed in the July 15, 1891, newspaper was that Galveston was perfectly safe. In his letter to the newspaper, Cline explained to the community that it was overwhelmingly clear that the city would barely feel the effect if a storm ever pushed the high Gulf surf onto the island. Water would flow over the city, enter the bay, and make its way to the mainland. He also believed that the Gulf shoreline was so shallow that it would fragment any incoming surf. Cline declared that hurricane fears were “an absurd delusion.” The city fathers and community were satisfied with the renowned meteorologist’s opinion. No money was invested in efforts to protect the island from severe storms.

A cargo ship sailing east of the Winward Islands in the West Indies reported a tropical storm on Aug. 27, 1900. It was weak and not quite formed and was detected moving toward the Caribbean Sea. After entering the northeastern Caribbean on Aug. 30, it made landfall in the Dominican Republic as a weak tropical storm on Sept. 2. By the next day, the storm had begun to intensify and crossed Puerto Rico with winds over 43 miles an hour. Cuba was the next stop, and the city of Santiago de Cuba recorded 12.58 inches of rain in 24 hours. On Sept. 6, the tropical storm entered the Gulf of Mexico and strengthened into a hurricane.

On Sept. 7, Cline anxiously raised the hurricane warning flags on top of the Galveston Weather Bureau building. This wasn’t supposed to be happening; however, he noticed the sea swells were rising in size and frequency. He knew danger was imminent. Cline wrote in his memoirs:

“Early on the morning of September 8th, I harnessed my horse to a two wheeled cart, which I used for hunting, and drove along the beach from one end of the town to the other. I warned people that great danger threatened them, and advised some 6,000 persons who were summering along the beach to go home immediately. I warned persons residing within three blocks of the beach to move to higher portions of the city.”

Floodwaters began rising by midafternoon, and around 8 p.m. on September 8 the storm’s fury was unleashed.

Some of the Story

Initially, few people saw cause for concern, and few people tried to evacuate to the mainland. Three of the most prominent citizens of the town were among the first to lose their lives. Stanley G. Spencer, Charles Kellner, and Richard Lord were sitting at a table on the first floor at Rietter’s Saloon on The Strand when the roof caved in. A waiter was sent for a doctor but didn’t make it. He was later found drowned in the rising floodwaters.

The whole story can never be told. There were the 15-foot waves that knocked almost every building on the island from its foundation, throwing thousands of people into the swirling, debris-filled water. The power of water can be life-giving and creative, and the power of water can be destructive and deadly. Floodwaters were at least 12 feet deep, and stories emerged of people surviving by drifting for hours on any board or object that would keep them afloat. An exact final death toll was never compiled. Estimates ranged from 6,000 to 12,000, with an average of 8,000 settled on for the Galveston area and thousands more on the mainland.

Sadly, Cline’s wife and unborn child were victims of the storm. He, his three daughters, and his brother survived the night of terror. In an interview with a news reporter just a few days after the tragedy, Cline said that when their home collapsed and he was pinned by falling timbers under the water, he felt no fear. “At that time I yielded myself to my creator, and the process of drowning commenced,” he was recorded as saying. He was overcome with joy when he was reunited with his three daughters and brother less than three blocks from where their house once stood. “With an aching heart, I told them of our misfortune, and the brave little darlings said, ‘Papa, don’t cry, mama is with Jesus now.’”

Galveston’s plea for immediate help was heard around the world. Prompt and generous aid was sent, and the city set about rebuilding itself. Construction of a seawall began in September 1902. Over the course of the next 60 years, the bulwark was extended from 3.3 miles to over 10 miles. On the 61st anniversary of the deadly 1900 storm, Hurricane Carla struck Galveston. In the area protected by the seawall, there were no lives lost and no homes destroyed.