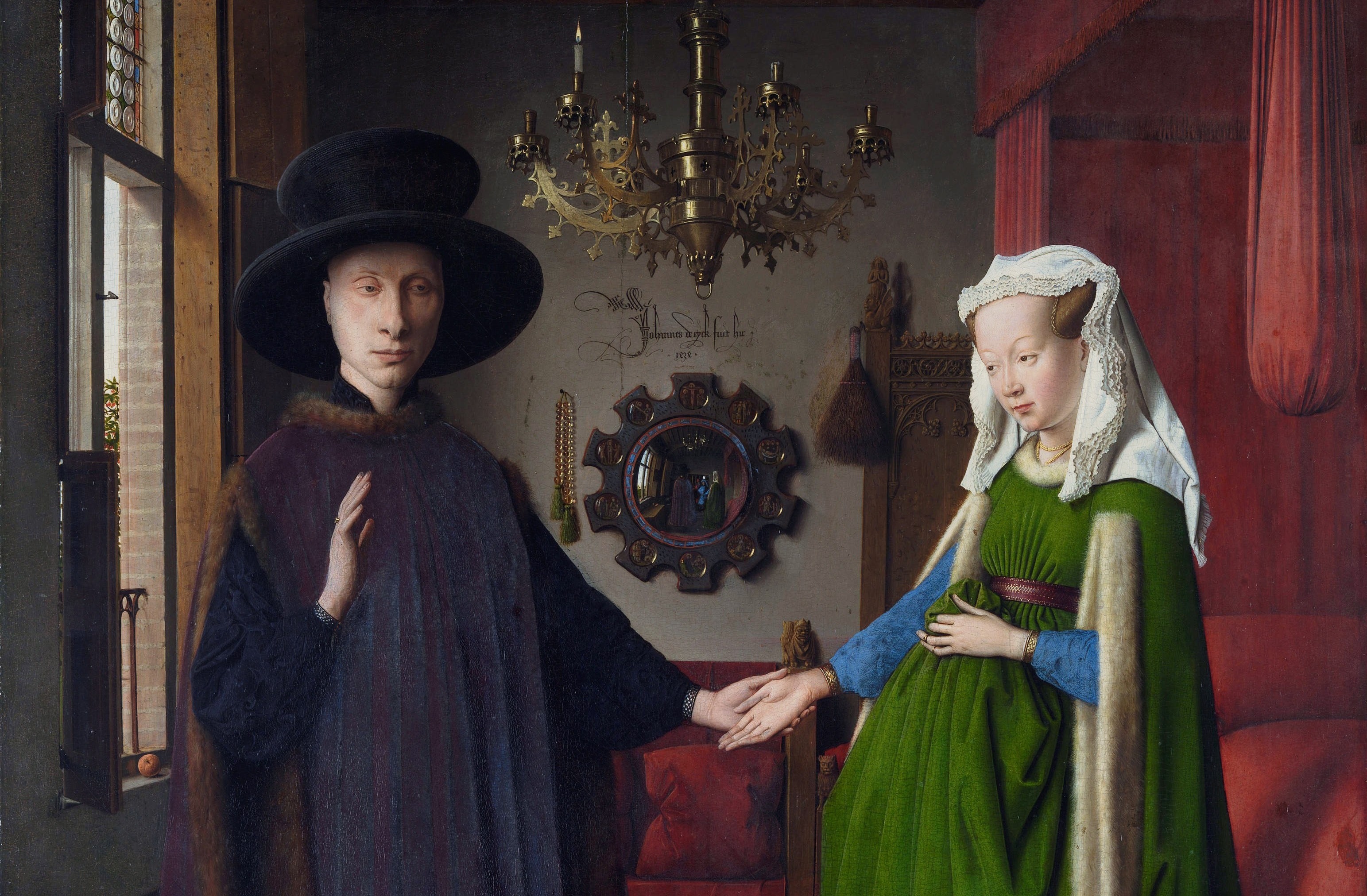 Though created nearly six centuries ago, the justly famed double portrait by the Flemish master Jan van Eyck in the National Gallery, London, still holds viewers in thrall. Yet art historians have been unable to determine with certainty who is depicted or what the circumstances and intent of its creation were.

The first in-depth analysis of this enduring masterpiece was offered by the eminent art historian Erwin Panofsky in 1934. Prior scholars had generally regarded the picture as portraying an Italian merchant named Giovanni Arnolfini and his young wife, Jeanne Cenami, who were living in the Flemish city of Bruges in the early 15th century.

This identification had been based on descriptions of the painting in 16th-century inventories of works owned by Margaret of Austria, which referred to the man in the picture as “Hernoul le fin” and “Arnoult fin.” Panofsky accepted this identification and, upon analysis of what he interpreted as the symbolic significance of the image’s many intriguing details, he proposed that the work was a marriage portrait memorializing the private wedding vows between the couple.

New documentary evidence has invalidated his long-accepted interpretation, however.

An older Giovanni Arnolfini was living in Bruges at least as early as 1419, however. He was Giovanni di Nicolao Arnolfini. His only known marriage was to Costanza Trenta, a fellow Lucchese. Their betrothal took place in 1426, when she was just 13 years old; and their marriage presumably followed not long after (very early marriage was then common)—too early to be represented in the double portrait. To complicate matters, a letter by Costanza’s mother testifies that she had died by 1433.

In light of these facts, the Scottish art historian Lorne Campbell (then a research curator at the National Gallery) suggested that the work represented Giovanni di Nicolao with a second wife. No record of a second marriage has been found, however.

More crucially, Campbell argued that the painting was simply a secular portrait, unrelated to the sacrament of marriage. His interpretation is reflected in the work’s description on the National Gallery website, where key details are viewed as merely “proclaim[ing] the couple’s wealth and social status.”

That mundane reading was echoed by the art historian Carola Hicks in her 2011 book “Girl in a Green Gown.” In her view, van Eyck’s “meticulous depiction” of the couple’s “expensive clothes and other status symbols” mainly served to reveal “a burgeoning consumer society reveling in vigorous international trade.”

The glaring problem with such a mundane view is that it ignores the work’s expressive aura—the qualities that fall under what Panofsky had astutely identified as the “primary or natural meanings” of a work of art, which emerge from “both the factual and the expressional” content. As he observed, an “atmosphere of mystery and solemnity … seems to pervade” the Arnolfini portrait. The couple “do not look at each other yet seem to be united by a mysterious bond, and the solemnity of the scene is emphasized by the exact symmetry of the composition”—and by their somber facial expressions, I would add.

Moreover, the husband’s raised right hand appears to be a “gesture of solemn affirmation,” one “invested with the … humility of a pious prayer.” Also significant is the portrait’s setting in the “hallowed seclusion” of the couple’s bedchamber.

In “Who Says That’s Art?” I argue that such qualities are what “ultimately make [this] a great work of art, a compelling image that transcends the particular historic moment being represented and conveys something about the gravity of marriage in general.” Scholars bent on discrediting Panofsky’s symbolic interpretation lose sight of those qualities, however. For example, in answer to the key question: Why do we still so like the portrait? Carola Hicks’s husband has reported (she died before completing her book) that she would have said that its “[technically brilliant] precision, clarity and luminosity” are what make it “particularly appealing to us today”—that the image was (as he puts it) “primarily designed to show off social status, wealth and importance.”

Quite a different view based on the latest documentary evidence had been offered by the art historian Margaret L. Koster in 2003, however. She argued that the picture represents Giovanni di Nicolao and Costanza—not at their wedding but sometime after her premature death, which had very likely been in childbirth. Thus it would have served as a memorial to a presumably cherished wife, lost at the tender age of 20. Koster supports this ingenious reading with an informed analysis of the painting’s iconography.

Whereas Panofsky had interpreted the single candle burning on the left side of the chandelier above the couple as signifying the “all-seeing Christ,” and had noted the frequent use of a candle in marriage ceremonies, Koster points out that a second, spent candle is faintly discernible on the right side of the chandelier nearer the woman. She very plausibly argues that the burning candle signifies that Giovanni was still living, while the spent candle betokens Costanza’s demise.

In addition, while Panofsky had identified the figure of St. Margaret carved on the high-backed chair behind the wife as the patron saint of childbirth, Koster further suggests that it alludes to Costanza’s death in childbirth.

Also viewed by Koster as alluding to Costanza’s death is the monster carved on the bench directly behind the couple’s joined hands, as if “threatening their union.” Further, infra-red evidence indicates that the monster figure was among other relevant details added late in the creative process, prompting Koster to suggest that the painting had been begun as a straightforward portrait while Costanza was alive and was revised after her death.

We may never know the precise intention of the Arnolfini portrait, for it would depend on evidence that may never be available. What is available to us, however, is the core of meaning discernible from the work’s expressive content. However intended, what the Arnolfini portrait movingly conveys is a sense of the gravity of conjugal union. That core meaning emerges from van Eyck’s incomparable handling of the work’s primary, “natural” subject matter.

In the end, that is what most matters in a work of art. A technically proficient hack could depict a lavish domestic setting and pepper it with symbolic details. The true artistry lies in conceiving and creating such an emotionally compelling image.

Michelle Marder Kamhi is co-editor of Aristos, an online review of the arts. Her most recent book is “Bucking the Artworld Tide: Reflections on Art, Pseudo Art, Art Education & Theory.” This article is based on one previously published on her blog, “For Piero’s Sake,” at mmkamhi.com

Arts & Culture
The Splendor of 'The Charterhouse of Bruges: Jan van Eyck, Petrus Christus, and Jan Vos' Exhibition at The Frick Collection