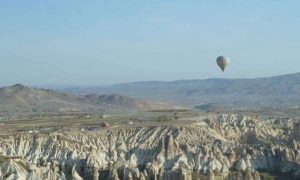 The Unbearable Lightness of Ballooning

Ballooning started for Chris Healy when he was 13 years old. A hot air balloon flew over his house in Middletown and he jumped on his bike and peddled as fast as he could to the landing site about a mile away.

After it landed, the pilot asked young Healy to give him a hand with packing it up. Seeing how industrious Healy was, the pilot offered him a job as ground crew on the spot and Healy accepted just as promptly.

“So for years I was this young guy following this old guy in a balloon, and then he taught me how to fly. I was 18 when I got my [balloon] pilot’s license in 1986, and it’s just always been there for me,” said Healy.

The years flew by and Healy just came to the realization that now he is the old guy in the balloon being followed by the other young guys in his crew on the ground. One could say that things have come full circle.

Healy and his partner Deana DeRosa now run their business called Above the Clouds with Healy being the pilot and DeRosa maneuvering the administration on the ground. In fact they even met on a balloon, one fateful day, when DeRosa was a passenger on a fight that Healy piloted.

We witnessed the afternoon flight on a balmy Friday evening on May 29 with one of the biggest balloons that the company uses. It carries nine people.

“When you’re aloft, the lower Hudson Valley is just beautiful. You have the bridge to the north and the back side of the Palisades to the south and it’s just beautiful rolling hills and farmlands—it’s a very pretty area,” Haley said explaining that on the Friday afternoon balloon flight they topped off at 1500 feet and started descending until they landed at Randall Airport in Middletown.

Leoann Tansey was one of the eight passengers on that Friday evening flight. She has always wanted to fly in a hot air balloon and got her wish as a 40th birthday present from her two young boys and her husband.

“It was amazing. I’m still smiling when I think about it,” she told the Epoch Times one day after the flight.

She said that her children also found the experience “really, really exciting” as they watched the balloon ascend, followed it along the highway, and also saw it descend with their mom delivered safely back to them. Needless to say, they are now just as keen on flying in a hot air balloon as their mom was.

Tansey recounted that “the landing was like sliding along the grass and it was smooth, not jolting at all,” she said, in contrast with airplane landings where you feel the tires hit the tarmac.

At the end the passengers were served a champagne toast which ended the journey on a celebratory note.

Balloon flights are generally 45 minutes to one hour, and most flights cruise at 1000-2000 feet.

Healy’s personal highest was a 12,000-foot flight when he was younger, but he said that there’s no limit as to how high one can go in a balloon, and there are no risks, except that after 12,000 feet one would need to be equipped with oxygen. But for such high altitude flights to take place there have to be specific weather conditions that don’t happen very often. To prove his point, he said that the altitude record for a hot air balloon is 102,000 feet.

Can Birds Puncture a Balloon?

For people contemplating balloon flying it’s easy to image the dangers, be they real or of the cartoon kind, where a flock of birds punctures the fabric with their beaks, or gun-toting Elmer Fudd shoots the balloon down accidentally.

Healy is quick to dismiss such imaginings by saying that there’s actually no risk whatsoever. In fact Healy explains that the balloon already has vents that are 15 feet long and 2 feet wide in its sides to allow for steering, and it is not a case that the balloon is totally airtight for it to be able to fly. It has such volume that no punctures are going to damage it or dramatically affect the flight.

Apparently, there’s no feeling of movement, so for people prone to motion sickness this will not make them queasy. As far as having fear of heights—that’s another story. If you feel vertigo coming on just by looking at the brochure, chances are you wouldn’t even be contemplating wafting in the wind at hundreds of feet above the earth anyway. But Healy does say that even if one is afraid of heights, flying in a balloon is easier to do because it’s not like being up on a tall ladder where you’re afraid of falling.

“I say to people that if you can stay still and breathe, you can do this. There’s nothing to it. You stand still and the earth passes beneath you,” said Healy.

According to his partner DeRosa, piloting hot air balloons is second nature to Healy, who has been flying for over 28 years without incident.

As far as the technical aspects of flying a balloon, they are rudimentary compared to flying an airplane.

The pyrometer (a remote temperature sensing thermometer) at the top of the balloon tells Healy how hot it needs to be to fly level, or to go up and down. “It’s 8th grade earth science,” he said, explaining that it’s all a matter of heating and venting (letting the hot air out of ) the balloon. The GPS on board also helps him to steer the balloon to a specific place for landing. If the wind picks up there are plenty of fields where they can land but there’s no such thing as flying “too far” because they carry two hours worth of fuel and they can descend anywhere there’s space.

“So it’s a very peaceful and very calm experience and anybody can do it,” he said.

The company allows children that are at least 7 years old but they do make exceptions for younger ones if the parents are confident that their child will be able to enjoy the experience.

Most of their clientele is from New York City, Long Island, and Westchester. On a clear day, you can see the New York skyline.

For anyone wants to try but still has reservations, it helps to know that if a flight is scheduled and there are strong winds, they just don’t fly. End of story.