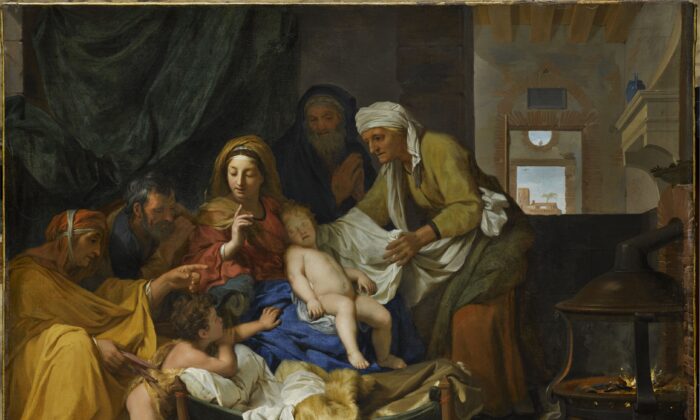 The question pulls at the mind as tight as a stretched canvas: Given his legacy as an exceptional painter, art theorist, and founding member of the French Royal Academy of Painting and Sculpture, why is Charles Le Brun (1619–1690) not given attention on par with Nicolas Poussin or Peter Paul Rubens?

Anyone in love with the rich paintings of Baroque art will inevitably engage with its grand masters such as Poussin, Rubens, or Anthony van Dyck. Vast numbers of exhibitions, publications, and even films have shaped our perception of biblical and mythological scenes, further branding these scenes into our collective consciousness.

But what about the influential powerhouse of the Baroque era: Le Brun?

Louis XIV and the Palace of Versailles

Although the Baroque style originated in Italy, it expanded west and soon dominated the French court, centered at the palace of Versailles. The grandeur of the palace itself also fills volumes of books, with no name more mentioned than Louis XIV.

Louis XIV was no ordinary king. His entire life revolved heavily around the classic arts. For example, he was essential as one of the four people to have paved the way for French ballet. In fact, Louis appeared on stage in 1653 as the sun god Apollo, and this event led to the coining of his nickname the Sun King.

As for the art of painting, anyone who has visited the hallowed artistic halls of Versailles has surely been thunderstruck by the magnitude of the palace’s frescoes. But visitors may be surprised to discover how little literature is available about the artist who created them.

The Genius of Charles Le Brun

Even photographs of Le Brun’s paintings attest to the artist’s genius. However, they hardly do justice to the awe-inspired walk through the Grand Gallery in Versailles.

Large arched doors invite viewers into halls that offer an experience like none other. The decorative elements of the architecture merge seamlessly with the murals, which transport guests to glimpses of otherworldly, even celestial realms.

In the monumental work “The Fall of the Rebel Angels” at the Musée des Beaux-Arts de Dijon, Le Brun painted the scene from the Bible’s book of Revelation. The painting shows triumphant angels surrounding Archangel Michael, who strikes rebellious angels, sending them swirling around the evil dragon and into the spiraling abyss.

The composition of the painting leads the viewer from high contrasting colors of multifigural masses toward the center of a bright open space, giving the illusion of many layers of height.

In effect, we are taken in and become part of the scene. We experience this overturning of evil and reconstruction of cosmic law as if it were unfolding in our very time and space.

We can observe the outstanding treatment of intertwined bodies falling into chaos, dramatically entangled with the dying body of the beast.

A more intimate scene, on display at the Louvre, depicts Le Brun’s “The Sleeping Christ” (1655) in a masterfully arranged composition bathed in warm light. The sleeping Christ child resting in mother Mary’s arms shows exceptional handling of body weight. The child is being soothed by the love of his mother and that of the surrounding figures. His marble-like appearance lays gently in an arrangement of red, blue, and white drapings, giving him an ethereal presence.

These examples give insight into the work of a genius capable of  versatile techniques and subject matters, ranging from monumental, multifigural dramas to intimate, emotional scenes executed with great mastery.

Why Is Charles Le Brun Forgotten?

Besides the incredible vast body of work the artist left behind, Le Brun’s art theory shaped how art was taught academically all over Europe, finding its way into ateliers worldwide to this day.

Yet the last exhibition explicitly honoring Le Brun in Versailles was as far back as 1963. In English, there is only one biographical publication from 2016 by Wolf Burchard titled “The Sovereign Artist: Charles Le Brun and the Image of Louis XIV.”

To answer why this genius is no longer celebrated, we need to understand how we mythologize artists and how we understand history. First, Charles Le Brun’s promotion in 1664 to the position of First Painter to the King made him a dedicated and powerful man. Therefore, Le Brun’s name is seldom mentioned outside of France because he is closely associated with the Sun King, and that name carries the political baggage of “absolute monarchy.”

The term “absolute monarchy” later was stigmatized and used to ignite the French Revolution. With the fall of the regime, so fell the prospects and legacies of many professionals of the empire. The post-revolutionary stigma seems to have stuck with the artists behind the creation of Versailles and, above all, damaged the reputation of Le Brun.

When an artist simultaneously plays the role of a leader in his field, we seem to have been trained to doubt his artistic integrity. However, Le Brun was perfectly positioned and given free rein at the height of a flourishing art era to follow an established lineage of traditional craftsmanship. Therefore, he naturally aligned his vision with the king’s grand endeavor.

The claim of art historian Anthony Blunt, who called Le Brun “a dictator of the arts in France” and therefore cast him as a second-rate artist, seems to rely on political association rather than a sincere evaluation of his art.

However, there seems to be more. Le Brun does not fit into the romanticized image of the ever-struggling artist who depends on the generosity of numerous patrons. And nothing in his biography reveals any scandalous stories that art historians could have used to embellish mystery surrounding the master’s vita, such as is the case with Caravaggio or Bernini. Le Brun was honored rather than slighted in his own time.

Touching Us Through Universals

What matters most in experiencing artwork in a meaningful way is through asking the question “How does the essence of the artwork affect me as a viewer?”

Charles Le Brun’s works are not just paintings or murals. They reach deeper. Looking up into the worlds he created, we see glimpses of genius. They tap into something more universally spiritual than society’s ever-changing events, which are forgotten in the noise of war and revolution.

As civilization has developed, sometimes true treasures disappear from our awareness. Yet it is only a matter of time before humanity, longing for inspiration, turns to look back and admire the many wondrous achievements that our civilization has to offer.

It’s not even a matter of unearthing these treasures. All we have to do is keep our eyes and heart open and recognize when timeless beauty speaks.