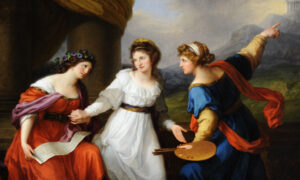 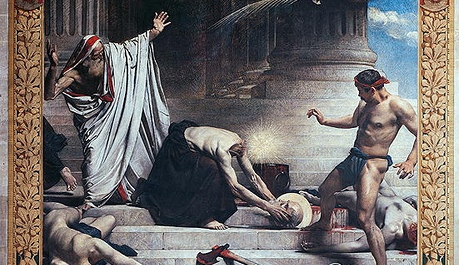 The True Victory of Holy Devotion: ‘The Martyrdom of St. Denis’

I came across a painting by the 19-century French academic painter Léon Bonnat titled “The Martyrdom of St. Denis.” At my first glance, this painting was a gruesome representation of a beheading. As I looked longer, however, I became morally inspired.

Who Was Saint Denis?

As legend has it, Saint Denis (Dionysius) was converted to Christianity under the Apostle Paul. After Paul’s death, Pope Clement I sent Dionysius with several other bishops to Gaul to convert pagans to Christianity. However, the bishops were arrested in France by the Roman emperor, who was set on persecuting Christians.

Soldiers were instructed to take the captured bishops and behead them on the slopes of Montmartre. The soldiers followed the orders and decapitated the prisoners in their custody.

When they got to Dionysius, however, his faith was so great and so deep that he stayed alive after he was beheaded. Dionysius picked up his severed head, which continued to recite psalms, and walked for two miles to his final resting place.

‘The Martyrdom of St. Denis’

Saint Denis is shown in the middle of the lower half of the composition. He has just been beheaded. But instead of lying on the ground lifeless, he bends over to pick his head up from the ground. A halo surrounds his head, and light shines where his head used to be.

The executioner is shown to the right of Saint Denis. He has dropped his bloodied ax and leans back in surprise. Another figure behind Saint Denis throws his hands up in disbelief.

The executioner has had a busy day: On the bloodied steps lie two decapitated bodies at the right and left edges of the composition. A second decapitated head, at the bottom right of the design, has a halo around it, suggesting that it most likely belonged to one of the bishops.

An angel coming down on a cloud can be seen at the top right. The angel carries a palm branch and laurel crown, which represent Saint Denis’s victory over death.

The True Victory of Holy Devotion

What, then, does the body represent? The body is often associated with carnal desires and pleasures. The mind tries to control the body, but often the body distracts the mind.

Is it the case that this depiction of Saint Denis may provide us with the moral lesson that the mind must separate itself from the carnal distractions of the body? Is this what is necessary to lead a holy life?

Let’s take a closer look at the head itself. There are two decapitated heads: Saint-Denis’s and another’s at the bottom right. The head at the bottom right is grayer in color, making it look more lifeless, and it has a thin halo. In contrast, Saint-Denis’s head has more color and even looks at his body, and the halo around his head is completely filled with golden light.

The fullness of the halo likely represents a greater dedication to the holy life; otherwise, why paint the two halos and heads differently? If this is the case, then a greater commitment to the holy life provides life where there would otherwise be death.

As the legend says, even after decapitation Saint Denis’s head recited divine words. His devotion completely influenced his consciousness, wisdom, ego, intelligence, rationality, and so on. He was so committed to holiness while alive that his dedication continued after his head was separated from his body.

Interestingly enough, his dedication to the holy life also seems to influence his body. Bonnat depicts the moment that Saint Denis’s body reaches down to pick up his head. A light shines where his head once was. How does his body know where his head is?

Is it his devotion to the divine that harmonizes and somehow connects his body and mind, the two things that, above, we suggest are separate? And does the light that shines where his head used to be represent his devotion? Does this light guide his spirit, his soul?

Is it this type of devotion that brings true victory, represented by the angel? Saint Denis could have fought back, argued, and pleaded for his life. None of these would have guaranteed him success.

In reciting the psalms, he is genuinely focused on God, and death doesn’t concern him. He is unafraid of death, and this fearlessness in God is what brings him true victory.

The result of Saint Denis’s holy devotion astonishes his executioner. How might we use our faith to astonish those who wish us harm?