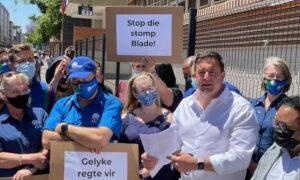 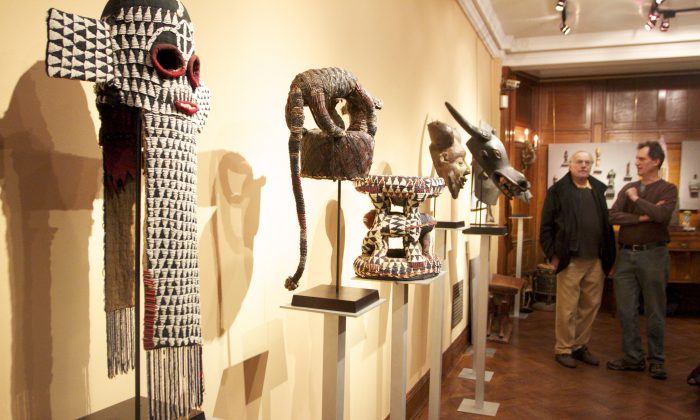 NEW YORK—In Africa, as in the rest of the world, the state of tribal art is rapidly changing, and for the most part, the Western world seems to be oblivious.

Originally created for ancestor worship, spiritual rituals, or to celebrate a tribe’s unique identity, tribal art objects have been losing their reasons for existing. Modern life, conversion to Christianity and Islam, and a globalizing economy make it difficult for small-scale societies to continue traditional ways of life.

Meanwhile, without the benefit of celebrity patronage, a new art movement, or even of empire, art created by anonymous tribal artists do not garner the attention of the general Western public. Without a grasp of specific tribes’ beliefs, lifestyle, and environment, most people are left with only a decontextualized stereotype for a mental image.

Yet, opportunities for first-hand learning about tribal cultures are dwindling. Climate change, governmental policies, and industry threaten the resources that many cultures depend on.

Cut off at the Source

“For the most part, none of these groups practice the ritual ceremonies that occasioned the production of this type of material,” said Seattle-based Peter-Michael Boyd, referring to cultures in sub-Saharan Africa. He has dealt in art of the region for 30 years.

I met him at the Madison Ancient and Tribal Art show, which held its first-ever fall show at the Arader Gallery on the Upper East Side on Nov. 13–16. Most of the dealers who participated in the fall show deal wholly or partially in African art.

The three I spoke to all conveyed the idea that traditionally made African antiques are rare, and getting rarer. Part of their disappearance is related to the loss of tribal cultures themselves.

Many cultures had no written language and relied on oral history, so continuation of cultural heritage has been spotty, depending on the circumstances of each culture.

“Some cultures are fairly well understood because traditions and oral histories were passed down through the generations and recorded during the colonial times,” Boyd said.

Colonialism has had a complex impact on African art.

Since European colonizers and missionaries arrived on Africa’s shores in the 1400s, they encouraged or forced the destruction of many native artworks, many of which they considered idolatry.

“Lots of the art was created for shamans to heal, predict the future, and perform rites for good harvest,” said James Stephenson, who has bought and sold African Art for 20 years, speaks fluent Swahili, and has spent 20 years living in Tanzania.

Recent missionaries have not been as quick to reach for the torch. Stephenson has bought artwork from them and their descendants over the years.

“Most were passed down through the generations and sold by people who wanted to send their kids to school,” he said. “Christianity or Islam had come in and people were just going to burn all these objects, but missionaries saved them and passed them down in their families.”
Even works that have survived the cultural atrophy rarely survive.

Many of the objects Stephenson and other MATA dealers exhibited were made of wood, a traditional material that by nature is subject to the ravages of termites and other insects. A 1987 article in the New York Times described African museum conservators’ struggles to preserve wood artwork.

Conservation is even more critical for older pieces. Stephenson deals mainly in objects created before 1900.

“What might be created now would not be at the same level of craftsmanship or [made] for the same purpose,” he said. “The men and women who created these believed in it 100 percent so they made it with their whole heart. That’s how you discern what’s real and what’s not—you have to develop the visual understanding and nuance. Someone who’s copying it doesn’t do it with the same care.”

According to Neagele, when tribal communities lived in relative isolation, one purpose of art was to display a visual vocabulary that defined who these people were and who they were not. The cultures and their neighbors could tell from the tools, symbols, and personal adornments who belonged to which group, even if differences were indistinguishable to foreigners.

“Over time, with better roads, villages grew and bumped into each other and some of these differentiations begin to break down and people begin to absorb and see the same influences—magazine, newspapers product packaging—and these things make people more like one another. So [the art becomes] less distinct, more generic,” Neagele said.

Even the most isolated societies are changing. Neagele related a conversation he had while traveling in New Guinea:

“I remember a man asking me why I came to his isolated village. I told him [through a translator], ‘I’m interested in seeing old ways.’ He said, ‘Well, you’ve come to the wrong place. We’re modern people now. We’re Christians.’”

The man was wearing a loincloth which, Neagele guesses, will be traded for shorts in the next generation.

Though tribal people are increasingly turning to (or being forced into) a modern lifestyle, tribal art—or at least tribal-looking art—is still being produced as souvenirs and home décor.

Fifteen years ago Boyd discovered in an airport shop some New Guinea masks, each hiding on its reverse side a gold sticker that read “Made in Thailand.”

This is the paradox: as economies globalize, items like these gift shop masks become more prevalent while the objects actually used by tribes in daily life become obsolete.

Thus authenticity becomes a particular concern. But how will people differentiate real from fake if they don’t understand the cultures where these objects purportedly came from? And what happens if enough people decide they don’t care about an object’s origin?

“There’s far less material available and the committed collectors have simply died off—there doesn’t seem as much interest among people in the material culture of Africa,” Boyd said. “These go in cycles always. There are peaks of interest.”

Boyd said there used to be many more public galleries for African art, but due to crushing operational overheads, many dealers today show privately by appointment and rely on multi-dealer shows like MATA. The balance is less overall exposure to the general public.

The West first came into contact with African art through the colonial campaigns of the mid 1800s that brought loads of objects to Europe. There, they were thought of as artifacts of colonized cultures, and “held so little economic value that they were displayed in pawnshop windows and flea markets,” reads an essay on the Metropolitan Museum’s Heilbrunn Timeline of Art History.

These items were purchased as curiosities of “primitive” cultures, a term that reflects a Eurocentric view of art and civilization. The assumption was that tribes didn’t reproduce accurate representations of natural forms because they couldn’t.

Then came Picasso and Braque, who took what they saw as abstractions in certain African sculptures and masks, and incorporated them into their paintings. Cubism was invented.

“That’s what started to elevate the value of these objects—people bought them because it was a way of getting something that was Picasso-like without paying a modern art price,” Neagele said.

To this day, African masks and sculpture that exhibit this “cubist” look—native only to some tribes—are more easily welcomed among Westerners, added Boyd.

The complicated relationship between the art-buying modern West and tribal cultures is fraught with debates over authenticity, cultural legacy, and the ongoing effects of colonialism. As the state of tribal art continues to evolve, an attitude of genuine curiosity is always welcome.

“I would rather sell to someone who cares about the place. These objects resonate with me—I can see the environment in the piece,” Neagele said.