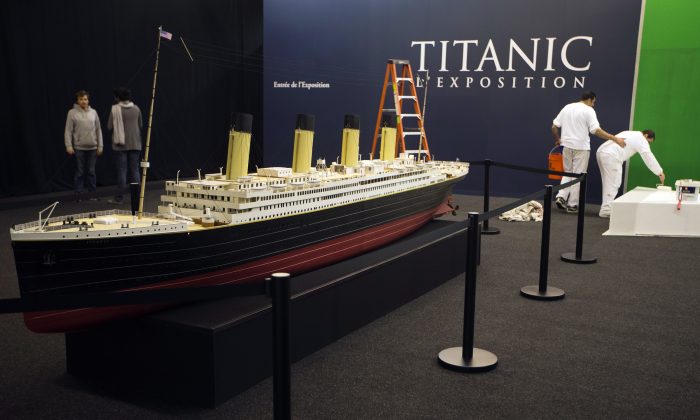 Workers finish setting up an exhibition dedicated to the Titanic, at 'Paris Expo', on May 31, 2013, in Paris. (JOEL SAGET/AFP/Getty Images)
Australia

The Titanic II Scheduled to Set Sail in 2018

The Titanic II will be built after all.

In 2012, Australian billionaire Clive Palmer announced that he would build a functioning 1-to-1 scale replica of the Titanic, the BBC reported. The ship was to begin construction in China in 2012, the 100-year anniversary of the Titanic, and set sail in 2016, but it never materialized, and some wondered if the project was dead for good.

However, a spokesperson for Palmer recently clarified that the project is not dead, just delayed, and that the new completion date is 2018, the Belfast Telegraph reports.

The Titanic II will be constructed to resemble the original Titanic as much as possible.

The Titanic II will be constructed to resemble the original Titanic as much as possible, but it won’t be completely identical due to regulatory reasons.

“The new Titanic will of course have modern evacuation procedures, satellite controls, digital navigation and radar systems and all those things you’d expect on a 21st century ship,” James McDonald, the global marketing director of Palmer’s company Blue Star Line, told the Telegraph.

Unlike the original Titanic, which sank on its maiden voyage from Southampton to New York, the replica will head off from Jiangsu, China, to Dubai in the United Arab Emirates.

Palmer’s company Blue Star Line said that they have been inundated with requests from business partners wanting licensing deals and potential passengers, with some offering up to $925,000 to be on the maiden voyage.