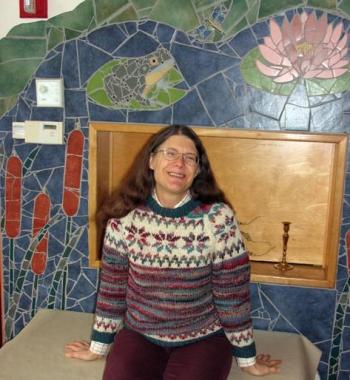 The Teleology of Julia Morgan’s Life

Julia Morgan was born in Swansea, Wales. The family immigrated to Canada when she was 2.
An older sibling, Jeremy, died in a crib death. This left the mother, Molly Morgan, mindful of the safety of her daughter Julia.

At 16, Julia ran away from home. She says, “Largely to get out from my mother’s grasp.”

To my observation that her mother’s influence had given her a solid grounding in yoga, meditation, and rectitude, Julia responded, “Having run away from home because I was rejecting my mother’s attempt to steer my life, I find myself strongly reactive to your observation. In my early years, she had a strong influence on me, but by puberty, quite the opposite was true. I experienced an ‘about face,’ and headed in a very different direction.”

The mother’s voice was in her. At each crucial step, it moved Julia to the next stage.
Julia insists, “But only when I was a child.” For example, “If I didn’t finish my supper, my mother would say, ‘Think of all the starving children in India.’”

Many a mother has urged children to eat their dinner with just those words. In Julia’s case, she wondered, “Why do some people have a great deal, while some others would have so little? It instilled in me a desire to help others less fortunate—which later, in its turn prompted me to go into social work.

“One of the books that my mother felt moved by, and I did also as a result, was The Autobiography of a Yogi, by Paramahansa Yogananda.

“My mother felt very moved by the nonviolent approach of Mahatma Gandhi and by the benefits of yoga and meditation.”

Starting from preschool years, Molly was Julia’s best reality instructor. Julia explains, “She certainly made a strong impression on me in my early years, but her rejection of my strongest inclinations, to become either a singer or a veterinarian, also had a very negative effect, squashing what I felt I would have loved to have done.

“In my pursuit of a career, I wanted to be a singer. But Mother dissuaded me. Next I wanted to study dance. Modern Dance appealed to me. The more involved I became in the modern dance program at York University, the more I felt that the students and faculty were too focused on having just the right body size and shape.

“They were competing to look better than the person next to them. This steered me in quite the opposite direction from my strengthening interest in yoga and meditation.

“Feeling the need to choose between the two, I decided to quit the dance program and move into an ashram in Ottawa. As much as I benefited there from my practice, I didn’t accept the idea that the guru of the group I was in was regarded as a God incarnate, which left me seeking a change in community.”

This is a problem for many Westerners seeking transcendence in the Eastern way. In the West, divinity descends from above, from the Highest Good, but in the East, you and I could become Buddhas by attaining the Highest Good through practice and cultivation. If you look at traditional Western Art and compare it to Asian Art, you will notice the aesthetic consequence of the two worldviews.

For Julia, her practice site, The Ontario Farm, sister to the Tennessee Farm, was her next choice. She says, “I landed on the doorstep at the same moment as my husband, Rod. I was immediately struck by our great connection, and we were greeted at the door as if we were a couple. In no time, … falling in love was like falling off a log.”

I asked her what she liked about living in EcoVillage with her family. She said, “I value living in an intentional community.”