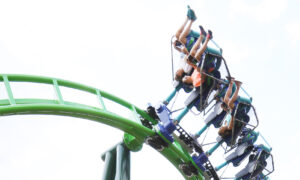 A farm stay is a new vacation option that is gaining popularity among city dwellers. Ditching the hectic city life for the countryside and waking up to sweet mountain air is a thoroughly amazing experience. Most importantly, there is no pressure to do anything and no travel itinerary to rush through. You do what you feel like, when you feel like it.

En route on our maiden trip to explore the rich cultural and natural treasures of Central Taiwan recently, we embarked on a weekend trip to Qingjing Farm in Nantou. Situated in the Renai township of Taiwan’s Nantou County (the second largest county in Taiwan), Qingjing Farm is the only farm that sits in the high mountains.

Our trip there involved traveling by bus for about an hour up a steep and winding road, where the air gets fresher and lighter as the altitude increases.

If you are lucky, you may see what many other tourists have encountered: “The endless sea of clouds.” From our lofty vantage point, the clouds around nearby mountains were at eye level. As we watched, fluffy layers rose up and filled the spaces between peaks, forming a spectacular sea of clouds that stretched beyond the horizon.

Along your journey, you may also stop to purchase some of the area’s specialty products—mountain tea leaves and cabbages. Due to the cool temperatures up there, the organic cabbages are quite fresh and crunchy. Life’s much healthier out there, I guess.

Enjoying a mild temperature of around 16 degrees, the farm produces a fascinating range of flowers, fruits, and plants such as honey peaches, sakuras, or cherry blossoms, and maple trees, all of which take turns to dress the landscape in ever-changing attire: flowers in the spring, fruits in the summer, colourful maple trees in autumn, and snow in the winter.

Green, Green Grassland
Green, Green Grassland, one of the most popular tourist attractions at the farm, is famous for its vast meadow that lures occasional flocks of grazing sheep and goats. Set against a backdrop of beautiful valleys and an endless mountain range, the quaint grassland, with its refreshing breezes, makes you feel as though you are in a dream.

Such a phenomenon explains why tourists the world over rank Qingjing among the top destinations for a highland holiday or summer vacation, earning the farm the title of “a haven above the clouds.”

The endless flow of tourists every year makes Green, Green Grassland the most popular tour venue on the farm, where everyone in the family, from young to old, come to enjoy life’s simple pleasures.

One of the most popular spectacles there is the sheep-shearing show. At the start of the show, a flock of sheep was chased onto the stage, coming into close proximity to the audience and delightfully surprising us city dwellers.

While we believed that the sheep were clueless about what was happening, most of the time they were nonetheless camera-friendly and cooperative with photographers. The most exciting part came when the sheep shearers from New Zealand shaved the furry, farm animals for the audience’s enjoyment.

As though subdued by the shearer’s charm, the sheep obediently (and powerlessly) stayed in place as the shearer deftly manoeuvred the shaver all over its body. The innocent expressions on the sheep’s faces also brought forth whispers of “Aww” or “Ouch” from the audience, and the sheep quickly captured everyone’s hearts. Throughout the session, the jovial Mandarin narration by the New Zealand shearer elicited tons of laughter from the crowd.

If you prefer to simply enjoy the tranquility and beauty of the farm, you may choose to take a stroll along the Xumu trail and sit on the meadow to view majestic Qi Lai Mountain, fly a kite, or run along with the wind. With a distance of 500 meters, the trail takes about 30 minutes to walk.

Hasake Horse-Riding Show
Introduced on the farm in March 2011, the Hasake horse-riding demonstration show is another highlight. The Hasake tribe that lives by the mountain lakes is a group of primarily sheepherders.

For hundreds of years, at the start of summer, the tribesmen have taken their tents and led their flocks of sheep from the Gobi Desert into the mountain ranges to reside along the mountain lakes. As most of the tribesmen are herders and often need to be ready to defend themselves in the wild, the mastery of such horse-riding techniques is crucial for their survival.

In their early twenties, young Hasake riders showcase the unique skills used for battle, celebrations, and games in the arena. Some of the techniques include changing riding positions from the front to the side to the back and under the horse, bending down to pick up items from the ground, and forming a human pyramid on two horses.

By incorporating acrobatic elements into their act, the Hasake tribesmen keep the show lively and exciting from beginning to end.

Starry, Starry Sky
As dusk falls, the richness of the starlit sky is spectacular and mesmerizing in the absence of light pollution. Glittering brightly, these massive heavenly bodies form familiar constellations.

“Constellations always remain the same, but during the course of the night you will see them move across the sky from east to west,” explained Mr. Liu Yuan-Jung, director of Qingjing Farm. “This is because the earth is rotating and during different seasons you will see different constellations in the sky.”

Remember to keep your wishes in mind since, with a bit of luck, you might catch a glimpse of shooting stars blazing past in fleeting, brilliant streaks.

To know find out more about Qingjing Farm, visit: www.cingjing.gov.tw