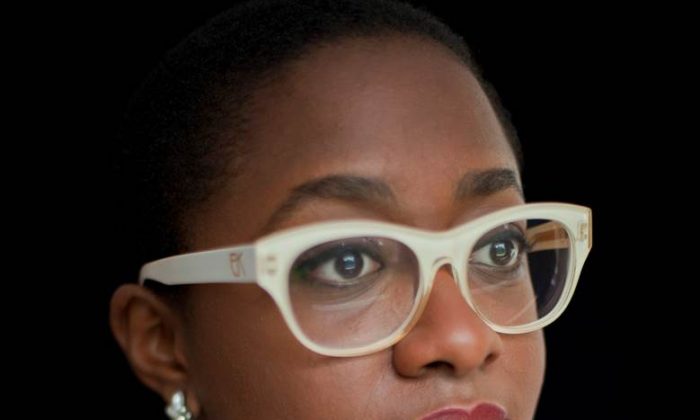 Cécile McLorin Salvant, who just turned 26, has been hailed as the most exciting jazz singer to appear in years. She won the 2010 Thelonious Monk International Jazz Vocals Competition and her first U.S. album, “WomanChild,” was nominated for a Grammy Award in 2014. Now, she has released her follow-up CD, “For One to Love” (on Mack Avenue) and she performed the whole album at Jazz Standard, wearing her signature big-framed glasses.

Salvant had the same outstanding backup group as on the recording: Aaron Diehl on piano, Paul Sikivie on bass, and Lawrence Leathers on drums. The multi-talented singer even supplied art work for the CD.

What first sets her apart from most of her peers is the power, range, and beauty of her voice, most often compared to Sarah Vaughan. Yes, she can put on the girlish tone and then drop down into baritone territory as the divine Sarah did, but there’s also a Betty Carter influence, reflected by the elasticity of her phrasing.

In addition to her extraordinary voice, she possesses dramatic flair (more so than either Vaughan or Carter), wit, and a historian’s knowledge of American music. She is as liable to pick up an obscure tune from vaudeville or a classic blues as a pop hit from the Brill Building or Broadway and she samples all of these sources on the new album.

Salvant also composed and wrote the lyrics for a number of pieces on the CD. The bonus of seeing her live is not only appreciating the fact that she can reproduce the vocal feats in a club but also hearing her comments about the songs.

“Fog” opened the live set, as it does the album. One of her own quirky creations, it begins slowly but bursts into swing. A common theme, among her own songs, as well as some of the pieces by others, is rejected love. This comes across comically in “Stepsisters’ Lament,” from Rodgers and Hammerstein’s “Cinderella.” This is the evil stepsister’s complaint that the prince prefers Cinderella to her. Salvant confided that she had watched the musical—the television production starring Brandy—over and over again when she was a little girl.

At one point, Salvant asked the audience if any were familiar with Blanche Calloway. When only a few hands went up, she dryly said, “I’ll sing this for you three.” As she informed us, Blanche was Cab Calloway’s older sister and a bandleader and songwriter as well. “Growlin’ Dan” is a funny song (with a reference to Cab’s famous “Minnie the Moocher”) that featured some virtuosic growling by Salvant that resembled Bubber Miley’s plunger trumpet work of the 1920s.

Salvant introduced Burt Bacharach and Hal David’s bouncy “Wives and Lovers” as one of the most sexist songs of all time. Though dated, it’s hardly that. Nevertheless, her version certainly subverts the romantic intention of the Jack Jones hit of the 1960s (also recorded without irony by the supreme Bacharach/David interpreter, Dionne Warwick).

Salvant’s rendition of Spencer and Clarence Williams’ “What’s the Matter Now?” (with fine solos by bassist Sikivie and pianist Diehl) is more playful than Bessie Smith’s original. While Salvant borrows from different eras, she always adds a new twist. “The Trolley Song” swings harder than Judy Garland’s original (from the movie musical “Meet Me in St. Louis”) and the tour de force of the album for the singer and the band is the extended version of “Something’s Coming” from “West Side Story.”

When she wants to sing straight, Salvant performs a French chanson: here singer-songwriter Barbara’s downbeat “Le Mal de Vivre” (The Pain of Life). Although Salvant is American, she lived in France for several years, where she studied law and baroque music.

Maybe Salvant has romantic problems (if her own songs are truly autobiographical), but audiences find her irresistible. Those interested in the art of jazz vocals will want “For One to Love” and should see her live the next time she performs in the area. Her next scheduled appearance is a Valentine’s Day show on Feb. 12, 2016 at Jazz at Lincoln Center’s Appel Room.

Also highly recommended is the Dafnis Prieto Sextet at Jazz Standard (116 E 27th Street; (212) 576-2232) from Sept. 18-20. Percussionist/composer/bandleader Prieto is the winner of a McArthur “genius grant” and his latest album, “Triangles and Circles,” confirms that he deserved the accolade.