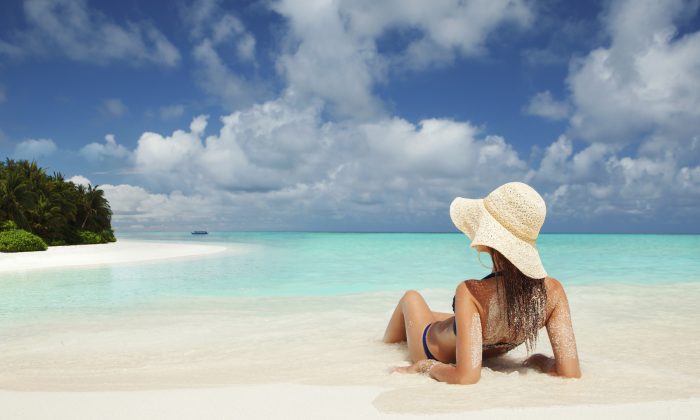 After an interminable winter, it is sunny and 86 degrees in New York. Tank tops and shorts are the couture of the day in Central Park, except for some young women visiting from Asia. They are also in summer clothes, but they are shading themselves with umbrellas, like the parasols once common in the U.S.

Before the 1920’s, a suntan in the U.S. was not a status symbol. The U.S. was still an agrarian society and a suntan meant you toiled in the fields on the country’s many family farms. To appear refined or upper class, women sought a fair-skinned look, untouched by the sun, and wore full-length sleeves, long skirts, and sunbonnets in addition to their ubiquitous parasols.

All this changed in the 1920s, when the avant-garde designer Coco Chanel returned from the French Riviera with a suntan—which was a fashion first. Chanel’s fans not only liked the look, they liked what it represented—a free-wheeling lifestyle of leisure, full of badminton, boating, and tennis. Most of America’s jobs by this point had moved indoors, and people now had telltale pallid skins from toiling in factories and textile mills, often for 12 hours at a time.

For decades there was no downside to the pursuit of a suntan in the U.S. It looked attractive and meant that someone had an outdoor lifestyle. The vitamin D from sunlight was said to be good for the body and some scientific reports suggested that suntanning released endorphins—the body’s “feel good” chemicals. No wonder it felt so good.

People slathered themselves with suntan oil and baby oil, literally “frying” in the sun with no fears of premature aging or skin cancer. Sure dermatologists periodically warned about the sun’s dangers, but no one listened. People also didn’t believe the cigarette warnings.

A turning point in the nation’s love affair with the sun came in 1997 when it was revealed that the “to die for” suntans on the cast of the TV show Baywatch, which ran from 1989 to 2001, were faux. ‘”We actually use sunless tanning lotion with a body stain,” Baywatch makeup artist JoAnna Connell told the press. Did the cast know something we didn’t know? So began the sunscreen generation.

Soon, the same companies that had made “deep tanning oils” were making total sun blocks and “self-tanners.” Increasingly, people wanted to look tan without being tan because of new health warnings—and the way the first generations of suntanners were beginning to look as they aged. Hollywood embraced self-tanners so eagerly, people made jokes about actresses who were orange-colored “tanorexics.”

Now, Americans use so much sunscreen, medical professionals worry that some people may not be getting enough vitamin D anymore. (Especially with our indoor, electronic-tethered lifestyle.) While those experts recommend losing the sunscreen for a few minutes a day, others recommend more sunscreen, saying people don’t use enough to really protect themselves. Adding to the confusion, other medical experts caution that ingredients in sunscreens like retinyl palmitate, titanium dioxide, oxybenzone, and even zinc may be as harmful as the sun’s rays.

And there is another twist in the suntan’s popularity. Even as Americans have a new regard for the sun’s dangers, tanning salons have become a growth business, especially among the young. Almost three in 10 white girls of high school age use tanning beds, reports the New York Times, and over half of them used sunlamps more than 10 times in the last year. Melanoma has risen by 50 percent in the 15 to 39 age group and is 75 percent more common in tanning bed users.

Just like cigarettes, which no one believed could be harmful when they tasted so good, tanning beds will soon carry an FDA black-box warning that they should not be used by anyone under the age of 18.