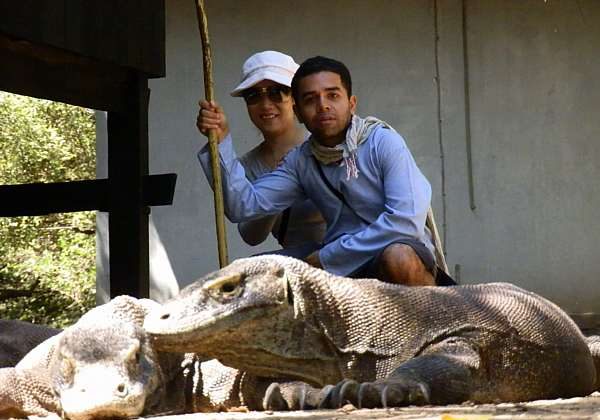 The Strange Lives of Komodo Dragons

At the airport in Labuan Bajo, there were glamorous pictures of Komodo Dragons everywhere. One was posing in front of a secluded beach. One was looking back at a sunset.

We arranged for a small wooden boat to take us to Rinca and Komodo Islands. The crew comprised of a father and son duo, Captain Rudy and Grushal. In the bright sun, the sea, surrounding islands, and the sky provided deep contrasts. The islands comprised of small hills uniformly carpeted with lime green grass, looking rough. These islands were rather arid. One island only had a lone tree at the top of its hill. On another island, a stretch of hills had a line of trees only at the top as if they decided to climb up from wherever they were born to settle down in a line to enjoy the best vantage point.

After two hours of sailing, we reached Rinca. We saw over a hundred mangrove saplings with small cardboard signs next to each of these with names of people and their country of origin written on them. When we asked our guide, Adi, he said, “Those are the names of people killed by the Komodo Dragons. They didn’t bother to take guides and look what happened to them.” But I was skeptical of this ferocious image portrayed by the nature television channels, used to hype up any physical trait of the animals they had managed to make a film on. On further nagging, Adi relented, “Don’t worry, those were names of people who had planted those saplings under a conservation program.”

Adi took another shot at melancholy, “Women having periods better avoid visiting the Komodos. They can smell blood from far and can come chasing.” Just when I thought Adi would begin blaming the Komodos for global warming, we came across the park’s kitchen. A dozen dragons were slumbering under and around the stilted house. Adi screamed, “These are pensioner Komodos, old lazy hags hoping to get easy food from a kind cook.”

These Komodos looked uninterested in anyone around. There were seven of them, some females, which are smaller. They were far from any anthropomorphic idea of beauty. Their dotted dark brown skin had many wrinkles and at the neck. Their big claws were hooked. An inverted smile adorned their faces, like a constant pout from a century old grumpy grandmother. They were surrounded by tourists who were gasping at every small move they made: a flick of the long forked yellow tongue, a gentle nudge from their hind legs, a slow fall of a thick lump of saliva from one’s upper teeth, or a menacing slow turn of the neck to look right into someone’s eyes.

But I felt that they have a particularly adorable way of lying down with their small chubby hands and legs spread out perpendicular to their bodies. This makes it appear as if the komodos are somehow grappling on to an earth that they know is constantly rotating and that things are not as stable as they appear. And with their rather endearingly round black and shiny eyes, they seem to appeal to everyone around to join them in lying down and hold onto the ground.

Adi broke my meditation, “Tell me three similarities between humans and komodos…. Well, their babies take nine months to come out. They also suffer from bad breath. And they are usually monogamous. Ok, that’s not a similarity, is it?” he laughed boisterously, “But there are many differences too. There are four males for every female komodo. And komodo mothers can give birth without needing a man.” He looked at me, “Imagine if you were a komodo male. You will have to overcome all these struggles and then you will end up with a partner who has bad breath.”

After Rinca, we visited Komodo Island too, where there were a few dragons around water holes and on hill tops. There are around three thousand dragons left in the world, and just under half of them are in Rinca. Komodo Island had the largest population while some parts of Flores and the surrounding islands have only a handful.

As the sun was about to say goodbye, we dropped anchor at a small bay at Komodo Island in Indonesia. As I sat at the front of the boat, the sense of enormity of the landscape in its entirety started to set in. The sun was now distributing its parting gift to mankind, an array of colours in the sky. The bright green of the surrounding hills and the blue of the sea gently fell asleep. The sun left after tenderly pulling a giant dark blanket over them. A bunch of flying foxes, which locals call ‘Batman’, left the hills.

Copyright © 2014 by Vagabond Journey Travel. This article was written by Shivaji Das and originally published at www.vagabondjourney.com