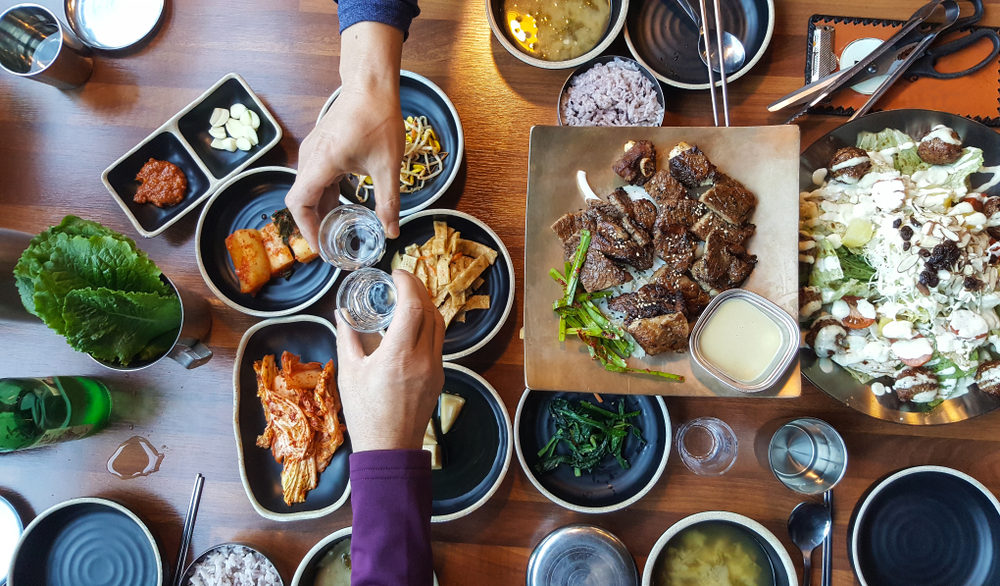 In South Korean drinking culture, soju is at the center of social gatherings and business meetings alike. (Yeongsik Im/Shutterstock)
Food

When someone mentions soju, the first image that comes to mind is usually that famed little green bottle—Jinro brand soju, the largest producer and distributor of South Korea’s national drink globally. In 2016, Jinro soju was the world’s top-selling alcohol, boasting 73.9 million cases in sales.

Despite its ubiquity, however, this soju does not truly represent what “real,” traditional soju is. In fact, most people, including experts, heavily debate what soju actually is; there is no legal definition for this clear spirit, and production does not have any standardized guidelines or rules. You can make soju anywhere, from anything, and using any process.

Soju was originally made from only rice, but most modern versions of soju are made from sweet potatoes or other starches, and are actually diluted. The tubers are fermented, and the resulting 95 percent ethanol is then diluted with water to the necessary alcohol proof, which can range from 16.8 to 53 percent. Various sweeteners and flavorings are then added to make it palatable, and the result is the popular cheap soju that most people know today.

But as Korea’s favorite spirit grows in global popularity, it’s worth getting to know a little better—beyond that glittering green bottle.

Through Feast and Famine

Soju has a centuries-old history that spans Korea’s checkered past, through feast and famine.

The origins of the drink date back to the 13th century, during the Goryeo Dynasty, when Mongol invaders brought distilling techniques they had learned from Persia to the Korean peninsula. Brewers used these techniques to fortify makgeolli, Korea’s much-loved milky, fermented rice wine, and soju was born.

The process begins with nuruk, a wild yeast starter culture, which is used to ferment rice. Then the resulting elixir, makgeolli, is then distilled to a clear liquid. The name “soju” literally translates to “fire alcohol” or “burned alcohol,” with the “fire” referring to the heat required during this distillation process.

Only pure white rice was used, which was an expensive and coveted ingredient; hence, soju was considered a luxury item. It quickly won favor among the wealthy upper class, who loved it—so much that alcoholism quickly became a problem, resulting in the government banning soju manufacturing in 1375. Still, consumption and production continued, in the form of a spirited home-brewing bootlegging culture.

During the Japanese occupation of South Korea, starting in 1910, rations and taxation made it virtually impossible for Koreans to make alcohol, especially from rice. These constraints paved the way for inexpensive sweet potatoes to be used, and introduced the dilution process—a way to create a cheap, bastardized version of soju. Even though it hardly resembled the original product at all, it served its purpose during those strained times of poverty.

After the occupation ended, producers began to distill soju again, but ultimately, further scarcity issues led the government to formally outlaw the use of rice for alcohol production in 1965. Not only did it ban the use of this precious white grain, but it also forbade all forms of distilled soju.

Manufacturers again were forced to turn to alternative cheap starches, such as wheat, barley, tapioca, molasses, and sweet potatoes, and dilution was reinforced as the norm. Thus, the soju we know now became the standard.

The government ban was finally lifted in 1999, and producers again began using rice and distillation techniques. But soju drinkers had already become accustomed to the cheap alternatives, so most producers stayed true to their low-cost recipes, only slightly tweaking their formulas to incorporate some rice.

There has been a large movement, however, to bring back traditional, “real” distilled soju, made from just rice. Certain provinces of Korea, such as Andong, are particularly famous for their handcrafted brews, and small-batch companies are actively campaigning to revive Korea’s lost artisan alcohol tradition.

Having tried both types of soju, I find it hard to believe that they are called by the same name.

For instance, Hwayo, a popular premium soju brand, uses only pure spring water and the highest quality rice from the Icheon region of Korea. They age their distilled liquor in porous ceramic onggi jars, allowing it to breathe, while playing classical music to the vessels—apparently the musical vibrations aid in the oxygenation.

The result is subtly fruity with light floral notes, a decidedly sophisticated product. It is reminiscent of vodka, but with a distinct flavor of its own, and comes in various ABVs. I can gladly neck back shots of chilled Hwayo soju straight; it is smooth and clean with a tight finish.

Diluted soju, on the other hand, tends to taste artificial, overly sweetened, and frankly, akin to cleaning solution. I admit I used to drink copious amounts of the stuff, especially as a poor student. As I have gotten older, though, my tastes have changed and now I find it rather harsh.

Only about five percent of soju sales go to the United States, but a growing number of bars and restaurants across the country are now stocking Korea’s firewater. You can find soju on hip cocktail menus from Los Angeles to New York.

I find diluted soju more enjoyable when mixed in cocktails or beer—a soju “bomb”—and in my restaurants, I used to infuse soju with various fruits and vegetables, which I found successfully masked that disconcerting ethanol aftertaste.

I also had a lot of success marketing it as a “skinny cocktail” choice, as distilled soju has a third less calories than vodka. I often substituted soju for vodka to create new drinks, like my famed kimchi Bloody Mary, and many bartenders are doing the same.

In Korea, where business and social gatherings very much revolve around drinking, soju is a cultural cornerstone. To do business together means to drink together, and the drink of choice is soju.

Many companies have monthly, even weekly mandatory work dinners called “hoesik” centered around drinking. These are considered a way to get to know someone better, an essential bonding exercise.

It is a ritual riddled with social etiquette rules as well, and knowing the nuances of how and when to drink is vital. Showing respect to elders is important, and you always know everyone’s age and rank (“How old are you?” is one of the first questions someone will ask you when meeting).

The table hierarchy is then set, and the youngest is assigned with the task of pouring drinks for everyone, always with two hands to show respect. Once everyone’s glass is full, shots are ceremoniously done together, while turning away from the eldest member, again to show respect. The whole thing is repeated numerous times—until you are stumbling home. Korean business dinners are notoriously drunken affairs.

Trends are changing, however, as Koreans are becoming more health conscious. The younger generation is drinking less, and lower-ABV beverages are becoming more popular. Tea and coffee cafes are sprouting up all over Seoul, rivaling bars for date nights and late evening social gatherings.

Still, though, there is just something so classic about soju, whether distilled or diluted. I have so many epic memories with this spirit—and my college days would not have been as fun-filled without those little shots. It makes me happy to see soju’s growing popularity around the world.

And despite my gripes, I will always have a fondness for those little green bottles.