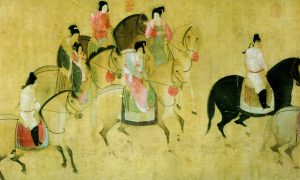 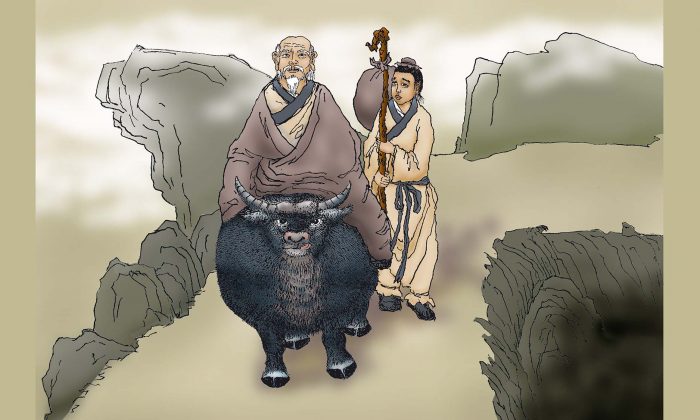 It is said that Laozi had a servant named Xu Jia who had served him for over 200 years. (Sun Mingguo/The Epoch Times)
Chinese Culture

The Story of Laozi’s Servant

The very first story in the 500 volumes of the “Extensive Records of the Taiping Era” is about Laozi.

It is said that Laozi had a servant named Xu Jia who had served him for over 200 years. But Xu Jia was not happy. He had not received his pay of 100 qian per day since the day he started work. It had been over 200 years, and every day he waited for his master to pay him. Every night before going to bed, he would calculate and tally the outstanding amount owed to him.

Indeed, Laozi had never paid his servant a single qian for the past 200-odd years. But everything was on record. Laozi owed Xu Jia 7,200,000 qian in total.

Laozi did not have a successful career during the Zhou Dynasty. During the reign of King Wen, he was a librarian, handling books and archives. When King Wu ascended the throne, again he was assigned a low-ranking position.

That did not bother Laozi. Life may have been hard, and his social status may have been low, but his mind was set on practicing the Way.

The code of etiquette and ethics that the first kings of Zhou established had degenerated by the Spring and Autumn Period. Laozi was about to leave China. He mounted a water buffalo and headed west together with his servant.

The governor of Hangu Pass was named Yin Xi. He had a relatively smooth career in the imperial court, but he was not interested in working as an official. Fortune-tellers had told him that he was destined to practice the Way. Therefore, his goal in life was to look for a master to teach him the Way. He had learned the basics of Taoism and was able to distinguish the aura of sages.

Yin Xi was studying Taoism one night when he noticed that the position of the stars had shifted. He also spotted a soft purple glow heading toward Hangu Pass from the east. He could not help but exclaim, “The sage I’ve been waiting for is heading my way!”

Laozi was traveling on a water buffalo with his servant Xu Jia behind him. The farther west they went, the more remote the land was, and the more despondent Xu Jia felt. The land beyond Hangu Pass was the Western Regions.

“Once we reach the Western Regions, there will be no way I can get my money back. Nobody has suffered greater injustice than me!” Xu Jia thought.

He decided to lodge a complaint against Laozi to the authorities at Hangu Pass. There was a man at the inn who made a living by writing letters and complaints for others. Xu Jia told him about the injustice he had suffered. The man did some calculation; 7,200,000 qian was a lot of money and a great temptation. He immediately expressed his wish to marry his daughter to Xu Jia once the latter got the money.

Xu Jia was even more determined to get his money.

Meanwhile, Yin Xi was busy getting ready to welcome Laozi. He knelt before Laozi and expressed his wish to learn Taoism from him.

Xu Jia’s case was taken to court. Laozi asked Xu Jia to lie on the floor facedown with his mouth open. Out came an amulet, and Xu Jia disappeared. What was left on the floor was a skeleton.

Laozi sighed. “When I hired you, I was a low-ranking official and could not afford to pay you. I only gave you the Taixuan amulet and told you your name had been removed from the Book of Life and Death. It was agreed that when we reached the Land of Resting in the Western Regions, I would pay you back what I owed you in gold. Why did you choose to have me up just when our journey was coming to an end?”

Yin Xi could not believe his eyes. He pleaded with Laozi to bring Xu Jia back to life and offered to pay Xu Jia on Laozi’s behalf.

Laozi put the amulet on the skeleton, and Xu Jia came back to life instantly. Xu Jia was pleased to get his pay, and the man who wrote the complaint for him was pleased, too. They both left happily to prepare for the wedding of the man’s daughter to Xu Jia.

The case was closed. It was time for Laozi to go past Hangu Pass to continue his journey to the west. Yin Xi pleaded with his master to leave behind something.

Laozi wrote the “Tao Te Ching,” which consists of around 5,000 Chinese characters. Yin Xi got it printed and circulated it, and then he resigned from his job and left with Laozi.