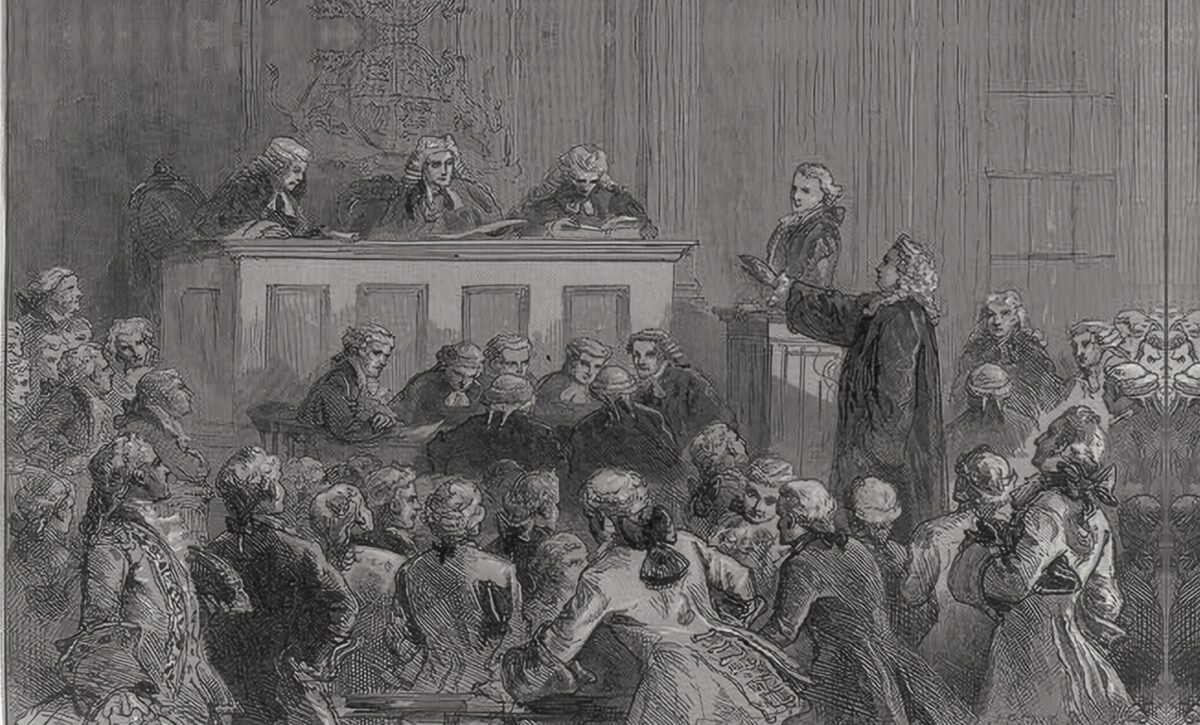 Andrew Hamilton’s defense of the accused printer provided the foundation for the First Amendment of the U.S. Constitution. (Library of Congress)
American Essence

When James Madison of Virginia, later the fourth president of the United States, wrote that “Congress shall make no law … abridging the freedom of speech, or of the press”—God-given rights ultimately enshrined in the First Amendment to the Constitution—there is little doubt that one thing on his mind was the trial of John Peter Zenger half a century earlier.

A German by birth, 13-year-old Zenger immigrated in 1710 to New York, where, after the death of his father, he was indentured for eight years to William Bradford—the city’s lone printer. In 1726, Zenger established a modest publishing house of his own. And it was here that he ran up against the politics of William Cosby, New York’s colonial governor. Indeed, Zenger’s newspaper, The New York Weekly Journal (published from 1733 to 1751), became the chief organ of public dissent against Cosby. The Journal—“Containing the freshest Advices, Foreign, and Domestick,” according to the publication’s masthead—incessantly attacked the governor’s policies, notably his 1733 firing of Lewis Morris, chief justice of the New York Supreme Court.

Chief Justice Morris had dissented in a 1733 court case that had otherwise been decided in favor of Governor Cosby. When that favorable decision was pronounced “before a crowded court,” one 18th-century account relates that it was “received with a general burst of indignation.” When Cosby demanded a written copy of Morris’s dissent, the chief justice complied. But Morris also made sure that his dissent was published for the public to consider because he was afraid that the governor might misrepresent his dissenting opinion.

In a letter published in The New York Weekly Journal alongside his dissent, Morris wrote: “If judges are to be intimidated so as not to dare to give any opinion, but what is pleasing to the Governor, and agreeable to his private views, the people of this province who are very much concerned both with respect to their lives and fortunes in the freedom and independency of those who are to judge them, may possibly not think themselves so secure in either of them as the laws of his Majesty intended they should be.”

Furious, Cosby ousted Morris from his judgeship after 20 years of dedicated service. The governor’s firing of Morris “divided the province into two violent factions,” wrote one contemporary, and Zenger’s Journal was contracted to print the arguments of Morris’s supporters. In the form of satirical advertisements, direct reports, and political essays, Zenger’s newspaper pilloried the governor and his regime for months.

Eventually, Cosby’s patience ran out, and in November 1734, Zenger was arrested. The charge: “printing and publishing several seditious libels” against the governor. The Governor’s Council complained that “the scurrilous papers” had drained “the affections of the people of this Province from his Majesty’s government,” resulting in “sedition and tumults among the people, filling their minds with a contempt of his Majesty’s government.” Zenger’s newspaper had dared to attack the “sacred rights of Majesty” inherent in the governor appointed by the King. Many New Yorkers seethed. Was the governor a king now? Zenger languished in prison for the better part of a year. It didn’t help that, in a clear message to those who might consider defending this opposition printer, the Court disbarred the two attorneys who had volunteered for his defense: William Smith and James Alexander, allies of the fired Morris.

Even so, Zenger kept up publication of The New York Weekly Journal. How? Appearing briefly in court thanks to a writ of habeas corpus, while he could not afford the enormous bail imposed, Zenger was granted permission to carry on communications with the outside world—but only by “speaking thru the hole of the [prison] door” to his wife! Anna Zenger continued to publish the newspaper, even as her husband sat behind bars. Meanwhile, the governor’s supporters burned copies of The Journal in front of New York’s City Hall on Pearl Street.

In late 1735, Zenger was finally brought to trial—and almost immediately things looked bad for the beleaguered printer. “The laws in my opinion are very clear,” thundered James Delancey, the new chief justice of the colony’s Supreme Court—Morris’s replacement and a well-known defender of the powerful. “They cannot be admitted to justify libel,” he said. Zenger’s fate, so it appeared, was sealed.

But Zenger’s new attorney, a prominent Philadelphian named Andrew Hamilton—who suddenly appeared on the first day of the trial to defend the accused printer—refused to be cowed. Addressing the jury directly, Hamilton stated plainly, “The truth is a defense against libel.” Hamilton appealed to the jury’s own competence in judging between truth and error. Whatever the directives of the judges, whatever the insistence from governors and magistrates, the jury could, of its own accord, weigh the accuracy of what Zenger had printed in his Journal.

In essence, Hamilton was calling for jury nullification: when a jury ignores the fact that the prosecution has met the legal requirements for conviction but instead decides, based on principles of moral right, to return a “not guilty” verdict. Wasn’t it right that one should be able to publish the truth, regardless of the embarrassment it might inflict on the ruling authority? The jury—themselves the “judges,” Hamilton insisted, “of the law and the fact”—withdrew to deliberate.

When the jury returned, it presented its verdict. The statements printed in Zenger’s newspaper against the governor had been based on truth, however uncomfortable to some; they had not been invented out of whole cloth. To the astonishment and, for the most part, delight of spectators crowding the courtroom—and against the instructions of the judge—the jury acquitted John Peter Zenger.

The Power of Truth

While no new legal precedent was actually set by this trial, nevertheless, the trial and its verdict changed the popular opinion of what might be claimed as “libel.” Henceforth, charges of libel would be thrown out if a jury determined that the alleged libel was based in fact. Zenger himself helped to promote this new legal principle by publishing, the next year, his own account of the trial—in The New York Weekly Journal, of course. It was widely read in England and throughout Britain’s American colonies, and this episode became an important historical root for the First Amendment. “The old conditions were changed,” wrote one chronicler, “the result of the trial [having] imbued the people with a new spirit; henceforth they were united in the struggle against governmental oppression.” Cosby died that same year, in 1736.

But the roots extended farther. One of Morris’s grandsons, Lewis Morris III, went on to sign the Declaration of Independence, while another, Gouverneur Morris, was a signatory of the 1787 Constitution. Zenger’s attorney, Andrew Hamilton, had donated the land for (and helped design) Philadelphia’s Province House, beginning in 1732. That building was later called Independence Hall, where the federal Constitution was drafted. When the Bill of Rights was subsequently drafted in New York, it was done so at Federal Hall—the very site of the landmark trial of John Peter Zenger. Gouverneur Morris declared during the heady days of the Revolution: “The trial of Zenger in 1735 was the germ of American freedom—the morning star of that liberty which subsequently revolutionized America.”