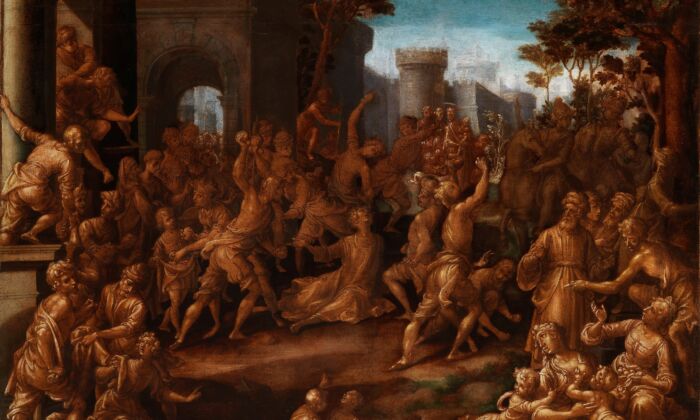 ‘The Stoning of Saint Stephen’ by Renaissance Painter Aurelio Lomi

In this study of “The Stoning of Saint Stephen,” the late-Renaissance painter Aurelio Lomi captured the moment of Stephen’s martyrdom. Surrounded by an angry mob pelting him with stones, Stephen doesn’t shield himself. Instead, he’s in awe of all that is above him. He looks up to heaven, where he sees Christ standing next to God, who is seated on a throne. And Stephen makes a compassionate appeal to God, asking him for forgiveness—not for himself, but for the people persecuting him.

The painting is bustling with action, yet it’s a beautifully rendered, harmonious scene. The main focus is Stephen, those stoning him, and the way that Stephen directs our attention to the heavens through his gaze and body language. In heaven, we can see the divine beings waiting to welcome him. On earth, we can see the turmoil of religious persecution: those who are actively harming Stephen, and then on the right side of the painting, those elders, women, and children watching the fray yet not actively participating. There’s fear and uncertainty on their faces.

Early this year, the National Gallery of Art (NGA) in Washington acquired Lomi’s study. In a press release, the gallery praised the work as an “exquisite example of the artist’s meticulously constructed compositions and figures, as well as his ability to create works suffused with light. It epitomizes the transition from the stylization of late mannerism to the more naturalistic light, movement, and texture of baroque style.”

Lomi was the older brother of another great artist, Orazio Gentileschi (father of painter Artemisia Gentileschi). In the last quarter of the 16th century, Lomi was the preeminent painter in Pisa, Italy, although he also worked in Genoa and Florence.

While living in Genoa, he created his study of St. Stephen, one of the patron saints of that city. The composition of Lomi’s study refers to painter Giulio Romano’s altarpiece in St. Stephen’s Church in Genoa. Romano was a famed pupil of Raphael.

This particular study is similar to the altarpiece that Lomi created for the St. Mary of Peace Church in Genoa, although the composition of the study is more expansive and contains more figures, according to the NGA press release.