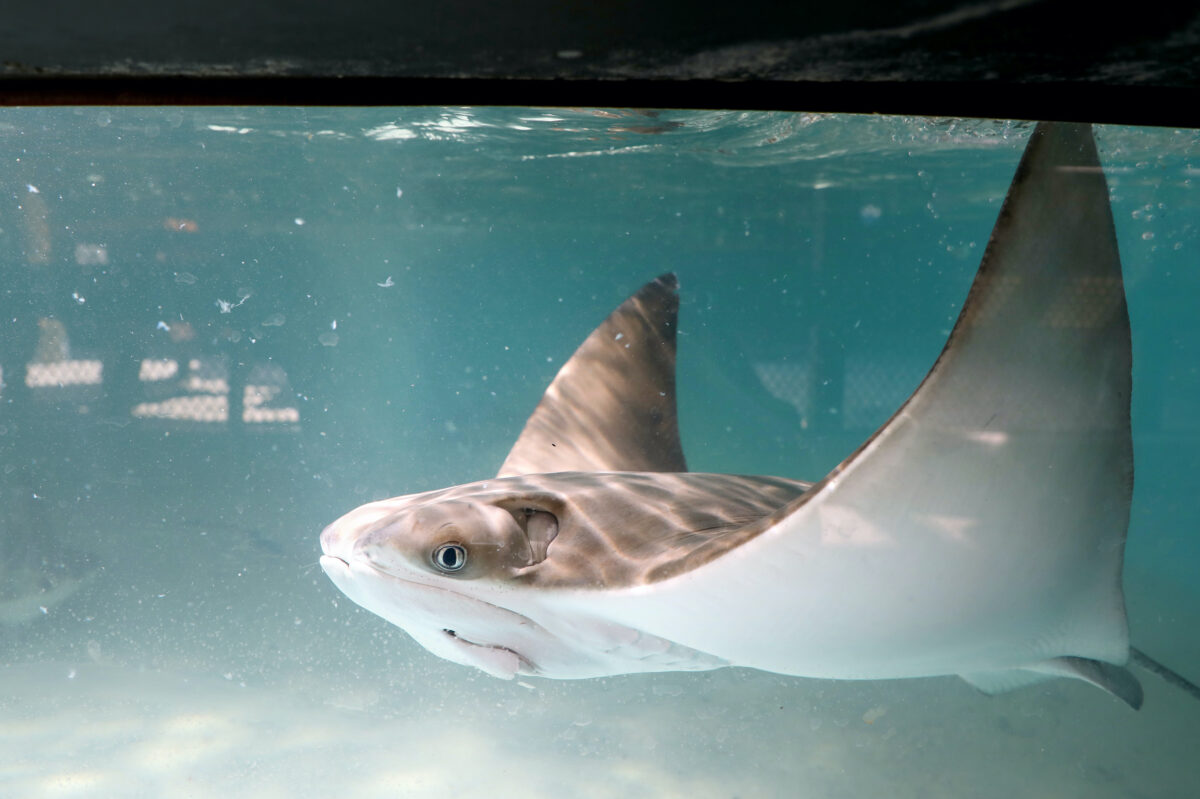 Cownose stingrays like this one are often found in the western Atlantic Ocean. (Douglas R. Clifford/Tampa Bay Times/TNS)
Travel

The Stingray Shuffle Is in Season. Do It to Avoid a Nasty Injury

Tampa—For Kim Bassos-Hull, getting barbed by a stingray hurt more than giving birth to her two children.

“I had kids with no drugs, like I did natural childbirth. And this hurt more than that,” said Bassos-Hull, a senior biologist with the Mote Marine Laboratory & Aquarium in Sarasota.

Bassos-Hull was on the ocean researching spotted eagle rays, with her leg deep in a tank, when a wave rocked her boat. As the tank water sloshed around, a ray bumped into her, injecting its venomous spine and filling her leg with a throbbing pain.

“It was pretty bad for like an hour there, to the point where I almost passed out,” said Bassos-Hull, one of many experts who encourage beachgoers to employ the stingray shuffle during these hot summer months.

It’s a simple maneuver: As you enter the water, shuffle your feet forward and back or side to side in the sand. This creates vibrations that send a warning signal to stingrays.

The spotted eagle rays that Bassos-Hull encountered aren’t as common in the shallow waters along Pinellas County’s beaches, where swimmers are more likely to step on the sand-colored Atlantic or Southern stingrays lying disguised on the ocean floor. But these rays can inflict comparable pain, Bassos-Hull said.

While stingray season runs from spring to early fall, the rays tend to congregate in shallow water during the summer. They can be found at beaches all along the Gulf Coast, said Konrad Ciolko, water safety supervisor for Clearwater Fire and Rescue.

Atlantic and Southern stingrays gravitate to the ocean floor, where they hunt for small invertebrates. As they look for food, they fulfill a crucial role in the marine ecosystem by turning over the sediment, Bassos-Hull said.

Partially buried in the sand, the rays are hard to spot and easily stepped on by unsuspecting beachgoers. They’re not naturally aggressive creatures, but they are jumpy, lashing out with their poisonous spine if startled.

“The stingrays don’t want to sting us,” said Dean Grubbs, an associate director of research at Florida State University’s Coastal and Marine Laboratory near Tallahassee. “It’s when you make the mistake of stomping on one, that’s when issues occur.”

A stingray’s barbed spine — a deterrent against hammerhead sharks and other predators — consists of a series of angled spikes that slide easily into flesh, then rip and tear on the way out.

“They’re angled one way so when they rip it out it’s like pulling a fish hook out,” said Madeira Beach Fire Chief Clint Belk.

The black skin of the spine contains goblet cells that produce a protein-based toxin, the primary culprit behind that throbbing pain associated with a stingray barbs.

Belk said his team responds to a couple calls a week for stingray injuries. For those who get stung, he advises cleaning the wound and immediately dousing the affected area with hot water, which can reduce the pain. After a few hours, the throbbing should subside.

For those who get barbed, Bassos-Hull recommends seeing a doctor. She also recommends applying antibiotics to the injury.