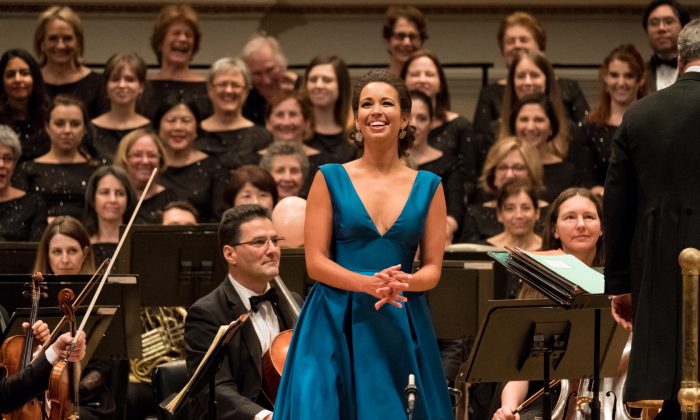 The Stars Come Out to Honor Richard Tucker

NEW YORK—Opera lovers,  if possible, do go out of your way to attend the Richard Tucker Music Foundation Gala. Each year, the Carnegie Hall concert, broadcast live this year over WQXR-FM, is basically an evening of show stoppers.

The Richard Tucker Music Foundation Gala, hosted by the singer’s son, Barry Tucker, is an annual event that showcases award winners as well as prominent opera singers from around the world.

The great American tenor Richard Tucker (1913-1975) was a native New Yorker, who remained a star at the Metropolitan Opera until his untimely death from a heart attack. The non-profit foundation was created in his honor in 1975 to give awards and grants to promising opera singers, a number of whom have become stars.

This year’s winner, Nadine Sierra, certainly radiated star quality. Appearing in three different gowns in the course of the evening, she started with a stunning “Caro nome” from Giuseppe Verdi’s “Rigoletto” in which she not only sang with beauty but acted with feeling, which is difficult to do in a concert setting. She again displayed her singing and acting skills in “Ah, fors’è lui” and “Sempre libera” from “La Traviata.” She was briefly joined by Samoan-born New Zealander tenor Pene Pati, making his New York debut. Finally, Sierra returned for Leonard Bernstein’s and Stephen Sondheim’s “Tonight” from “West Side Story,” a duet with tenor Vittorio Grigolo.

For his solo aria, Grigolo sang a full-toned “Vesti la Giubba” from Ruggero Leoncavallo’s “I Pagliacci.” It was marred by his over-the-top antic of appearing in greasepaint.

By contrast, baritone Anthony Clark Evans was a model of good taste for the prologue to “I Pagliacci.” He is deserving of the Richard Tucker Career Grant he was awarded this year.

Pene Pati sang “La Donna e mobile” from “Rigoletto” with a clarion tone, making it clear why he has created such a sensation lately at the San Francisco Opera. Hopefully, the Metropolitan Opera will sign him soon.

Soprano Ailyn Pérez (who won the Tucker Award in 2012 and recently triumphed at the Met in “Thais”) gave the audience a rare treat: “Ebben? Ne andrò lontana” from Alfredo Catalani’s “La Wally,” a famous aria from an opera that is never performed.  She followed this with an impassioned “Un bel di” from Giacomo Puccini’s “Madama Butterfly.” The lovely singer also appeared in different outfits for each number.

The surprise of the evening was provided by veteran mezzo Stephanie Blythe (winner of the Tucker Award in 1999). She first sang a Handel aria from “Giulio Cesare,” proving that she is still a force of nature. Then, she performed an aria from an opera that, to my knowledge, she has never sung on stage: the “Habanera” from Georges Bizet’s “Carmen.” Blythe sounded terrific but even managed to evoke laughter with her comic flirtation with the conductor. At the end, she received a standing ovation.

For the finale, a number of the soloists returned to join with the orchestra and chorus for the joyful concluding scene of Verdi’s “Falstaff.”

Under conductor Nicola Luisotti, the members of the Metropolitan Opera Orchestra and the New York Choral Society, provided graceful support.