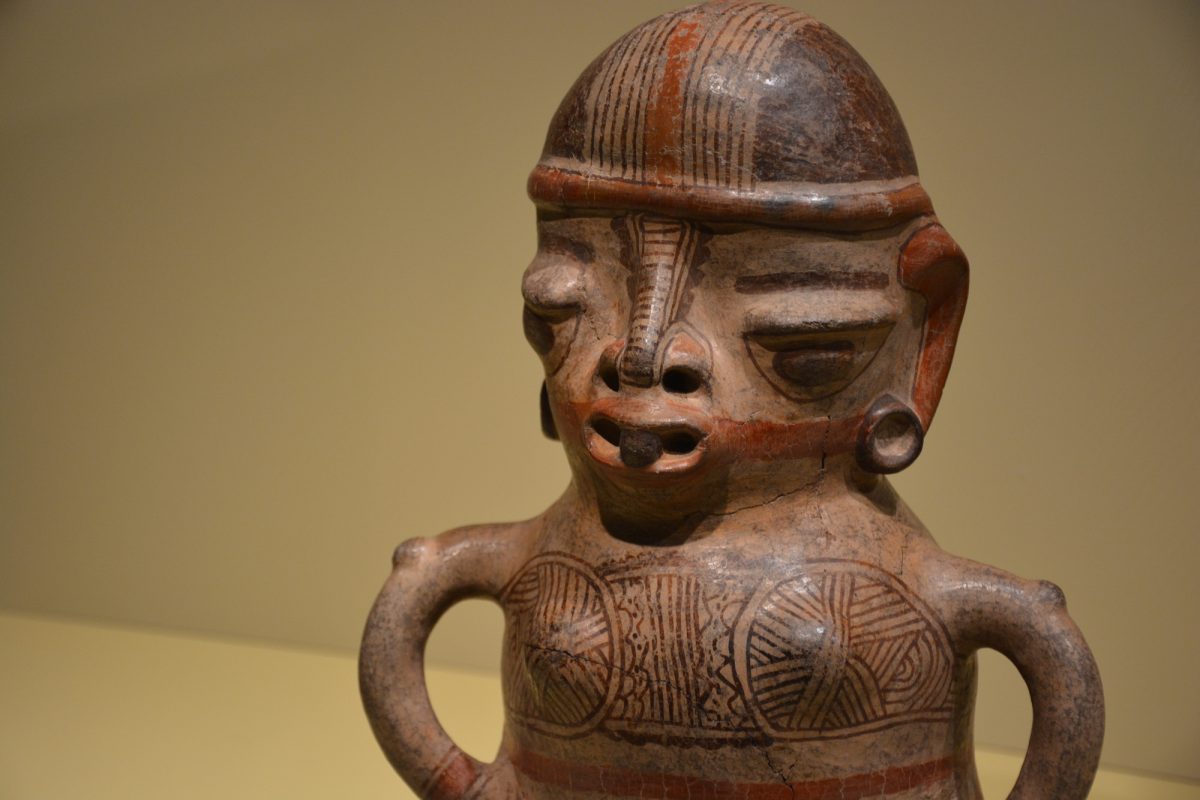 The Smithsonian Grapples With a Modern Conundrum: How to Engage New Audiences

NEW YORK—The National Museum of the American Indian, part of the Smithsonian Institution, has launched its first major bilingual exhibit in New York, one that will test the institution’s will to engage with wider audiences.

An ambitious project, Cerámica de los Ancestros: Central America’s Past Revealed contains over 130 exquisite ceramics and other artifacts that illustrate life, power, and ritual in the indigenous societies of what today are Belize, Costa Rica, El Salvador, Guatemala, Honduras, Nicaragua, and Panama.

The exhibit opened its doors this month at The National Museum of the American Indian (NMAI) downtown. The exhibition was shown in NMAI in its Washington, D.C., location for two years before each piece was lovingly packed up this February and shipped north for the New York City showing.

Exhibit organizers have their sights set on correcting a broad cultural misperception of Central America.

Thanks to middle school teachers everywhere, the big, sexy empires of the Mayans, Aztecs, and Incans loom large in our imaginations, dripping with silver, gold, and the blood of legendary human sacrifices. But sandwiched between these famed empires of Mexico and South America are a multitude of tribes residing in Central America.

Each of these societies boasted rich spoken and visual languages, social and political structures, and areas of knowledge that we are only starting to appreciate now.

Ann McMullen, Ph.D., of the Smithsonian Institute, is curator of the exhibit.

“People have the perception that the area of Central America is just one big jungle,” McMullen said. Cerámica de los Ancestros is a peek into an otherwise unknown world where the distinctiveness of the different groups can be better understood.

A footed vessel in the shape of a stingray from the Greater Coclé region of Panama. A whistle in the form of a seated woman from the Mayan civilization. Stylized owl-, lizard-, and monkey-shaped vessels from animal-rich Costa Rica.

The pieces shown, dating back to A.D. 500–1500, were selected from more than 12,000 Central American ceramics from the Smithsonian’s collection.

Central American ceramics—like many ancient artifacts—first came into Western museums in a not-so-savory way. Many wealthy industrialists from abroad excavated archaeological sites, taking with them precious stones, ceramics, and jewelry for sale on the art market.

Most of them ended up donating or selling the remainder of their collections to museums as a way to clear their names while boosting their reputations. The Smithsonian’s collection contains many pieces of such provenance. Things have changed since the 1970s, when UNESCO began setting up conventions to protect cultural patrimony. Now national governments tightly hold the reins of antique exports.

Not coincidentally, it was around the same time that scholars started to study Central American culture on its own terms. Today, the newest generation of Central American archaeology students are spearheading inquiries into a past that their parents and grandparents might not have had the luxury of knowing due to war, revolution, and lack of opportunity.

Eduardo Díaz is director of the Smithsonian Latino Center. The center’s job is to make sure that the Smithsonian museums’ programming reflects the Latino experience and history, and engages Latinos.

“We (the Smithsonian) really had not done a lot for that community given this huge collection,” Díaz said. “And a lot of Central Americans are not that familiar with their ancestral legacy due to faulty education in their home country, and then when they migrated here, there’s nothing for them either.”

Fewer Latinos are coming into the United States as immigrants but more are being born here, according to a Pew Research Center analysis of U.S. Census Bureau data. That means, in addition to being American-educated, this new generation will have fewer direct ties to their parents’ culture of origin.

To Be Engaging, You Must Engage

“There’s really not a lot known in terms of their geo-demographic profile,” Díaz said. “We also don’t know enough about the psychographic behavior that drives their participation in the cultural realm. A lot of the Latinos here are fairly recent immigrants. They’re working class; they’re not your traditional museum-going crowd.”

What Díaz does know is that it’s important among Latinos to engage in family activities. To this end, NMAI scheduled an Annual Children’s Festival on May 2, in conjunction with the exhibit. There’s also a coloring book to get the kids excited about Central American motifs they might see throughout the exhibit.

A 2010 Center for the Future of Museums report suggests that this tactic goes partway in the right direction.

Not elaborated on but acknowledged in the report is social media. In its singular mention of social media, the report noted that young people don’t see social media as nice to have, but rather as an expected part of a cultural experience. It recognizes that museums are only starting to utilize social media for networking and marketing.

Social media events like MuseumWeek are starting to push the hierarchical structures in museums to be more open online.

This past March, nearly 3,000 museums in 77 countries participated in MuseumWeek, allowing visitors to share photos of their favorite art pieces and pictures of themselves posing with sculptures. During the week-long event, museum-goers generated 180,105 tweets—many of which were written in languages other than English.

The annual event has started to open the eyes of traditional museum administrators, said Benjamin Benita during a Skype call from Paris.

Benita is a MuseumWeek international coordinator. After this year’s event, he noticed that a museum director he works with—who had never shown interest in Twitter before—was browsing museum visitors’ comments on the platform.

So how is the NMAI exhibit doing? Did Latinos flock to see it during the two years it was open in D.C., as was hoped? The answer is that we don’t know. The Smithsonian doesn’t track visitor counts by exhibit, only by museum, according to a press person.

But does it matter?

In the book “Identity and the Museum Visitor Experience,” author John H. Falk questions the ultimate usefulness of using demographic information to assess the quality of museum engagement.

“Variables like age, gender, race/ethnicity, and generation do tell something about individuals but they tell virtually nothing about how these individuals might relate to museums,” he writes. “For a personal context variable to be useful, it needs to have some relationship to the other contexts, such as the subject matter of a museum and the design of its exhibitions.”

In 2012, The Associated Press reported that the Hispanic Society of America, despite its impressive collection of Spanish art, was barely known among New Yorkers.

“Tourists from Spanish-speaking countries ‘make a beeline to come up there’ said Michael Mowatt-Wynn, the Society’s community outreach advocate,” reporter Ula Ilnytzky wrote. “But New Yorkers and other U.S. tourists are far less likely to be aware of it. School groups make up half of the Hispanic Society’s attendance.”

Three years later, the Hispanic Society of America is still struggling. A former professor of one Epoch Times reporter visited earlier this year and saw hardly another visitor, Latino or otherwise, despite the museum’s subject matter and location in Washington Heights, a predominantly Latino neighborhood.

So as far as engagement goes, maybe it means something different than getting a particular type of visitor through the door—maybe it’s simply a matter of whether museums are as interested in people as they are in collecting and research.