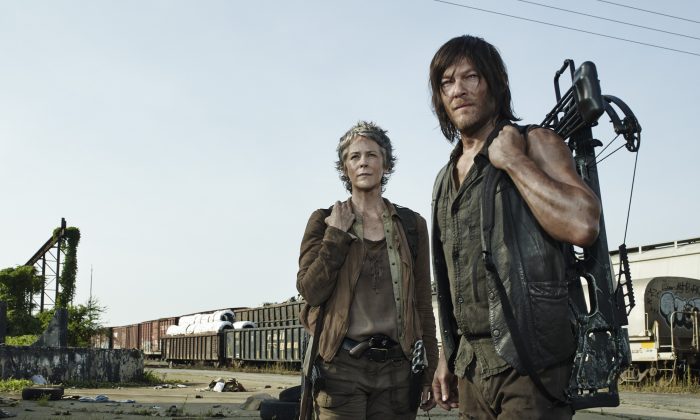 A scene from "The Walking Dead," one of the most popular dystopian dramas on Netflix today. (AMC)
Arts & Culture

Re-thinking Our Addiction to Dystopian Shows

If Netflix’s most-watched shows are any indication of the future of humanity, we could be in trouble. From the zombie apocalypse to totalitarian nightmares, Netflix is rife with dystopian entertainment—and we just can’t seem to get enough.

Television is the traditional means of escape for the modern working family and has been for more than 50 years. A glance at the most popular shows from each generation offers insight into Western society at the time. Back in the 1970s, “Dallas” and “The Love Boat” were the worlds we escaped to. Today, we are more inclined to relish the distorted world of “The Walking Dead.”

Gone is the ultimately Utopian vision of “The Neverending Story” of yesteryear. In their place, we have zombies, totalitarian rulers, and “big brother” societies.

Dark visions of the future and themes that speak to our greatest fears seem to offer the most attraction. The problem is, the things we fear have become so ubiquitous that they no longer instill the same dread that they once did, thus the boundaries are pushed ever further and our projected visions of the future become ever darker and more perverse.

Our obsession with apocalyptic worlds is not new, but it is on the rise. The ’80s was the era of the romcom, the ’90s the sitcom, and the 2010s have put us in the era of dystopia. There is something unsettling about this pervasive fascination with apocalyptic futures, a certain ominous foreboding that comes from preferring to look at the world through a dark and distorted lens rather than an idyllic one.

This is not to diminish some of the great dystopian works or to imply that they are a modern phenomenon. They serve as stern and potent reminders of humanity’s capability for self-destruction and of the price we pay for losing our moral compass as a species. They are necessary and powerful tools, but their growing pervasiveness is troubling.

It’s not entirely doom and gloom, though, and one of the characteristics of the genre, at least in the teenage dystopian fantasy lineage, is that redemption is possible through self-sacrifice and courage. Katniss Everdeen of “Hunger Games” became one of the great heroines of this generation. In this case, dystopia is only temporary and humanity finds its bearings again.

Other shows don’t offer the same outcome and seem to subsist only on fear and doom without offering any hope or resolution. Instead of assuaging our fears, these shows propagate them.

Feeding our imagination with a positive vision of the future might be a step in making sure we end up with one.

Sales of George Orwell’s “1984” increased during the recent U.S. presidential election, a trend also seen in 2013 following the NSA (National Security Agency) leaks. The novel seems to have gained new relevance, as has Aldous Huxley’s “Brave New World.” These two novels, arguably the first great modern dystopian tales, are worth unpacking. Both present an apocalyptic, totalitarian vision of the future (but with some major differences). Both are chilling.

In “1984,” books are banned, information is tightly controlled, and people are managed with force and pain. In “Brave New World,” people are not interested in books. Information overload has generated mass passivity—the truth has been drowned in a sea of irrelevant information.

Looking at our world today, it would appear that we are closer to living in Huxley’s world than Orwell’s.

We don’t have to look far to see how bad things can get when the wrong ideas are taken to the extreme. The destruction and killing that went on in Josef Stalin’s Russia or Mao Zedong’s China is enough to shatter any idyllic visions of extreme socialism or totalitarianism we might entertain.

Notwithstanding a lack of privacy, we still live in a relatively free society where we have the ability to choose our own path in life.

Feeding our imagination with a positive vision of the future might be a step in making sure we end up with one. Dystopian fiction has its place, but that place would be better reserved for the rare occasions where we want to be scared into making sure our species comes out ahead in the end.

Albert Einstein perhaps said it best: “The most important decision we make is whether we believe we live in a friendly or hostile universe.”