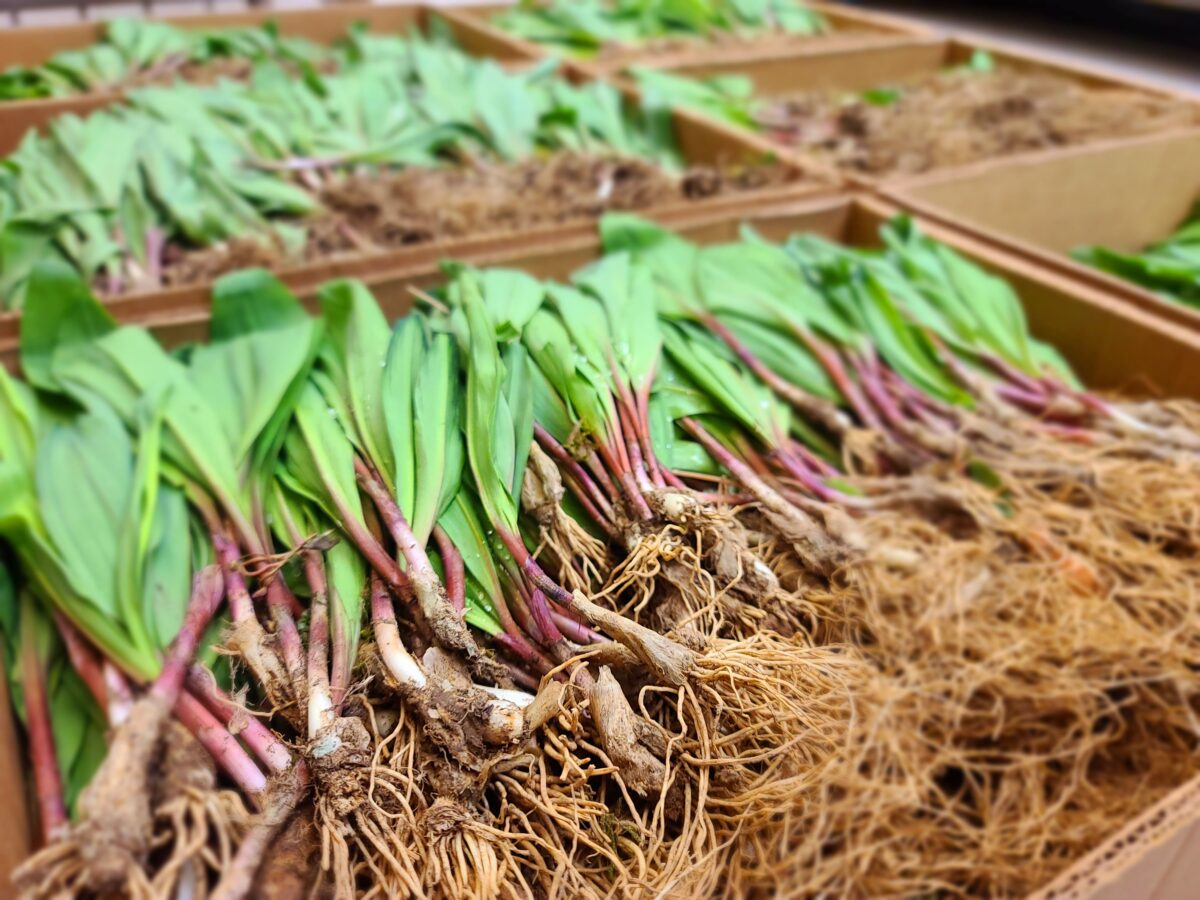 The wild ramp has a flavor akin to a cross between onion and garlic. (Wendy Smith)
American Essence

This spring seasonal favorite is foraged and beloved throughout West Virginia
BY Jill Dutton TIMEMay 16, 2022 PRINT

One way to immerse yourself in local culture is by discovering the region’s seasonal delights. Through food and heritage, we gain a closer look at the area, its flavors, and its people. In West Virginia, the wild ramp is particularly celebrated.

While foraging was a necessity in times past, many now enjoy the art of foraging and hunting for seasonal foods to use in cooking. With a limited availability, many preserve the wild ramps so they can be eaten year-round. Others consume the delectables while they’re in season. Part of the allure may be its seasonality, but there’s also the sport of foraging, and the ramp’s distinctive, powerful flavor.

The North American species, found in mountainous areas from Canada to the eastern United States, grows for a brief period in early spring. Ramps have a taste similar to, but much stronger than, a cross between onion and garlic.

Wild ramps are a delicacy for a few reasons. With such a short growing season, the ramp is in demand when it grows in the spring; many in West Virginia drive down roads with a spotter who can identify the first growth of its distinctive green leaves. As the foraged version has a deeper flavor than those cultivated commercially, the wild version is the preferred choice for most. After a long winter, the first shoots of the wild ramp were an opportunity for early settlers to enjoy fresh vegetables again. Throughout history, people living in the Appalachians considered it a spring tonic, seeking it out for medicinal purposes. Since the wild ramp is an indicator of spring in Appalachia, many festivals celebrate its arrival.

Leslie Smithson, communications director at the tourism bureau of West Virginia’s capital city, Charleston, worked for the state’s forestry service previously and has eaten ramps all of her life. “My dad was an outdoorsman, so when he would come home, a lot of times he would bring what he called a ‘mess’ of wild ramps. They’re very strong and very fragrant,” she said, adding that “the old timers, if you will, … would eat ramps when they came up, and they thought it would ward off illness. Many people still believe that.”

Where to Find Wild Ramps

There are two varieties of wild ramps that grow in the eastern parts of North America: Allium tricoccum var. tricoccum, with its red stems, and the narrower-leaved Allium tricoccum var. burdickii, known as white ramps. The latter has smaller leaves and bulbs and tends to have a milder flavor profile. They begin emerging in early April, with the main harvest occurring through mid-May.

Chefs also take to the hills to find this seasonal delight. Hannah Radford, who is the executive chef and director of food and beverage at the Adventures on the Gorge resort in Lansing, West Virginia, explained, “They tend to grow on hillsides under high foliage trees. This might be the only time of the year a chef will take the time to get out in the woods to hike, and it’s not just for the beautiful scenery, but to locate the spring’s most prized ingredient for unique dishes. With the unique flavor that is a perfected blend of scallion and garlic, these wild leeks add a bold intensity to almost any dish—and we, as chefs, will try incorporating them into anything to prove we have the most eccentric recipe and plating concepts.”

To forage sustainably, only take what you need, and leave the roots intact when harvesting. Radford said, “To harvest, you must wait until the leaves are at least 4 inches tall, in order to ensure you do not damage the future of the next year’s harvest. When harvesting, you do not harvest over 50 percent of the plot to again ensure that they will produce again for the next year. When plucking each ramp from the earth, we gently trench them up by hand or with a trowel. Upon releasing them from the soil, I always try to cut the roots about 2 inches below the bulb to ensure some roots remain in the ground for re-germination the following year.”

For those who don’t forage on their own, wild ramps can be found at farmers markets, specialty grocers, roadside stands throughout West Virginia, and festivals, as well as incorporated into seasonal menus at restaurants. Although some farmers do attempt to cultivate ramps, it’s not a common practice, so it’s easiest to forage or find foragers who sell their harvest.

One place to purchase wild ramps is at The Purple Onion Fruit & Veggie Co. market stand at the Capitol Market in Charleston. Allan Hathaway, the owner, said his ramps are picked fresh each morning and driven to his store within one to two hours after harvest. Ramp lovers in West Virginia can also find this treasure in other forms: infused into salt from J.Q. Dickinson Salt-Works, dried and then mixed into dips and salad blends, pickled by local vendors, and canned as a jelly from In A Jam. To preserve ramps for later, they can also be made into a pesto or compound butter.

Hathaway added, “Don’t be afraid to try it! When prepared properly, you will know why ramps are so popular! We ship ramps to restaurants as far away as New York City, Washington, D.C., and Atlanta, Georgia.”

How to Eat Wild Ramps

Similar to scallions, the entire ramp—from the leaves to the bulb—is edible. Many cook ramps with potatoes or scrambled eggs.

Jerry Stalnaker is a retired army sergeant who now lives in Greensboro, North Carolina, but grew up in the Appalachian mountains of West Virginia. “We used to go camping, preferably near a stream, and forage for ramps. We would camp along the river, go into the mountains for the ramps, then bring them back down. After fishing, we’d cook the trout over the fire along with a skillet of fried ramps and potatoes.”

Stalnaker said his family would freeze, can, or dehydrate any surplus. Because ramps and potatoes pair so well, he said they would often dehydrate the ramps, grind them into a powder, then store it in a shaker jar to season foods, especially fried potatoes.

The ramps are notorious for their pungent smell that lingers, and Stalnaker added that upon returning home from camping trips, someone in the family was sure to ask, “Who ate ramps?” Everyone would know upon the culprit walking through the door.

At Adventures on the Gorge, Radford said she uses ramps in anything that pairs nicely with garlic. Because spring is also when the renowned morel mushrooms grow, she likes to pair the two together in dishes such as a morel mushroom risotto that’s topped with wilted spinach and a ramp confit, venison roulade, and a red wine reduction (recipe to follow).

Another popular restaurant version is the ramp burger at Ridge View BBQ in Institute, West Virginia. Created by owners Jim and Wendy Smith, the burger is topped with a flavorful bacon, ramp, and pimento cheese mixture and has been featured on television and in magazines. Locals love it as well. Wendy Smith said, “We began selling our ramp burger a few years ago, and it took off like wildfire. Our ramps are donated, and we donate one dollar from each burger to a worthy charity that is picked by our ramp vendor.”

Those who love wild ramps and their distinctive flavor never miss a chance to forage when they’re in season. Linda Carnell, an assistant state forester in West Virginia, likes to drive on back mountain roads in search of the wild greens with her husband. She’ll often be spotted with binoculars. “My husband and I always laugh because I hunt them while he’s driving. I’m like, ‘Oh my gosh, look, there’s one,’ and then we’ll find a motherload, just like a big patch of them. It’s kind of feast or famine. Sometimes you find a whole big bunch and then next year you don’t see anything.”

She’ll know spring has arrived when she spots the ramps. “Turkey season is coming in and fishing season is really underway. … The streams are running good. I mean, it’s spring.”

Ramps like rich, moist, well-drained soils. They like to grow in hardwood stands and at higher elevations. You have to know where they are, and once you find out where a patch is, most people go back to the same place year after year.

What to look for:

Look for coltsfoot and bloodroot wildflowers. Usually, ramps won’t emerge until you know they’re getting some warmer days. It’s like the first thing out from the winter and heading into early spring.

Be aware of a strong odor. Once you smell it, you know you’ll encounter a patch of them.

Look for bright green leaves. It’s a very vibrant color that usually stands out from the rest of the greenery. They can grow up to a foot tall, with two leaves coming out from the bulb.