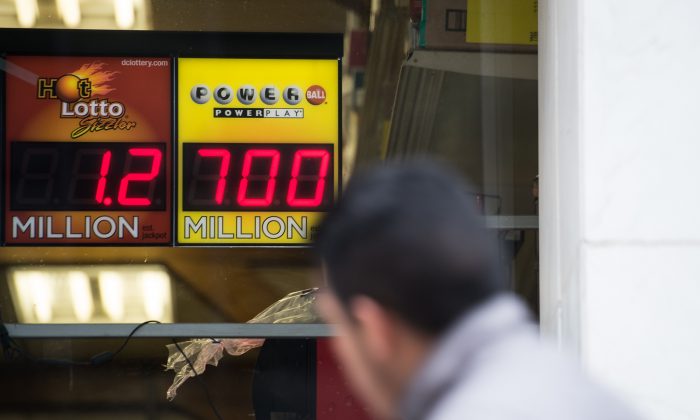 A sign in the window of a liquor store shows the Powerball lottery jackpot at $700 million in Washington, D.C., on Jan. 7, 2016. (Nicholas Kamm/AFP/Getty Images)
HK Life

Stories about the tragedies that have befallen lottery winners are so common that it’s almost a cottage industry in journalism. As the Powerball jackpot approaches a record-breaking $1.3 billion, it’s a good time to review the different ways a sudden boost in wealth can ruin a life.

In 2002, Jack Whittaker of West Virginia won $315 million in the Powerball, according to ABC. After reports spread to his hometown, he became the victim of perpetual harassment from friends, colleagues, and even strangers who wanted a piece of the winning; he was followed around and disturbed at baseball games or on visits to the bar, where he had his drink drugged one time so that the assailant could steal his briefcase.

Whittaker not only broke off with his friends, he attributes the death of his grand-daughter to his winning of the lottery. Whittaker said that she had been targeted by drug-dealers who knew that Whittaker had money, and one day disappeared in late 2004, her body found dumped behind a van two weeks later.

Winning the lottery can also drive a wedge between couples. In 1996, Denise Rossi won $1.3 million in the California lottery, according to the LA Times. She hid the information and divorced her husband 11 days later, and was later sued by her ex-husband for violating the state’s asset disclosure laws, which ended with a judge forcing Rossi to hand over all of her winnings to her ex-husband.

Less dramatically, lottery winners often fall prey to the more banal vice of profligacy. Evelyn Basehore won $5.4 million on two lottery tickets in the 1980s. In 2012, she told the NY Post that she had gambled the winnings away, and was working two jobs and living in a trailer park.

Basehore’s fate is a common one. The National Endowment for Financial Education estimates that 70 percent of Americans who experience a sudden spike in wealth lose it within a few years, reports NBC News. A 2011 MIT study found that that those who had won “large” amounts in the lottery ($50,000 to $150,000) were just as likely to go bankrupt after a 5-year span as those who had won a “small” amount (less than $10,000).