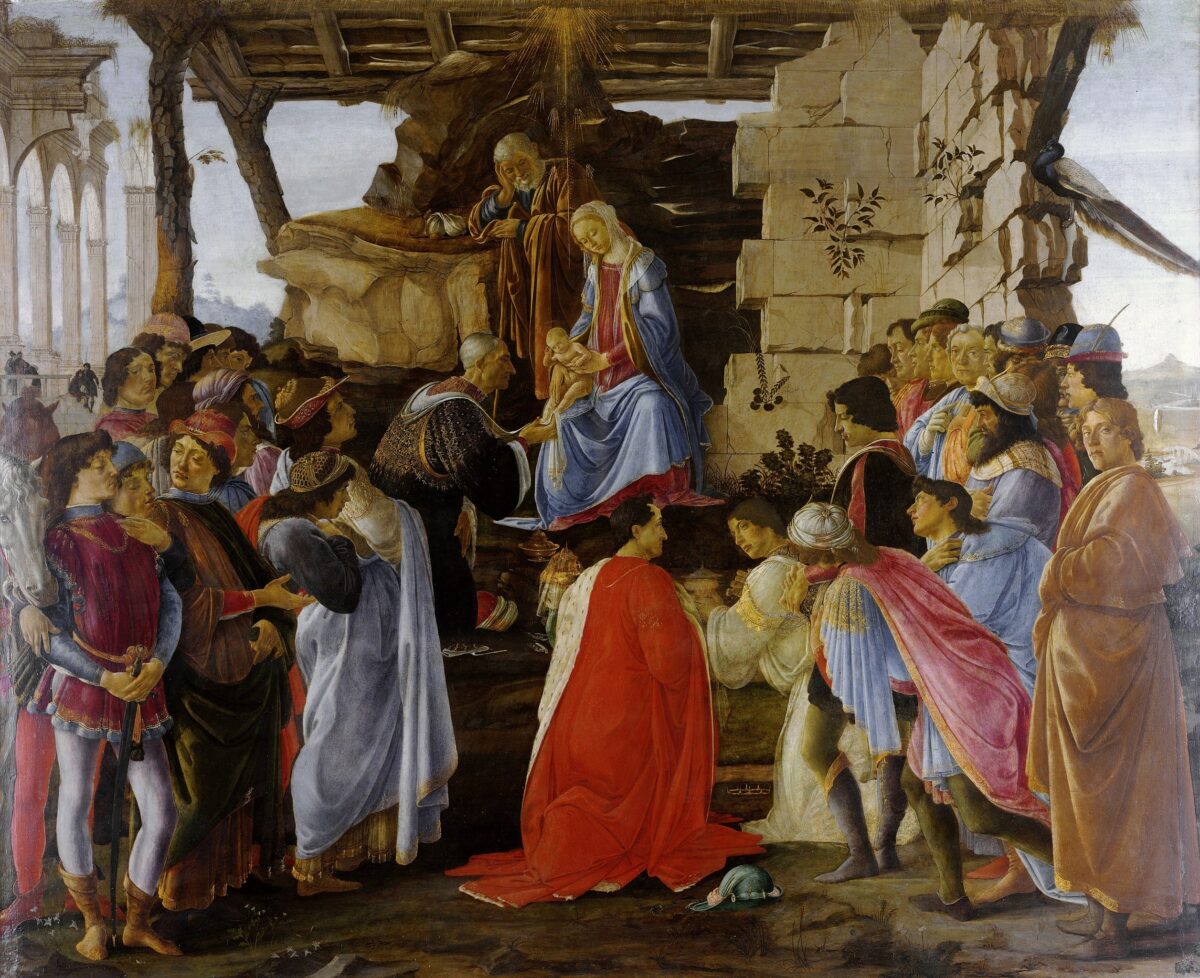 The Sacred Nature of Family

Art exploration for the young and young at heart
BY Andrea Nutt Falce TIMEDecember 25, 2022 PRINT

Before the printing press and widespread literacy, signs and symbols were used as effective tools for teaching through art. Average viewers could recognize pictorial meaning even in the use of color. For example, red was a reference to humanity or the passions, purple indicated majesty, and white was an allusion to purity. Traditional symbols such as lilies may remain familiar to modern eyes, but many no longer understand how to interpret their significance. The spear-like petals of a white lily, often visible beside an image of the Madonna, referenced her purity and future suffering.

The foundations of Christian faith date back thousands of years, even before the coming of Christ. Throughout Christian art, Mary is seen as the bearer of the ark of the covenant, because she concealed Jesus in her womb. When the ark of the covenant was to be moved by the Levites (Numbers 4:6) it was to be draped in a cloth of blue and veiled even from the eyes of the priests. Before and during the Renaissance, artists who understood the faith often depicted Mary in blue. Blue pigments were ground from a semi-precious stone called lapis lazuli, suited to a queen. Blue is the hue of the heavens and represents hope. Thousands of years of faith, suffering, learning and growing towards God form the bedrock of Christian faith, art and tradition.

December is a month of special focus on the Holy Family. Nativity Scenes have been painted since the time of Christ, gaining in richness and beauty especially during the Renaissance. Scenes of the birth of Christ and the coming of the Magi magnificently illustrate Christianity ideology.

In Sandro Botticelli’s “Adoration of the Magi,” the coming of Christ is gloriously represented. First and foremost, Jesus Christ is situated at the center of the lively composition. While Botticelli’s painting, dating from 1476, memorializes the faces of many prominent citizens of Florence five centuries ago—including his own and the Medicis’, even the wealthy commissioner sits well below the solid rock upon which Mary and Jesus are permanently perched. The scene takes place not simply in a stable, as the Bible records, but in a stable surrounded by deteriorating brick and ruins. There is a meaning to this imagery far more than decorative. The coming of Christ, even as a seemingly helpless infant, signifies the destruction of worldly empires. The painting explains God’s coming to earth, permanently altering time and history. Earthly leaders no longer wield the highest authority, for their ideas are perishable, and their power rises and falls like all human structures.

Botticelli paints strands of golden light streaming from above to highlight the sacred nature of the infant. Some of the crowd adore him, others consider, some turn away, but the artist looks out with a meaningful glance towards us. His eyes seem to question each viewer, “Where do you stand?”

Though not a Florentine, Flemish painter Hugo van der Goes, includes luminously similar imagery in his “Adoration of the King,” painted in 1470. Throughout Christendom, the meaning of key symbols was so well recognized as to be nearly codified. In Van Der Goes’s “Adoration,” finely robed kings bring expensive gifts to the humble child who is not merely surrounded by a stable, but again, the ruins of the old world of paganism. Behind Mary a thriving kingdom is visible, an allusion to both the present Christian world and the heavenly kingdom to come.

A similar piece, also painted by Hugo van der Goes, titled, “The Portinari Triptych,” focuses on the Nativity scene during the arrival of the poor shepherds.

Today we are less inclined to recognize the signs, symbols and deliberate meaning in art than our ancestors were. Though we are increasingly greedy consumers of artistic imagery, particularly on TV and via any number of screens, the quality has gone down. At times, modern man appears to consume more, understand less, and accept indolently.

During a time when technology ushers in new fads and ideas every few seconds, long-honored ideologies seem oppositional to vapid trends as the faith of ordinary Americans gets challenged. Christian principles and the sacred preeminence of family appear to be under attack from school boards to classrooms, between cyberspace and government space. The meaning of faith and tradition are increasingly essential to appreciate.

Too many of us peer into our devices and forget to question the meaning of what we’re seeing and slowly accepting. Today, major entertainment networks are moving with a deliberate haste to create art and entertainment that alters time-tested traditions and family values. Whether to accept or reject the agendas of the entertainment industry, government, and other worldly pressures is a question for every man.

Once again this Christmas we are reminded to reflect upon the image of the Nativity. God came to dwell with man. He was born into a holy family, lived a life of love, cured the blind, healed the lame, and conquered sin and death. The world hated him because it preferred darkness. That story is written in blood. Authentic faith will not be forfeited for the sake of what’s vapid or false.

Andrea Nutt Falce
Andrea Nutt Falce is a happy wife and mother of four. She is also a Florentine-trained classical realist artist and author of the children’s book, “It’s a Jungle Out There.” Her work can be found at AndreaNutt.com
SHARE
Friends Read FreeCopyFacebookTweet
SHARE
Friends Read FreeCopyFacebookTweet
You May Also Like