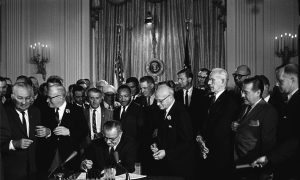 Are you racist? Most of us don’t feel like we are. But what if there was a system of racism that we’re not aware of, a borderless system of oppression that we all unconsciously adhere to.

It’s what New York Times best-selling author Tariq Nasheed claims in his Hidden Colors series of documentaries, which, despite topping Amazon’s charts, are pretty much unknown outside of the black community.

Nasheed argues in the films that the history of black people has been deliberately suppressed by what he calls “white supremacy,” and says that black people must themselves learn a code of conduct in order to free themselves from it.

He says that white supremacy is a global system that even has “rules,” which he will outline when he lectures in London for the first time on March 15th, 2015.

Nasheed spoke to the Epoch Times from his home in Los Angeles, which is also the location of his weekly radio show.

Epoch Times: You often talk about “white supremacy,” which is a controversial sounding term—but that’s not how you intend it, right? What’s your definition of white supremacy?

Epoch Times: And many white people themselves aren’t aware of this are they?

Mr. Nasheed: Absolutely. There are some people in the dominant white society who don’t understand how racism works. They think that a white supremacist is a Klan member or a skinhead. They don’t understand that white supremacy is basically anyone who believes they should be in a superior position over people who are classified as non-white. It can be very minute things that make a big difference. That’s how white supremacy works: it’s a system, not people saying “I hate you, I hate you,” it’s a collective system that all people who practice it participate in.

Epoch Times: You believe there are many parallels between the U.K. and the U.S. in terms of race relations. How so?

Mr. Nasheed: Not only is there a parallel between the U.K. and the U.S. but when you go to other remote places around the world where white supremacy is dominant you see the same parallels. I was just in a very remote Pacific island called NU.K.u Hiva and they still have a system of white supremacy where the people of “melanated” descent are being dominated.

Epoch Times: Your upcoming lecture in London is on the international rules of racism. What are these rules?

Mr. Nasheed: It’s basically a code of conduct that people who practice white supremacy abide by. That’s how white supremacy is able to maintain itself. There is no “white leader” and this is why it’s very difficult for people who are dominated by white supremacy to combat it because they don’t understand that there is a code and there are rules that are unspoken and learned through osmosis. When I talk about the rules of racism I talk about a code that people of melanated descent can abide by to empower themselves.

Epoch Times: Has this system been consciously set up?

Mr. Nasheed: It was definitely consciously set up and the thing is, when it was being set up they were very explicit as to why it was being set up, especially in the U.S. and the U.K. After a few generations when it becomes institutionalized it doesn’t have to be verbally announced as much and people can blame the victims of white supremacy and say they’re poor because they didn’t work hard enough, while ignoring all the rules and regulations that you set up to create that poverty.

Epoch Times: Do you think black people are aware of this?

Mr. Nasheed: Of course. There are some black people who pretend not to be aware and say, “We just need to pull ourselves up, we need to stop blaming people, what about black-on-black crime?” We have a lot of black people who say that, but these are people who are basically trustees in a prison. Because white supremacy is a global prison and in it you have people who try to make power plays for positions of resources. So black people learn early on that if I bow my head and say that I’m going to serve religion I can keep certain privileges. If I can throw other black people under the bus I can keep certain privileges, I can get on television, I can get a record deal. Black people are very conscious of what you have to do in order to get resources, because the system of racism is all about getting resources away from black people and people of color.

Epoch Times: Is it hard for white people to hear some of the things you say?

Mr. Nasheed: When I talk to white audiences what’s interesting is when you talk about it in a calm way, it makes people in the dominant society sad because they have to look at themselves. When we talk about race the dominant white supremacists like to see black people ranting and raving, because then they can say, “Look at that radical, we need to circle our wagons.” It helps them justify maintaining white supremacy because that radical guy is going to get them if they allow him into their circle. But when you talk about racism and white supremacy in a very calm manner it shakes people up because now they can’t say that you’re being this crazed militant.

Epoch Times: Could what you talk about be classed in some people’s minds as “conspiracy theories” and therefore “tainted”?

Mr. Nasheed: Not at all because what I talk about are documented facts. It’s a documented fact that there have been laws against people of color, and there are laws that have benefited people who are classified as white. Black people were brought over and enslaved, deprived of laws, resources, and land, so these are not conspiracy theories.

Epoch Times: Isn’t it the case that being in Western countries we all sit at the top of the pile regardless of race?

Mr. Nasheed: Wherever I go around the world you have systematic white supremacy—the whites on top, people of colour on the bottom, and the darker you are the further towards the bottom. Then you have some people who say, “I’m white, I’m struggling, I’m in the same boat as you guys.” That’s a con game. These are what we call “white sacrifices,” because in the system of white supremacy it’s a business. In any business there are going to be sacrifices, some collateral damage. For every homeless or drugged out white person, you have a thousand well-to-do white people benefiting on white privilege. Over here in the States, for example, some of the poorest white people are the biggest white supremacists you’re ever going to meet, because white supremacy is all they have left.

Epoch Times: What’s the end game of all this?

Mr. Nasheed: There is no end game—it’s to maintain this religion where you dominate people who are classified as black. That’s the end game, to keep it going as long as you can.

Epoch Times: So how can this be changed?

Mr. Nasheed: It’s a form of suicide for the dominant white society because economically you can’t keep that system up. Your economy will collapse by trying to dominate people militarily. That’s how white supremacy has been able to sustain itself—militarily—and in the U.S. the majority of our tax dollars go into the military. Any society that tries to constantly rely on the military always ends up bad. The people in the dominant white society should come to terms with their numbers, because the people classified as white are in the global minority—white people are less than 10 percent of the global population. I think they should converse with themselves and figure out ways to not commit global suicide.

Epoch Times: You mentioned the way economics can be used to oppress.

Mr. Nasheed: Economic warfare is the name of the game. This is why they’ve been able to subjugate Africa and so many melanated countries. There’s a great book called Confessions of an Economic Hitman that talks about corporations that go into these countries and take control of the banking. When you control the money you can fund militia groups and put politicians in office. When certain countries want to be independent all of a sudden you can fund terrorist groups like Boko Haram, these weird groups pop up and these weird diseases pop up. This is all because of economics. People of color, especially black people, have been taught to not own things and this is one reason why we’re on the bottom rung.

Epoch Times: How so?

Mr. Nasheed: In the U.S., black people were basically taught that “master” would take care of everything so we shouldn’t own anything. We were brought over to work as slaves, so psychologically we think working for others is our calling in life. That’s why there are no multi-national corporations owned by black people, especially over here, and we rarely own things. So working for people in the dominant society is something that black people are going to have to get off of.

Epoch Times: Many black people in mainstream culture promote “bling.” Why are they doing this?

Mr. Nasheed: Because it’s orchestrated by the white supremacists. Who owns the record label? Who owns the media? They choose to put that on there and fund the people to do all the bling. In a global prison, the warden gets to decide who’s going to be in the forefront and who’s not. This is why black people need a code of conduct so that we can learn how to orchestrate our own funding and fund our own projects.

Epoch Times: Do you think these issues are more “bleeding edge” in America than almost anywhere else?

Mr. Nasheed: I think so. Black people here have a very unique situation. In the U.K. a lot of African brothers and sisters came directly from Africa, they came by choice. The slave trade existed out there too but many came by choice. Over here we woke up one day and were in this country just trying to survive. Also, everybody around the world benefited from our experience because we literally built the wealth of this country, and by proxy the wealth of other countries. This is why globally African Americans get somewhat of a certain level of respect from people of color, because they look to us to find out what we’re doing culturally.

Epoch Times: Could black people align to a political ideology that already exists or do you have to create your own thing?

Mr. Nasheed: Politics won’t work. Politics is controlled by money, let’s be very clear. In the 70s they put a bunch of black mayors in cities all around America and these cities went straight to hell. In LA, they had Tom Bradley, a black mayor, and that city had the biggest gang infestation ever. When you put black politicians in office it’s tokenism, because you put them out there to pretend there’s progress, but the one black politician is not doing anything for the community because he’s isolated. When this one person is in a position of power, systems of white people are behind the scenes actually running the show. Just like with Obama, we have a token person in the White House who can’t even say the words “African American” let alone do anything for African Americans.

Epoch Times: But politics is the way the world works at the moment, so how can you tackle the problem without it?

Mr. Nasheed: The system of white supremacy can stop tomorrow if they wanted it to stop. People try to make it more complex than it is. People who classify themselves as white could say tomorrow morning, “We’re going to stop dominating these people based on race.” So the question is, why haven’t the white supremacists stopped doing that?