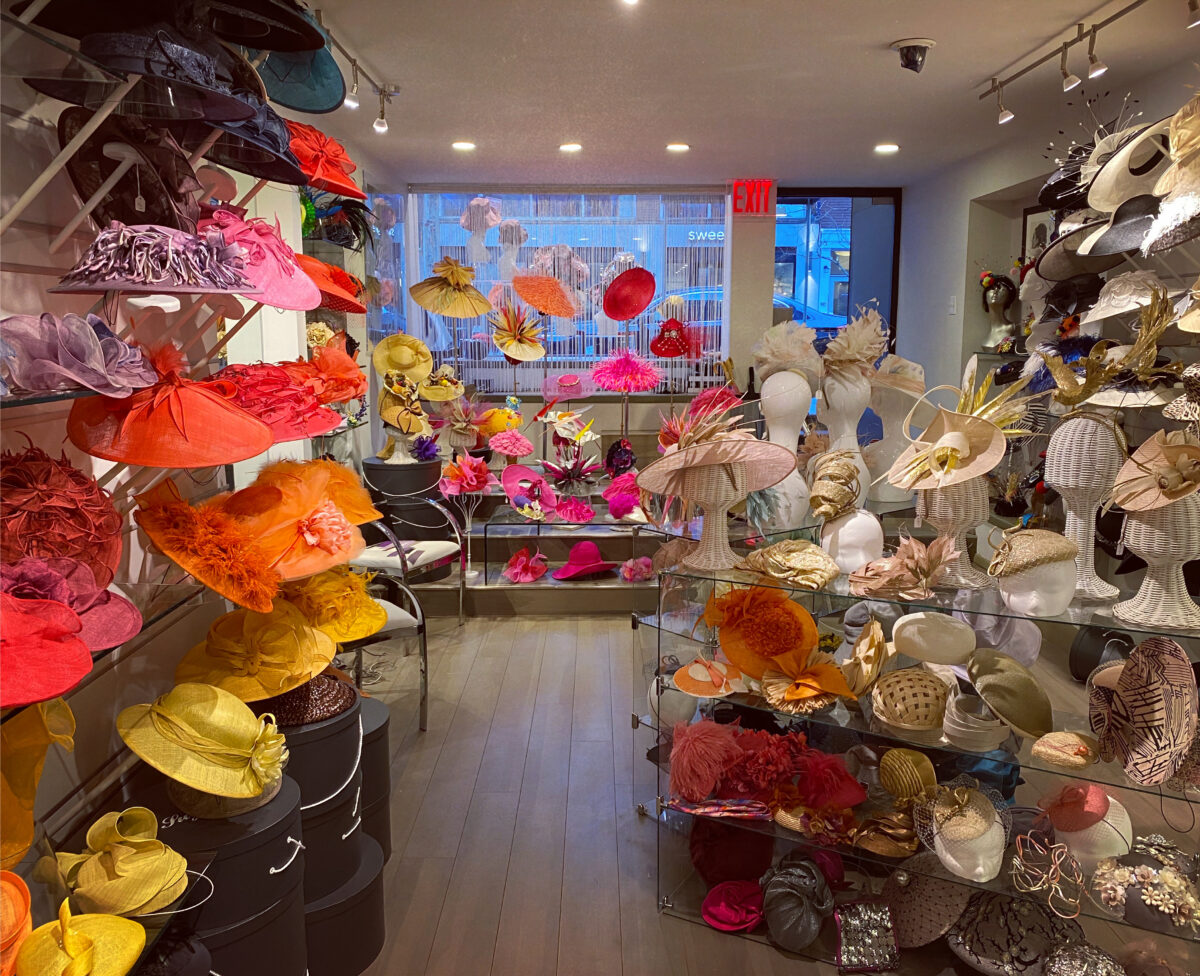 In her lovely store on 61st Street in New York City's Upper East Side, the 75-year-old milliner custom-makes the beautiful hats for the Kentucky Derby and Ascot races, weddings, luncheons, and other special occasions. (Courtesy of Suzanne Couture Millinery)
Style

Suzanne Newman, owner of Suzanne’s Couture Millinery in New York City, firmly believes that “it is rare that someone does not look good in a hat.” If someone doesn’t look good, it is simply because “they haven’t found the right hat.”

In her lovely store on 61st Street, the 75-year-old milliner custom-makes the right hats: grand hats for the Kentucky Derby and Ascot races, beautiful bridal hats, hats for luncheons, hats for any special occasion. She uses a combination of artistic instinct and sewing skills she taught herself.

Newman has always had an instinctive feeling for what looks good and a desire to make it herself. “When I was a child, I used to sew for my dolls,” she said. She never received a single sewing lesson, but she watched both her parents sew.

As a teenager, Newman was determined to follow her instinct.

“I wanted to wear a black dress to the prom and my mother wouldn’t let me. She said I was too young to wear a black dress. So,” Newman said with a laugh, “I went out and bought some fabric and a pattern and I laid it all out on my bedroom floor and I sewed it!” Not having had any lessons, she accidentally cut out two right sleeves, but her father helped her devise a way to correct the error. She wore her handmade black dress to the prom.

She made her first hat in the 1960s, when she was 16. It was a pill-box hat, “all covered in petals, and I wore it to a wedding and thought it was the cutest thing,” she said, smiling. She did not know then that it was a preview of a career.

In 1984, as a stay-at-home mom, she started looking around for something to do. One day, she entered a milliner’s shop on 59th Street and met the elderly lady who owned it. Newman told her what a lovely and interesting store it was, and she tapped Newman on the shoulder and said, “My dear, my shop’s for sale.” Newman immediately thought, “Oh boy, I would like to do this. I know I could do this.”

The process of hat-making in New York City in the late 1980s was very different. “It was much easier back then,” Newman recalled. “There were people on 38th Street who would block a hat for you, there would be people who would do the hand-sewing for you; you could go in and out of those stores.” Slowly but surely, all those little stores on 38th Street disappeared and Newman had to learn to do all the different parts of the process herself.

She acquired her own hat blocks, wooden molds used to shape hats to specific dimensions, “and I learned to block them myself using the steam iron by practicing in the back of the store. I learned through trial and error,” she said.

Newman has 100 hat blocks because head sizes range anywhere from 20 to 25 inches, some more oval and others round. “That’s why the hat is made to fit you,” she explained. There is no one-size-fits-all when it comes to the perfect hat. If someone thinks they don’t look good in hats, “maybe they have a larger head size so the hats they buy sit too high or vice versa, the hat falls down onto the eyebrows, or the crowns are too small for the width of their cheeks.”

She gradually learned and mastered all the different parts of the process. First, the client is asked to come into the store with the outfit she plans to wear to the event. Newman shows the client shapes that look good and that are appropriate to the event and the outfit, and “we decide which hat to go with.” There is always an inventory of hats in the shop for women to try, and choices are made about color, width, or decoration. Then, she described, “I block it, put it together, sew it, iron it, steam it, decorate it, steam it again, and iron it again.” The customer will then come in for a fitting, after which the hat can be tweaked slightly if needed, and finally, “hopefully they walk away happy!”

A very important part of the milliner’s job is knowing the codes of etiquette surrounding hats. Newman has learned what questions to ask about the occasion and her client’s role. At a wedding, for example, she feels that it would not be right for a guest’s hat to overpower that of the mother of the bride. Similarly, she said, “You should not wear a hat to a luncheon that’s so big it exceeds the width of your shoulders because it inhibits the waiter. It is also impolite to the person sitting next to you to have a great big hat in their face.”

Some lessons she has learned by making mistakes. Once, she accidentally sold the same hat to the mother of the bride and to the groom’s mother. There was an urgent phone call on the morning of the day of the wedding, and a flurry of activity as she prepared something else for the groom’s mother to wear. “So now,” she said, laughing, “I always ask.”

No two hats are alike, and Newman has made some special ones over the years. Once, she got a request from a bride getting married on a snowmobile in the mountains. “Obviously a long veil would not be suitable or safe for a snowmobile!” recalled Newman. “Eventually I asked her for her helmet and I covered it in white roses and put a very short veil at the back. She wore that with a white mink jumpsuit. I thought that was very special.”

Since opening, Newman’s shop has moved location several times before landing at its current address. She just experienced her busiest spring season ever, and said she feels optimistic about the future.

“Women right now seem to be feeling adventurous and willing to try new things, like a custom-made hat. And that’s really good to see,” she said.

Newman tries to stay in tune with the trends in the fashion industry so that she can create inventory that will suit each year’s fashion. She also uses her own intuition and watches what women in the upper echelons of society are wearing and doing.

Her own favorite fashion period of hats is the 1920s. She likes to wear hats herself, and described, “I have a very small face, so I tend to wear smallish hats or a small fascinator. I don’t like to be showy.” The right hat also depends upon the wearer’s personality.

Ultimately, however, the right hat exists for everyone. “You just need the right attitude,” said Newman. “It takes confidence to wear a hat.”

Hazel Atkins
Follow
Hazel Atkins is a lapsed academic with a background in English literature who now spends her time gardening, cooking, and watching her children grow.
SHARE
Friends Read FreeCopyFacebookTweet
You May Also Like