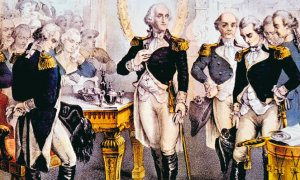 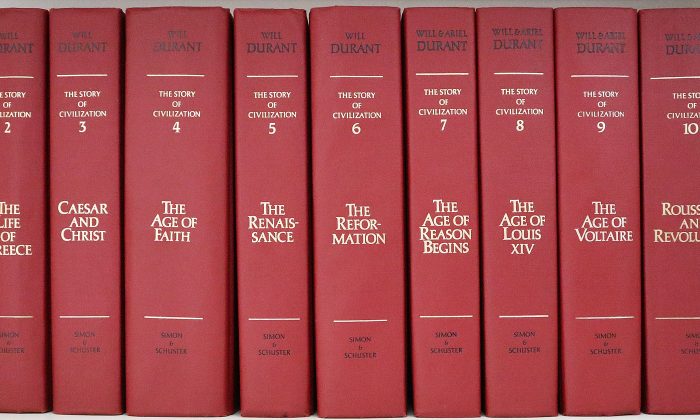 The 11-volume set of Will and Ariel Durant’s “The Story of Civilization.” (CC BY-SA 4.0)
Literature

The Rewards of Reading ‘The Story of Civilization’

For 20 years, “The Story of Civilization” sat on my shelves. Three times I boxed up this Himalaya of History and moved it with my other belongings to a new home. When I was teaching history to homeschoolers, I might open one of these volumes to seek out a pertinent person or event, and take some notes for class, but otherwise there they squatted, forlorn and ignored, good only for decoration and for gathering dust.

In December of 2017, due to a variety of circumstances, I decided to tackle Mount Durant. For my New Year’s resolution, I vowed to read my way through this massive work within one year’s time. I decided to approach the books as I would a novel—it is, after all, the “story” of civilization—rather than as a textbook, and would set aside half an hour or so every day and climb the mountain.

I should add that while I can be the soul of determination in my daily work and my commitments to others, I generally fail at keeping special resolutions. I have broken Lenten vows on the same day as making them. I have composed resolutions on New Year’s Eve and cast them aside before the next morning’s sunlight brightened the window.

The most amusing of these broken promises occurred one evening in March when my youngest son, then a teenager, asked me what I had given up for Lent. “I’m trying to stop complaining,” I said. “But it’s hard. I mean, really tough. I’m not sure I can do it.”

He burst out laughing. “I think you just broke your vow.”

Tackling “The Story of Civilization” ended differently. Before the year was out, I had finished the last page of the last volume. For once, I had fulfilled a New Year’s resolution.

And that planting of the flag on Mount Durant brought rewards.

First was the pleasure I found in Durant’s prose. (After Volume VI, his wife Ariel shares credit along with Will as co-author.) Like Churchill and some other writers of that generation, Durant is a stylistic descendant of Edward Gibbon. His formal, rolling sentences and his command of the English language might put off some readers, but I found his prose enlivening and entertaining.

In part, the entertainment came via another of Durant’s charms, namely his epigrammatic wit. Here are just two examples from the volume “The Age of Louis XIV”:

She had an attentive husband but a bewitching voice; Racine eluded the one and surrendered to the other.

Durant writes here of an actress, Marie Champmesle, who became Racine’s mistress for a time.

In the portraits that have come down to us these ladies seem a bit ponderous, overflowing their corsages; but apparently the men of that time liked an adipose warmth in their amours.

Though Will and Ariel leaned left in their politics, they brought history into print as they believed it had occurred, not as they wished it to be. Such was his success that Will Durant’s friends and readers complained they could not tell whether he was a liberal or conservative, a confusion that apparently pleased Durant. Here, for example, is a judgment from “Our Oriental Heritage” that must have produced much head-scratching among Durant’s progressive crowd:

The intellectual classes abandon the ancient theology and—after some hesitation—the moral code allied with it; literature and philosophy become anticlerical. The movement of liberation rises to an exuberant worship of reason, and falls to a paralyzing disillusionment with every dogma and every idea. Conduct, deprived of its religious supports, deteriorates into epicurean chaos; and life itself, shorn of consoling faith, becomes a burden alike to conscious poverty and to weary wealth. In the end a society and its religion tend to fall together, like body and soul, in a harmonious death. Meanwhile among the oppressed another myth arises, gives new form to human hope, new courage to human effort, and after centuries of chaos builds another civilization.

Finally, a daily dose of history reminded me of one of  the many gifts of Clio, the muse of history: perspective.

In 2018, Donald Trump was our president, and what some observers called Trump Derangement Syndrome (TDS) had reached its peak. In Washington, commentators and politicians waged a war of hysteria and accusations rarely witnessed in our national politics. Not even the Watergate scandal had seen such a heavy barrage of bitter bombast. Other commentators inflated issues like toxic masculinity and environmental ruination into crises of the first magnitude.

According to some, we were living on the brink of disaster and in the worst of times. Really?

“The Story of Civilization” is crammed with real debacles and horrendous catastrophes. Here we can visit Germany during the Thirty Years War, when hundreds of thousands of civilians were murdered or raped, when starvation was so rampant that “In Alsace hanged offenders were torn from the gallows to be eagerly devoured.” We can shamble through the streets of Paris or London in the early 18th century, when the bulk of the population lived in dire poverty, diseases now eradicated or treatable bore off citizens by the battalions, the water was often non-potable, and the streets were a stew of mud, horse dung, and garbage.

My takeaway from “The Story of Civilization”: When we neglect the past, we are prisoners of the present and the playthings of the future. When we delve into the triumphs and calamities of our ancestors, we deepen our humanity and bring perspective to our present difficulties.

Jeff Minick has four children and a growing platoon of grandchildren. For 20  years, he taught history, literature, and Latin to seminars of homeschooling students in Asheville, North Carolina. Today he lives and writes in Front Royal, Virgina. See jeffminick.com to follow his blog.