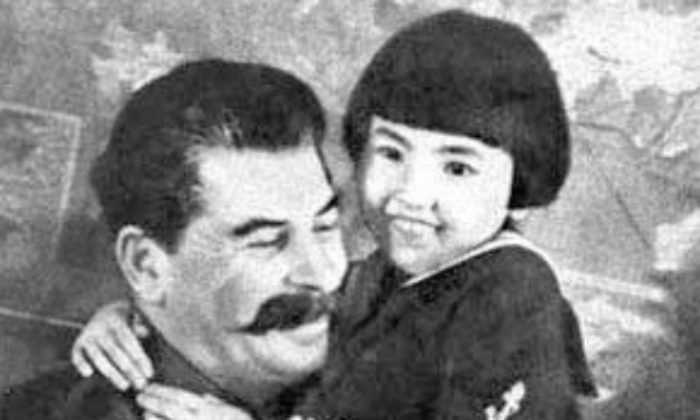 Iconic poster of Soviet dictator Joseph Stalin with a little girl named Gelya. The poster was used as propaganda to show the dictator as a father to his people. In fact, Stalin most likely had both of Gelya's parents killed. (Courtesy of William Vollinger)
The Dead End of Communism

The Reality of Soviet Art

LONDON—The Royal Academy’s Russian Revolution exhibition is vast and complicated. A realist painting of Stalin, glorified, stares from a wall in the first room. Propaganda posters, film footage, architectural models and paintings span the main galleries. Abstract works from Malevich and Tatlin are on show—artists that formed the suprematism and constructivism movements that furthered the ideas of a communist utopia.

History has shown that time and again, these ideas, in practice, end in ruinous violence. Some of the grim history is portrayed in the exhibition in the form of a small black box—a miniature cinema called a room of memory where victims of Stalin’s regime are shown in a slideshow, one by one, including the poet Osip Mandelstam, the art critic Nikolay Punin and peasants who starved to death.

While the memory box reminds us of the perilous communist ideology, walking through the rest of the exhibition in the grand Burlington House, London, the harrowing reality behind many of the artworks is not that obvious. The reality is rose-tinted as the viewer looks at history through the lens of Soviet Art.

The Russian revolution’s human cost was already vast before Stalin’s purges. During the 15-year period covered in the Royal Academy’s exhibition Revolution: Russian Art 1917-1932, millions had died of starvation through famines, and peasants were reportedly driven to the point of eating human flesh. The first gulag was established under Lenin on the Solovetsky islands in 1921 and collectivisation was enforced. The bloody results of a class genocide, and the idea of eliminating the bourgeoisie had already began.

Sentimentalising this tragic period in an exhibition without showing enough of its context is problematic.

It is unlikely the Royal Academy would have a similar exhibition on the art of the Third Reich, featuring portraits of Hitler.

Sentimentalising this tragic period in an exhibition without showing enough of its context is problematic, says Sir Antony Beevor. “One really needs to have an exhibition that is described really as propaganda, rather than just Soviet art,” he said.

“There is always a debate, for example, over the Spanish civil war, when the Spaniards tried to argue, particularly those on the left, tried to argue ‘words do not kill’. Well, one could extend that to the idea that ‘art does not kill’. But in fact it was the vicious circle of rhetoric—and indeed of posters and art—which encouraged so much of the killing. So you cannot divorce the two.”

As Sir Antony Beevor points out, the cult of personality is a theme in many of the Soviet and Nazi paintings. Muscular women workers and nudes lack any sense of emotion or eroticism, as this emotion was saved for the leader.

“Basically all human emotion, including any form of eroticism etc, had to be suppressed, so that all emotion was directed towards love for the Party and the leader, above all—this is the large part of the personality cult,” said Sir Antony Beevor.

“It was a question of the cult of the body, devoted to the cult of the personality of the leader. Again one starts to see a similarity between the two regimes in that particular way.”

By 1932, Stalin sanctioned an approach to art called “socialist realism” to use culture as propaganda. Those who did not comply were sent to the gulag. The earlier suprematism and constructivism movements, which were also furthering communist ideals but in an abstract way, were suppressed.

In the era of “socialist realism” some of the parallels between the art of propaganda in the Soviet regimes and approved art of Nazi Germany become even more obvious. The leaders of these regimes were often painted glorified in serene surroundings, fuelling the cult of personality.

Why Do We Find Communist Art So Acceptable?