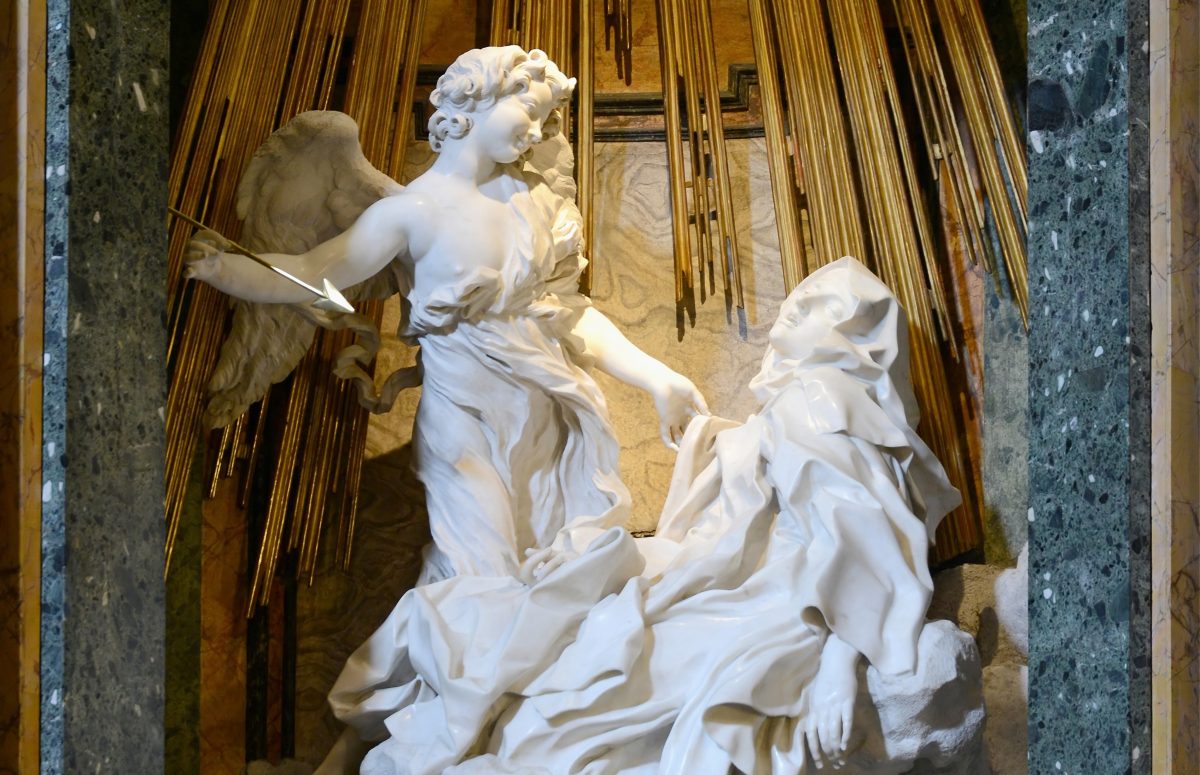 The Pure Ecstasy of Saint Teresa

Reaching within: What traditional art offers the heart
BY Eric Bess TIMEFebruary 11, 2019 PRINT

Between the years of 1647 and 1652, Gian Lorenzo Bernini produced what is considered his greatest sculpture: “Ecstasy of Saint Teresa.” One of the greatest artists living at the time, Bernini found his reputation tarnished after a mishap during the construction of the basilica of St. Peter’s Cathedral. It was later proven that he wasn’t at fault.

Certainly, he redeemed himself by sculpting the “Ecstasy of Saint Teresa.”

Saint Teresa of Ávila was a 16th-century Catholic nun. She became ill at the monastery and began to study the writings of Christian mystics. These writings consisted of spiritual exercises that required inner reflection, contemplation, meditation, and prayer. She began to have visions from her spiritual practice. And one of these became Bernini’s inspiration, which Teresa described:

“Beside me, on the left, appeared an angel in bodily form. … He was not tall but short, and very beautiful; and his face was so aflame that he appeared to be one of the highest rank of angels, who seem to be all on fire. … In his hands I saw a great golden spear, and at the iron tip there appeared to be a point of fire. This he plunged into my heart several times so that it penetrated to my entrails. When he pulled it out I felt that he took them with it, and left me utterly consumed by the great love of God. The pain was so severe that it made me utter several moans. The sweetness caused by this intense pain is so extreme that one cannot possibly wish it to cease, nor is one’s soul content with anything but God. This is not a physical but a spiritual pain, though the body has some share in it—even a considerable share.”

In this vision, Saint Teresa tells of an angel who pierces her heart with a spear. The wound from this spear causes her to feel the ecstasy of God’s love and the pain from its absence.

Bernini expertly uses marble to depict this vision. Rays of gold shine from above to illuminate the scene. The angel, depicted as serene and peaceful, is lifted by the softness of clouds and gently holds a long, golden spear in his right hand between his thumb and finger. The spear is aimed at Saint Teresa’s heart. She is presented in a state of ecstasy: Her eyes are closed, her head is drawn back, and her lips are parted.

It is safe to assume that Bernini chose to depict this event after it had begun, since she describes the angel as plunging her with the spear “several times.” But what does this all mean?

The contemporary understanding is to associate Teresa’s visions and Bernini’s depiction with eroticism. In the early 20th century, the founder of psychoanalytic theory, Sigmund Freud, popularized the theory that unconscious sexual impulses are behind the decisions we make and the experiences we have. Has a Freudian interpretation been projected onto Saint Teresa’s spiritual experiences and on this sculpture?

Instead, and even in opposition to this idea, Saint Teresa’s experience may be interpreted as the ecstasy that occurs when the mind, no longer attached to bodily urges, transcends the mundane and moves toward the sublime. Visions and ecstasy are a result of the spiritual discipline initiated during her life as a Carmelite nun. She elevated her heart and mind through the diligence of her spiritual discipline to be worthy of being touched by God.

A Freudian interpretation seems to belittle the power of Teresa’s transcendent mystical experience to nothing more than the ripple effect of bodily urges.

The visions and ecstasy of Saint Teresa were the result of a real, sincere spiritual effort and can serve as an inspiration for raising our own spirits toward what is higher and unknown.