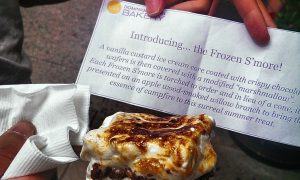 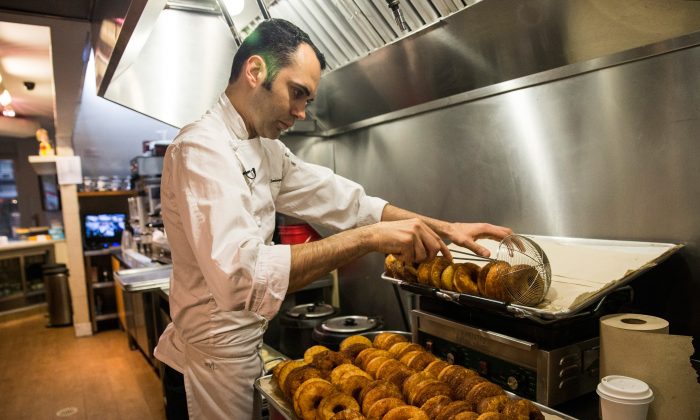 NEW YORK—Don’t talk to me before 10 a.m. My co-workers have already learned this, and it’s now a running joke—although they’re smart enough to save it for the afternoon.

It’s not a lack of caffeine thing; I’m just a night-owl trying to fit into an early bird’s life.

But on July 12, the widest of smiles managed to break through the gloom by 9:30 a.m., the earliest ever recorded in our newsroom. It wasn’t the afterglow of an amazing night out with friends, or even the rush of getting a scoop a story.

It was the fabled cronut that melted my morning frown.

The donut-croissant hybrid with a cream filling that changes each month, exploded onto the marketplace in May, becoming an overnight sensation. Hundreds of sleep-deprived, cronut-hungry fans line up at 5:30 a.m. every day outside Dominique Ansel Bakery on Spring Street in SoHo, hoping for a taste.

What keeps the line long and the craze going? I had my suspicions, but I wanted to hear what the experts thought. So I called Kevin Grisham, a professor of social science at California State University–San Bernardino.

“People have a need to add to their identity,” said Grisham. “People want to say, ‘I am hip and trendy by being a part of the cronut movement.’”

Grisham’s comments revealed an embarrassing part of my motive for volunteering for the early assignment; however, I figured with hundreds of people lining up every day, at least I was not alone.

Waiting for a Cronut

The cronut line is an adventure, featuring a variety of people, from all walks of life. I went twice. On July 5, I showed up too late, so I interviewed people waiting for the $5 treat. On July 12, realizing I couldn’t write this story without actually tasting a cronut, I arrived at 5:38 a.m. and secured a spot tenth in line.

Some people bring chairs, others blankets. Some read books, some obsessively check their smartphones, and others talk to their neighbors in line. One gentleman tried to buy a place in the line for $100. You know, normal stuff.

Jen Warren, 31, a teacher from Queens, and her husband were among the first in line on July 5. The couple was making their third trip that week.

“People think we are crazy,” Warren said, laughing. “It is an experience. The line is fun and we are meeting people from all over the place.”

New York City is seen as a global trendsetter. Years ago it may have taken weeks for trends to leave New York and months for them to go global, but social media now acts as the kindling to the fire of fad creation.

“Social media allows us to take on that identity, that typically in the past would have been much more localized. Now it is more globalized,” Professor Grisham said.

The cronut craze began on May 10 and by May 12 the Daily Mail in the U.K. had already picked it up.

Much like the cronut, with its shelf life of just a few hours, trends and fads come and go. Popularity is driven by numbers, and scarcity.

Ansel keeps the supply limited, which has helped on the local level, but now bakeries around the globe are copying and creating variations of the dessert. Pillsbury even got in on the action, using their ready-to-bake croissant rolls.

John Barajas, 49, from Houston, Texas, jumped in line with his two children at 6:20 a.m. on July 5 to bring his wife cronuts in bed for her 50th birthday. Barajas and his family had made them from an online recipe two days before, but they decided to stand in line, not only to add to their New York City experience, but to compare.

“We are going to do a little taste comparison. A cronut throwdown,” Barajas said.

Professor Grisham noted that when people begin to mimic a fad or trend, it makes it no longer unique.

“When you can find cronuts in places like the Midwest—places you don’t see something hip and trendy coming out of—that is when people start to lose steam … because then they don’t see it with being cool anymore,” he said.

Will cronut copycats be the end of this delectable dessert? Don’t count Ansel out. His marketing skills are second only to his pastry making.

On July 12, after waiting for nearly two and a half hours, the chef appeared just minutes before the bakery doors opened. He approached me with a slip of paper and asked me to pick a number between one and 10. I chose five.

I was entered in a lottery for the first taste of his newest treat, the Frozen S’more: a vanilla custard ice cream core coated with crispy chocolate wafers covered in a modified marshmallow.

I was the lucky winner and Ansel handed me his latest creation, with instructions to eat it quickly. In less than 60 seconds, the gooey creation starts sliding down the willow branch. This is a “must eat in less than five minutes” kind of dessert.

With his Frozen S’more, Ansel has figured out how to close the door on the black-market, which has plagued the cronut. People are selling cronuts on Craigslist for $40 to $100. But, the Frozen S’more is so perishable, it requires a bakery visit.

Chef Ansel is creative and business savvy, knowing the perfect way to draw people in. His pastry creations have an allure that can suck in even those who know what he is doing.

Professor Grisham knows the psychology behind the cronut craze. He knows it is a fad that will, in all likelihood, end—or at least be “so 2013” a few years down the road. Yet his academic mind cannot overtake his foodie stomach, which craves the flaky layers, the creamy filling, and sugar coated cronut.

“I think it’s funny. I have jumped into the fad myself, not just as a social scientist, but as a consumer,” Grisham said. He is visiting New York in October and already plans to visit Dominique Ansel Bakery.

My advice to Grisham, and any other cronut seekers: when you step out the door, two cronuts in hand, a smile on your face, high on the sense of accomplishment, and the blonde woman asks to buy your second cronut for $60—sell it. You only need one.