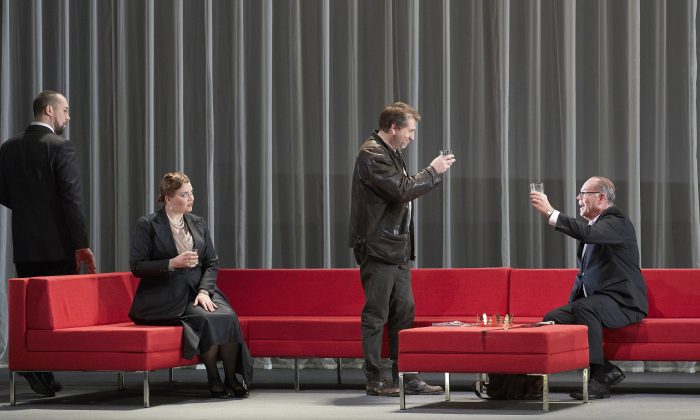 The Power of Wagner’s Epic Operas

TORONTO—There’s something about Wagner’s operas. It’s a feeling that’s hard to explain, keeping you on the edge of your seat, breathlessly hanging on to every note and word.

“There’s just something that gets inside and grabs on, and you just want to hear it more and more and follow the story over and over,” says Canadian soprano Ileana Montalbetti, who is currently performing in “Götterdämmerung”—the last opera in Wagner’s epic Ring cycle—with the Canadian Opera Company (COC).

This is Montalbetti’s first fully staged Wagner role, and she is singing the dual roles of a Norn (the Norse equivalent of a Greek Fate) and Princess Gutrune, the unwitting accomplice to the downfall of the hero, Siegfried.

“It’s just such an epic story and I think that’s so fascinating for humans,” she says.

Montalbetti compares the popularity of the Ring cycle to that of other epic stories, including “The Lord of the Rings.”

“It’s all about the search for power, the search of love. These are all themes that we humans are obsessed with and want to know more about,” she says.

“And I think that’s in particular in opera; there’s just thing that happens that you can’t explain, and that’s why you keep on coming back, ” she adds, noting there are Wagner fans who fly around the world to see productions of the Ring cycle.

As a singer, Montalbetti says she feels the musical power of opera particularly intensely.

“There’s an emotional reaction, a feeling of adrenaline that we’re telling the story all together and everything’s come together … all of a sudden we’re all coming together in the same moment focusing on one thing and I think that’s a really powerful thing.”

“We live in this society where so much of what we do is staring at screens, so to get out and be experiencing something with other people, and something so positive and joyful, I think now more than ever is hugely important,” she says.

This production by the COC (directed by Tim Albery with designs by Michael Levine) was originally part of the company’s first complete Ring cycle performed at the opening of the Four Seasons Centre for the Arts in 2006.

For the past three years, the COC has been staging one opera of the cycle each season. Starting in 2015, “Die Walküre,” “Siegfried,” and “Götterdämmerung” were all presented under the baton of artistic director Johannes Debus. “Das Rheingold,” the first in the series, is rarely performed on its own, unless a company is staging the complete Ring cycle that season.

Montalbetti remembers seeing this production of “Götterdämmerung” as a University of Toronto student 10 years ago.  She has since sung with the company several times: first with the COC Chorus, then as part of the Ensemble Studio, and then in 2013 in a star turn as Ellen Orford in “Peter Grimes.”

“It was a striking production when I first saw it and it is now wonderful to be a part of it,” she says of “Götterdämmerung.”

Montalbetti’s main role in the opera is that of Gutrune, a young princess who, along with her brother Gunther, falls prey to the manipulations of their half-brother, Hagen. The latter takes advantage of his siblings’ longing for love and prestige to get his hands on the powerful ring Siegfried holds. Hagen convinces them to trick Siegfried into falling in love with Gutrune with the help of a love potion, thereby enticing him to give his own bride, Brünnhilde, to Gunther.

Gutrune finds herself between two powerful men, her brothers, so she must keep her strength while at the same time acting as a foil with her femininity, explains Montalbetti.

“Gutrune brings this feminine quality to these scenes that are very masculine and she has these beautiful lines that sound so different from the rest of it,” she says.

Nonetheless, the princess falls into the trap.

“[Hagen and Gunther] play on her insecurities and the feeling she’s not living up to what she’s meant to do–marry someone rich and powerful and keep the family’s good name, so when the opportunity comes up, she cooperates with it,” she says.

In the process Gutrune falls in love with Siegfried, the man she deceives.

“This is her chance to not only help her family, but it also feels good to have someone look at her and say all these [romantic] things,” Montalbetti says, adding that Gutrune almost forgets it’s due to the effect of the potion.

“If you’ve never had anyone speak to you that way, then it’s kind of amazing.”

Montalbetti notes many women can identify with the excitement and nervousness of searching for someone to love, which often lead women to put blinders on and believe things they wouldn’t believe otherwise.

Gutrune goes through a character arc from a naïve young girl, to a woman in love, to one who comes to accept full responsibility for her actions.  As someone who married recently, Montalbetti says she can particularly identify with this feeling of falling in love.

Ultimately, however, it’s about the music. “For me, singing beautiful lines of music is such a joy.”

“It is a huge, beautiful story with fantastic music … it’s hard not to get swept up and be part of this hugely gripping, exciting musical experience,” she says.

The Canadian Opera Company’s production of “Götterdämmerung” runs until February 25, 2017 at the Four Seasons Centre for the Arts. For more information, visit: www.coc.ca