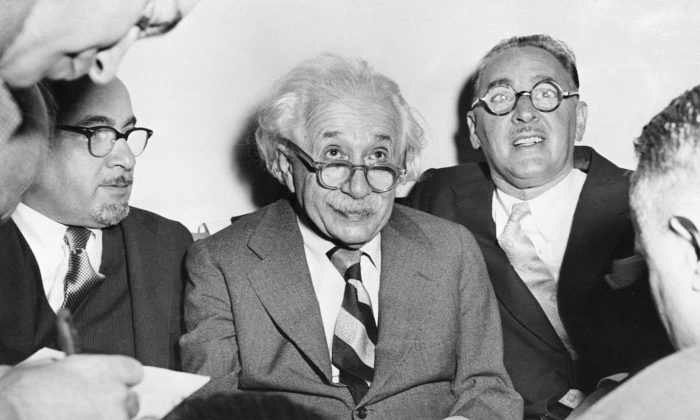 New research shows that knowing about the challenges that great minds such as Albert Einstein faced on their road to success has the ability to improve student's performance. (-/AFP/Getty Images)
Science

The Power of The Mind: Students Perform Better in School After Learning of Einstein’s Challenges

Our minds are powerful: The way we think about something literally has the ability to change our reality.

Research by Columbia University’s Teachers College found that making students aware of the challenges—both personal and academic—that great minds like Albert Einstein faced on their way to success, actually improved the student’s grades.

The study was conducted in low-income areas in the Bronx and Harlem in New York City. Researchers took 402 9th- and 10th-grade students and divided them into three groups.

Many students don’t realize that all successes require a long journey with many failures along the way.
— Xiaodong Lin-Siegler, lead researcher

One group was given a text to read about the accomplishments of scientists such as Marie Curie, Michael Faraday, and Albert Einstein.

A second group was given an 800-word text that talked about those scientists’s personal struggles. One such example being Einstein’s escape from Germany to avoid being persecuted by the Nazi’s for being a Jew.

And a third group was given a text to read that talked about the scientist’s academic challenges, and how they persevered despite the challenges they faced, such as Curie, who pioneered research on radioactivity despite numerous set-backs and went on to receive two Nobel prizes.

As it turned out, six weeks later, the students who had read about the scientist’s personal struggles or the challenges they faced in their research, significantly improved their science grades. Not only that, the students who had only read about the scientist’s achievements, and not their challenges, did not see an increase in their performance, but instead had lower grades.

From Newton to Einstein: The Origins of General Relativity

“Many students don’t realize that all successes require a long journey with many failures along the way,” lead researcher Xiaodong Lin-Siegler said in a statement.

“When kids think Einstein is a genius who is different from everyone else, then they believe they will never measure up,” she said.

The research was published in the Journal of Educational Psychology.