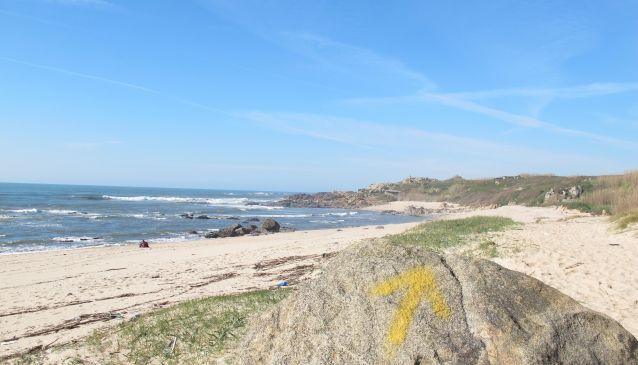 The Portuguese Coastal Way From Porto to Santiago

The Portuguese Coastal Way is a stunning alternative route of the Portuguese Camino de Santiago so most of my account concentrates on my coastal experiences. Following the Atlantic Coast towards Santiago de Compostela, the Portuguese Coastal Way starts in the colourful UNESCO World Heritage City of Porto. It takes me past charming seaside towns and villages along the coast of Northern Portugal before crossing by ferry to A Guarda, in Galicia, and the beautiful coastline of the Rías Baixas. It then reconnects with the official route at Redondela. I was able to discover the wild Atlantic beauty and sandy beaches of Northern Portugal and Galicia, tasting delicious seafood and wine, staying in fishing villages and writing and recording my experiences on the way. I thank in particular CaminoWays.com for collaborating with me and without their financial support it would not have been possible to write this or take the video of the Camino. I dedicate my Camino to the Blogger Luis Freixo the leading expert on this route and all the Portuguese caminos! His maps,advice, general support and company along with his wife Christine were invaluable.

The route is without any signage for significant parts and sometimes it follows the official route of the Caminho da Costa. It is a more quiet than other caminos and is a beautiful route for people to enjoy a landscape of beaches and dunes; being flat from the Porto to Caminha, although sometimes it presents difficulties in passing a few points, sometimes I was forced down onto the beach (hopefully at Low Tide) sometimes I had to look for a hidden bridge which can be inaccessible. In the vicinity of Porto the wooden walkways between the dunes are almost continuous so I walked close to the seashore for many kilometres.

My Camino starts in Porto, with its Old Town worthy of its world heritage status,its picturesque riverfront and home to Port wine. Porto is superbly located close to the Atlantic Ocean and overlooking the River Douro. It is one of the most ancient cities in Europe and its Old Town was born and developed from the Northern bank of the river during the Middle Ages – Ribeira do Porto. Porto’s architectural heritage is renowned. Porto is a cultural centre, a creative and contemporary city full of museums, monuments, restaurants, bars and thriving shopping areas. The Music House, National Theatre, Palace of Bolsa, D.Luis Bridge,Medieval tower and the Cathedral are particularly worth visiting. It is also famous throughout the world for its Port wines and a visit to one of the cellars is essential , many of which are clustered close to the River Douro.

I start my Camino at the top of D.Luis Bridge and head towards the Cathedral where I pick up my first Yellow Arrow then I head out following the River Douro towards the sea. However,you can take the Metro to Matosinhos if you want to avoid the outskirts of Porto and you reach close to the coast where you get off at the ‘Mercado’ stop. I cross the Iron Bridge and head left where the Yellow Arrow indicates and before I know it I reach the coastline and miles of golden sandy beaches.

The Camino is flat and easy walking as I continue north close to the sea and beaches sometimes on the cycle-track or wooden walkways. I meet the occasional pilgrim as I pass a small pretty,chapel Capela de Boa Nova then an obelisk sculpture as well as numerous beach side bars,cafeterias etc and Blue Flag beaches until I arrive at Angeiras. Here I pause to watch the fisherman repairing their nets and boats and talk about what they have caught. There is also a row of charming old cottages and Sea House Museum with interpretation board in English, a feature of the Portuguese coast. Then not too long after crossing a small quaint bridge over the River Onda I see a yellow arrow painted on large granite rock pointing ahead to the Castro of Sampaio. After climbing up to a lookout point I admire the views and where I have traveled before heading down on a wooden walkway past a small beach with curious rock formations caused by centuries of the sea pounding the coast. I then pass a small bar Rumoceano at Vila Cha with pirate statue outside a good place to stop to enjoy the local cuisine. Then the next highlight is passing through Mindelo Bird Reserve with it large expanse of sand dunes and beaches interspersed with woodland.

Eventually I reach the banks of the River Axe, cross the bridge and admire at the entrance to the charming town of Vila do Conde the enormous splendor of the Monastery of Santa Clara to the right.Vila do Conde is an ancient medieval shipyard full of historical and architectural interests whose origins go back to the year 953. The Monastery of Santa Clara which was built in 1318, Matriz Church from the 16th century, the Roman Aqueduct, River Ave and the Fortress are all worth seeing. I follow the river out to sea passing the fortress pausing to admire again the views of the Monastery, town and sea before heading towards the next town, Pozoa de Varzim which merges with Vila do Conde.

Pozoa de Varzim is a popular resort for the Portuguese and many people especially from Porto have holiday homes in the area. As well as resting on the long stretches of beaches, the fort close to the casino is worth a visit.

I continue to head north along the coast in the direction Esposende. I cross the Coastal Natural Park, Parque Natural do Litoral Norte. I pass lots of agricultural land and glasshouses as well as Estela Golf Course. I then pass the attractive windmills at Apulia set into the dunes. Not long after on my left there is a row of beach-side restaurants One of these Restaurante A Cabana, a family run business who recently celebrated their 30th anniversary, is reputed to be in the Top 50 Portuguese restaurants. They have grilled seafood and local meats which are outstanding and a feature of the food on the Camino is its amazing value for money! I have a skewed squid kebab with green peppers and a jug of vinho verde white wine,it was absolutely delicious! Then after leaving Apulia behind I travel through a beautiful pine forest before arriving at the pretty village of Fao where I first see a spectacular bridge over the River Cávado.

Copyright © 2014 by My Destination. This article was written by Mark Auchincloss and originally published at My Destination Galicia