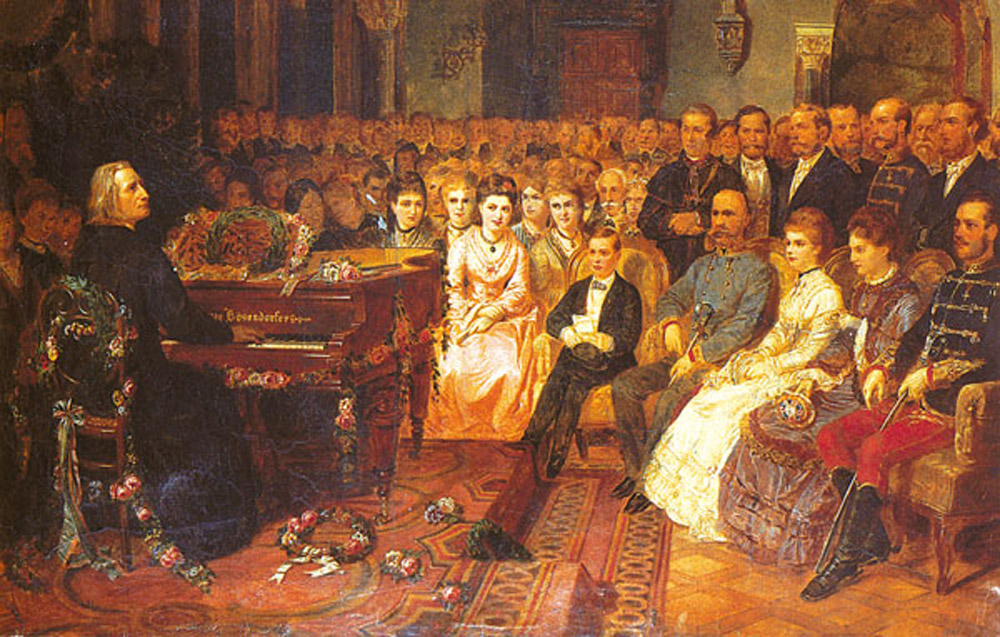 Liszt giving a concert for Emperor Franz Joseph I, before 1890, by an unknown artist. (PD-US)
Music

Hungarian composer Franz Liszt (1811–1886) was a virtuoso pianist of the Romantic movement. The prolific composer, performer, and teacher composed 700 pieces in his lifetime. A child prodigy of a musical family, he performed for well-known musicians and royalty by the time he was 9 years old. Regular traveling and performing in his youth led Liszt to develop nervous exhaustion and to consider spiritual alternatives. Young Liszt told his father, Adam Liszt, that he wanted to become a priest.

To improve young Franz’s health, Adam took him to the sea in Boulogne, France, where Adam died of typhoid fever. The traumatic death of his father led Franz at age 15 to turn away from music for several years while he focused his inquisitive mind on the study of religion and art.

In his early 20s, Liszt returned to composing and performing. He was a virtuoso performer who gave solo recitals completely on his own. The devoted pianist delivered piano music to innovative new places by creating chromatic harmony. He also developed what he called a “symphonic poem,” a single movement that encapsulated the dramatic complexity of a literary work and combined all the compositional elements of a traditional, four-movement symphony.

The death of his friend and fellow composer Frederic Chopin inspired Liszt to briefly create works in genres that Chopin made famous, such as the nocturne. Liszt’s three-part “Liebestraum,” meaning “Dreams of Love,” is a series of three nocturnes that represent different types of love as expressed by three associated poems. Like German “lieder” of the Romantic era, they were songs that could be combined with poetry or performed as solo piano pieces.

The first nocturne in “Dreams of Love,” “Liebestraum No.1,” is based on Johann Ludwig Uhland’s poem titled “Hohe Liebe” or “Exalted Love.” The poem is about spiritual exaltation in which a person “gladly disowns” the “joys of Earth” in favor of the “golden beyond.” Of the three pieces, this nocturne is the most peaceful and restrained. Pensive notes are held at length while layered arpeggios and rapidly ascending notes allude to the “heavens above” that “have parted.”

“Liebestraum No. 2” is based on Uhland’s poem “Seliger Tod” or “Blessed Death.” Liszt’s second nocturne in the series intentionally exists in stark contrast to the first. The piece is about humanity’s experience of love born out of fleeting physical intimacy. The piece flares up dramatically, eventually coming to an abrupt and somewhat dismal end. Uhland hints that this “love” may allow a viewer to be “awakened” or even to glimpse “heaven,” and yet, like all of our experiences in the flesh, it is not meant to last.

Ferdinand Freiligrath’s poem “O Lieb, so Lang du Lieben Kannst,” or “O Love, as Long as You Can,” is the basis for Lizst’s third and final nocturne of the series, “Liebestraum No. 3.” This final piece speaks of a love that transcends the “death” of the previous poem. It is a bittersweet reminder to love those we hold dear because “the time will come” when we may no longer have them. The song emotionally builds to an intense crescendo, but it ends in a peaceful feeling reminiscent of the first nocturne. It seems to hold the hopeful message that through gratitude and cultivation, love is ever-present. Although loved ones depart, we may continue to seek the “exalted love” that only the divine can provide.