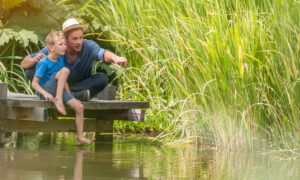 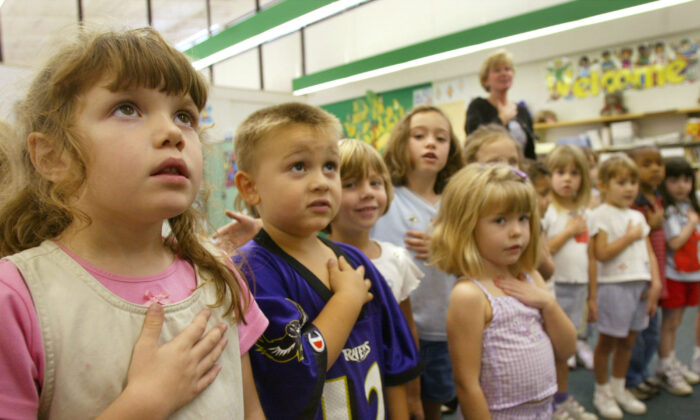 The Pledge of Allegiance: Weaving Strands of Patriotism Into the Fabric of America

In public schools all across the country, children rise—or they can choose to sit and listen—as they recite “The Pledge of Allegiance.” But allegiance to what?

They turn toward the flag, place their right hand over their heart and say this sentence: “I pledge allegiance to the flag of the United States of America, and to the Republic for which it stands, one Nation under God, indivisible, with liberty and justice for all.”

These words were first composed in 1892 as the country was still reeling from the shame of fratricide during the Civil War. Though the war had been won in 1865, the country was neither unified nor at peace. That was the era of “The Reconstruction,” a time of great upheaval. During these decades of civil conflict—even impeachment efforts—Americans were also having to keep up with ever-growing urbanization, as well as the introduction of a national currency and the settling of the West.

The temperance and suffrage movements began at this time as well, bringing with them added force to the already hard blowing winds of change.

Perhaps most importantly, these years saw the greatest increase of immigration into the United States from Eastern and Southern Europe in its history. The new American immigrant was very different from his predecessor. He didn’t think like someone of English origin, nor did he worship like him.

In other words, even though the Founding Fathers had created America, the American was yet to be born. Those men and women who had made this country their home would have identified themselves as primarily citizens of their state.

Even before the divisions of the Civil War, this regionalism was as true in the South as it was in the North. Such regionalism was of course dangerous because it contained the potential to pit American against American, which it finally did in the 1860s. President Abraham Lincoln saved the Union, but the conflict debilitated the American project. The question of disunity was therefore in pressing need of a solution.

There were many ideas of how to unify the nation, but one of the most popular and novel ideas was to use the public schools to foster a sense of national unity or identity. This was a rather revolutionary concept because public schooling was practiced on a very local basis in this country well into the 20th century. Since America didn’t have a nationally organized educational system, the idea was to create a unified curriculum.

In the spirit of the Founding Fathers who were well-versed in their Roman history, it was decided that the solution ought to be centered upon a symbol that could represent everyone. The Romans had their republican motto, “The Senate and People for Rome,” Christians had the cross, and Americans would be represented by their flag. Veteran groups such as the Woman’s Relief Corps and the Grand Army of the Republic played a central role in placing American flags in every classroom across the nation. This goal became known as the schoolhouse flag movement. There was also a popular magazine, designed to appeal to the whole family called “The Youth Companion,” which promoted the movement.

Toward the end of the century, the patriotic movement was searching for ways to renew itself. America was getting ready to celebrate the 400th anniversary of its discovery with the Columbian Exposition of 1892. A national committee of educators and civic leaders was also organizing a celebration of the first “Columbus Day” on Oct. 12, which would center around the flag.

Francis Bellamy, who was the marketing director of “The Youth Companion,” was also the chairman of the committee, and wanted communities across America to celebrate their own local “Columbus Day” with gatherings at the public schools. To promote this idea “The Youth Companion” designed a simple kit which explained the proceedings. As a part of this kit, Bellamy included his original version of “The Pledge of Allegiance,” which read: “I pledge allegiance to my Flag and to the Republic for which it stands: one Nation indivisible, with Liberty and Justice for all.”

These words have come to express both the historical heritage that gives the United States its indelible strength and its commitment to truth, unity, and freedom.

Changes to the Pledge

Subsequent changes to the pledge as we know it today were based on worries that it didn’t say which flag one was pledging allegiance to. The State of New York was the first state to legislate the recitation of the pledge of allegiance in public schools, but no form of the pledge received official recognition by Congress until June 22, 1942, when it was formally included in the U.S. Flag Code.

Finally, the last change in language came on Flag Day 1954, when the words “under God” were added.

The world was in the midst of the Cold War, and there was a pressing fear in Washington that Indochina, Malaysia, Burma, India, and even Japan might fall into atheistic communist hands. After all, Soviet Russia had two pro-communist magazines called “Godless.” The fear was that from Moscow to Asia, communism might prevail on the geopolitical stage. President Eisenhower repeatedly used his speeches to point out the godless nature of communism until by executive order, on Flag Day 1954, he specifically ordered the pledge to read “one nation under God.”

This history teaches us an important lesson of American identity: One of the most important things in our lives—and in our world—consists in recognizing where our freedoms, rights, and self-evident truths come from. The Pledge of Allegiance has been weaving the strands of pious patriotism into the fabric of American society for over a century. It helped unify the nation in the 19th century, fight the Cold War in the 20th century, and it is worth conserving as we progress into the 21st century and hope to protect the unity that our brave forefathers fought and died for.

Journalist Wilhelm Höjer is a Swedish native who studied philosophy and journalism at The Angelicum in Rome. In 2020 he began teaching at the classical Christian school Lindisfarne Hall on Amelia Island where he and his wife Sally live with their new son Crispin.