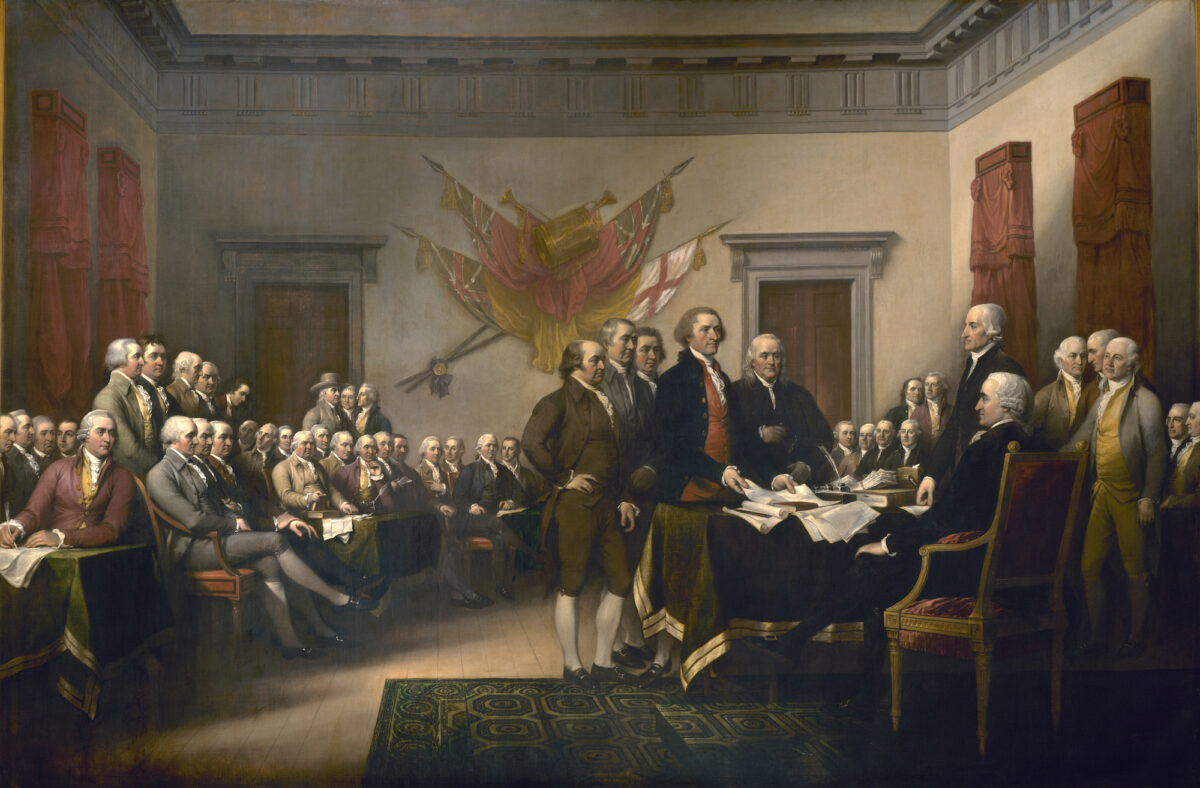 The Picture of American Independence

Art exploration for the young and young at heart
BY Andrea Nutt Falce TIMEJune 28, 2022 PRINT

“The establishment of our new Government seemed to be the last great experiment for promoting human happiness, by reasonable compact, in civil Society.”
—George Washington, in a letter to Catharine Sawbridge Macaulay Graham, Jan. 9, 1790

We’re living in the Great Experiment. Established less than 250 years ago, the United States is founded on the revolutionary conviction that independence, hard work, and honor can bear great fruit. Americans benefit from a prosperous legacy of faith, hope, and grit. The treasures of our heritage are a gift that each generation has the power to squander or save.

On July 2, 1776, more than a year into the arms battle for sovereignty, the Continental Congress first approved a resolution declaring U.S. independence from Great Britain. The document, which came to be titled the Declaration of Independence, was drafted and presented by the Committee of Five, which included its primary author, Thomas Jefferson of Virginia, as well as Benjamin Franklin of Pennsylvania, Roger Sherman of Connecticut, Robert R. Livingston of New York, and John Adams of Massachusetts.

In honor of its drafting, Adams sent a letter to his wife Abigail. He wrote: “I am apt to believe that it will be celebrated, by succeeding Generations, as the great anniversary Festival. It ought to be commemorated, as the Day of Deliverance by solemn Acts of Devotion to God Almighty. It ought to be solemnized with Pomp and Parade, with Shews, Games, Sports, Guns, Bells, Bonfires and Illuminations from one End of this Continent to the other from this Time forward forever more.”

July 4 is the date emblazoned at the top of the Declaration of Independence because that day marked the final revision of the extraordinary document. Adams’s predictions proved correct. The first commemorative festivities for freedom began in the following year, 1777. In Boston, on the first anniversary of the signing of the Declaration, there were fancy dinners, fireworks, and songs. In Philadelphia, ships pulled up and blasted their cannons 13 times for the original colonies to honor independence. There were military displays, small arms fired, fine patriotic colors donned, bells wrung, and more fireworks blasted. It was reported that “the face of joy and gladness was universal.”

U.S. history recounts the trials, celebrations, and hopes of men and women for freedom. Though in truth, all history is a story of the human struggle for freedom, American history remains exceptional for its courageous success. The United States was created to stand firm against the age-old and inevitable overreach of avaricious government. We’re the land promised to men and women of conscience, individuals devoted to life, liberty, and the pursuit of happiness.

Along with our freedom and prosperity, the spirit of honorable people who blazed a trail to American liberty and independence is rightly commemorated on the Fourth of July. Deep thought and true action are a great portion of our inheritance. Lessons taught by freedom fighters are emblazoned in our minds and on our hearts. Letters, archives, art, and artifacts help us recall what we’re made of and what we were made for.

The work of one Early American artist serves to preserve history particularly well. While you’ll certainly recognize his commemorative work, have you ever been introduced to the character of John Trumbull?

Born in Rhode Island in 1756, Trumbull lost the use of one eye in a childhood accident. Perhaps the accident contributed to his unique perspective. He was a soldier in the American Revolutionary War and an aide-de-camp to Gen. George Washington. He was at the Battle of Bunker Hill, and he painted it! While serving in Boston, he sketched plans of the British and American battle lines to help his budding nation.

Though he earned a less creative degree from Harvard and spent the first years of his adult career as a soldier, Trumbull proved so passionate about art that after serving in the U.S. Continental Army, he sailed to England to pursue painting. Trumbull took a serious risk entering the nation he’d fought against, in order to study traditional methods of painting, and, while in London, his anti-British sentiments gained attention.

On Nov. 20, 1780, in reprisal for the hanging of a British major by Americans for spying, Trumbull was arrested by British authorities on the charges of high treason. He was held in prison until June 1781. When the influence of powerful friends finally effected his release, Trumbull was given 30 days to leave England.

Trumbull returned to Connecticut, where his father had served as governor between 1776 and 1784. While a painter’s profession was less than favorable in the eyes of the prominent Trumbull family, Trumbull pursued his chosen path with American determination. He became the portrait artist of American history.

Today, the artist is better remembered than any politician among his once-powerful relatives. Do you know what Alexander Hamilton looked like? Think of the $10 bill. That iconic image hails from a Trumbull portrait. When one envisions the signing of the Declaration of Independence, it’s likely the imagination drafts in part from Trumbull’s most famous work, accordingly titled “Declaration of Independence.”

It took the artist almost five years and many meetings with American leaders, especially Jefferson, to gather working sketches of the signers. He completed the large painting in 1819. Though some believe his smaller images of the signing were better, Trumbull’s “Declaration” remains a monumentally significant historical work of art.

If history is the story of the events, ideas, and actions that have affected people in times past, art comprises the pictures and soundtracks of their tales. Trumbull was a soldier, secretary to statesmen, and a prisoner of war, but the most lasting contribution he made to his nation came in the form of art memorializing the American spirit.

As Adams pointed out, the way we commemorate—how we remember—matters. The only part Adams seemed to mistake about American Independence was the date we’d celebrate. Adams believed Independence Day should be honored on July 2. So staunch was he in that opinion that he would refuse invitations to celebrations held on July Fourth! Still, the Fourth was a powerful day in his life and death.

The two leaders had major differences and disagreements, but they were united in writing, hoping, and striving for a great nation. Perhaps divine providence pulled them together.

Jefferson once wrote to Adams: “The simultaneous movements in our correspondence have been really remarkable on several occasions. It would seem as if the state of the air, or state of the times, or some other unknown cause produced a sympathetic effect on our mutual recollections.”

He was right in the essentials. In Trumbull’s work, the two giants can still be seen standing together with strong early Americans. Fine works memorialize fine lives. Through both, the vision of American independence survives. It falls to us whether we strip or invest the incredible inheritance of American freedom and prosperity.

In the words of Ronald Reagan, a modern U.S. president who carried the torch, “Freedom is never more than one generation away from extinction. We didn’t pass it to our children in the bloodstream. It must be fought for, protected, and handed on for them to do the same.”