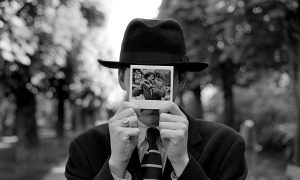 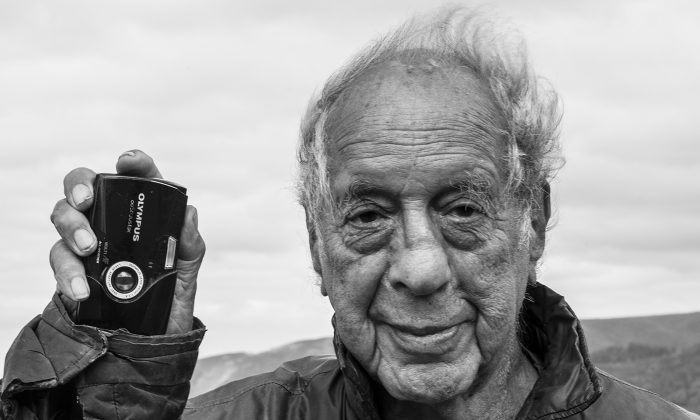 The Photographer Who Loves America

Revisiting 'The Americans' with Robert Frank
By Milene Fernandez
Print

NEW YORK—Robert Frank composed his photographic portrait of the country, “The Americans,” like a silent lover who gives attention generously but remains elusive.

He would observe people at close distance, unnoticed, sometimes for a long while, before pressing the shutter button on his camera.

“The Americans” was first published in 1958, nearly 60 years ago. The 83 photographs Frank selected for the book, from the 28,000 shots he took on the road for two years in 48 states, have become decidedly iconic. It’s an ironic outcome for a photographer who is adverse to fame and publicity, and who has been consistently called an iconoclast.

The 92-year-old, Swiss-born photographer continues to be grateful for his adopted country. And he still doesn’t like to talk to people much. At the urging of a friend, he agreed to an interview.

“I always say it [America] is a very good country,” Frank said in his home in the East Village. “There’s much criticism about what they do politically or whatnot, but I think it is a generous country.” He looked at the tree facing his window; he had it planted decades ago, when he first moved into the neighborhood. “I love New York. America is the place to be because it’s happening here. Where else would you go?” he said.

Frank never compromised in his devotion to his vision, in what he believed. “The Americans” had to be published by a U.S. publisher; it could include no biographical text and no explanations accompanying the photographs, only the title and location on adjacent blank pages; and the introduction had to be a perfect match—written by his equally iconoclastic, Beat Generation friend Jack Kerouac, who also zigzagged across the country.

Kerouac wrote in the introduction, “As American a picture—the faces don’t editorialize or criticize or say anything but ‘This is the way we are in real life, and if you don’t like it, I don’t know anything about it ’cause I’m living my own life my way and may God bless us all, mebbe’ … ‘if we deserve it.'”

“The Americans” is not an idyllic portrait of America, of people showing perfect smiles with perfect teeth. Frank generally had more sympathy for the sufferings of the lower class and those living on the fringes of society.

“I find them more interesting,” he said. “It was easier to talk to them, and they were more interested in me.” He then chuckled, “My mother would say to me, ‘Why do you always photograph poor people?’ Funny thing to ask me.”

He often caught people unawares, capturing those who would have never been seen otherwise and giving them a more honest, spontaneous presence in his photographs. They have become a part of our broader national imagination.

There is only one warm smile in the entire book—a black woman sitting on a chair in the middle of a field with her back to a sunset or sunrise. It’s one of the rare photos for which Frank actually asked someone to pose.

Most of the time, he would take a photo and walk away. “Once I had contact with a couple. They were imprisoned, and the girlfriend called me up and said, ‘I want some money.’ That’s the only time a person I had photographed called me up. I gave them $20,” Frank said chuckling.

When “The Americans” first came out in 1958, the photographs were criticized for being sloppy, haphazard, grainy, and so on. The people, places, and events portrayed were not Hollywood-movie heroic: pensive men wearing hats at a funeral, a single man yelling at a political rally, strangers walking past each other on the sidewalk, assembly line workers numb to the rhythm of machines, a man getting his shoes shined in a railway station men’s room, a couple having a tender moment at a charity ball, a man sleeping on the ground by a tree in a public park, a lone coffee shop waitress behind a counter, an ominous mining town seen from a hotel window, an infinitely desolate-looking highway, or an exhausted family, sitting in a car.

The images are powerfully memorable—and the feeling is generally melancholic. Frank caught people between thoughts while enduring their daily existence. As Kerouac famously wrote in the introduction, “Robert Frank, Swiss, unobtrusive, nice, with that little camera that he raises and snaps with one hand he sucked a sad poem right out of America onto film, taking rank among the tragic poets of the world.”

Frank has always been curious, interested in life, but critical.

“A simple book, ” Frank said leafing through the fourth edition (2014, published by Steidl). “I look at it now, and I’m still satisfied with it, and it’s hard for me to be satisfied with my own work. I’m critical about it. I guess I got that from Switzerland. That’s true, what they say. If you try to do something, do it right, otherwise it’s not worth it,” he said.

The best advice he would give to younger photographers is “keep your eyes open,” he chuckled. “Well, to be a good photographer you have to be curious, and you have to work at it.”

Then he gave his version of the American Dream that he has lived: “You follow your way. I found this to be very important, that you stick to something that you believe in and not make compromises. Whatever you believe in, if you believe in it, it will be okay. You can do it. It doesn’t mean that you will be successful at it, but at least you believed in it to do it,” Frank said.