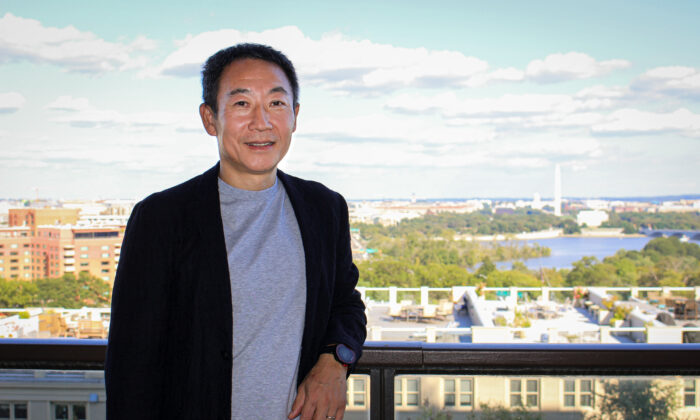 The Philanthropic Journey of a Chinese Entrepreneur

Chinese-born businessman and investor Dong Feng, 57, found himself at a crossroads in 2006 after realizing there is more to life than a successful career and financial freedom. In his early 40s Dong lost a very good friend to suicide, which fundamentally changed the way he viewed the world and his life’s purpose.

Fifteen years ago, Dong participated in a Chinese reality show where he learned the importance of giving and helping others. Since then, he has embarked on a new journey, dedicating most of his time to charity projects in China and most recently the United States.

Dong spent more than eight months in the reality show in 2006, hiking 6,100 kilometers together with 25 other participants. They walked every day, crossing rivers and mountain ranges, even under extreme weather conditions. He suffered from muscle soreness, joint pain, and blisters and encountered many unwanted surprises including leeches, scorpions, and lice. In a short time, he lost 20 pounds.

“I learned a lot of things,” Dong told The Epoch Times, including “how to deal with people, how to manage your emotions and thoughts, and how to stay in tune with nature.”

Hiking through the Chinese countryside made him understand the huge gap in education between the rural and urban areas of China.

At one of the rural schools he visited during the hike, Dong witnessed a conversation between a teacher and a student, which shocked him.

The student asked the teacher where people sit on a plane. “In the wings,” the teacher responded.

The rural population in China is over 500 million, and the education in rural areas has been marginalized for a long time, according to Dong. Teachers in poorer parts of China have “limited knowledge, resources, and life experience” compared to their counterparts in larger cities, he said. In addition, they have very low salaries, “usually less than one-fifth of their counterparts in the city.”

“They are not valued, respected or trained enough, resulting in an atmosphere of low morale that is then passed on to the students.”

In order to responsibly teach the next generation, Dong noted, teachers need proper training and experience.

This was the idea that inspired the iFly program, where hundreds of rural teachers were invited to visit Beijing and Shanghai for ten days every year.

Thanks to the iFly program, teachers experienced many things for the first time in their lives, including flying on a plane, riding on a train, visiting the Great Wall, receiving a physical checkup from a doctor, and watching an opera. The project has inspired many other groups to launch similar programs expanding the reach.

“Poverty in rural China is one of the results of the nationalization of the land. Every Chinese is a temporary resident and tenant on the land of his ancestors,” Dong said.

To fundraise for iFly, Dong decided to take another wild adventure in 2014. He cycled from the Northern tip of Japan to the Southern tip, becoming the first Chinese to complete this bike ride. And he blogged his journey to attract donors and supporters.

The bike trip took 44 days during which Dong encountered two typhoons and a volcano eruption.

From 2007 to 2019, iFly program trained over 3,000 teachers from rural schools, indirectly helping over 100,000 students. The program was halted due to the pandemic.

In 2019, Dong moved to the United States to attend a leadership course for Chinese NGOs at Georgetown University for a year, which was sponsored by Daofeng & Angela Foundation, a Maryland based non-profit organization founded by a Chinese philanthropist He Daofeng. During his time at Georgetown University, Dong studied English and learned how to operate a high impact charity organization. This experience has “profoundly changed” his life.

Since then, Daofeng has also become “a great role model” for Dong especially in his charity works.

The content of the lectures at Georgetown University changed Dong’s “values and worldviews, which had been formed by years of brainwashing education in China.”

Dong was inspired by Matteo Ricci, an Italian Jesuit missionary who introduced Christian teaching to China during the Ming Dynasty in the 16th century. Besides the religion, Ricci also brought European astronomy, geography, and mathematics to China and lived almost half of his life in the country until his death.

Due to his “atheist education and worldview,” Dong initially could not understand Ricci’s motivation to devote his life to China. His curiosity inspired him to learn more about Christianity.

“I found that faith can give people a purpose and energy that can’t be summoned by secular beliefs,” Dong said. “I also started to realize what it means for the United States to be a nation founded on Christianity.”

In 2019, he co-founded an organization that supports domestic and international evangelical missions and trains missionaries.

During the early days of the pandemic, Dong turned his attention to medical supply shortages in the United States and joined an initiative dedicated to procuring masks and medical equipment for the U.S. healthcare workers on the front lines.

By July 2020, he and his team managed to procure over 1 million masks from China despite many challenges in supply and shipping.

And in early 2021, Dong founded the Bedrock Foundation in Washington, D.C. with a mission to support education. He donated $5 million to the foundation this year.

Dong believes that the education system should inherit and defend “the traditional values of conservatism, which is the foundation for the United States to remain a lighthouse country and also the support of civilization and the security of human society.”

He noted that his new foundation would work on helping promote traditional values.

“In my eyes, the most precious spiritual wealth of the United States is the Declaration of Independence, the U.S. Constitution, and the Bill of Rights, which are great contributions to mankind. They are all based on the Bible,” Dong said, emphasizing the importance of respect for  equality and freedom in human life, a limited government, and a market economy.

“Defending traditional values and returning to God requires more voices and actions, and we are willing to join them,” he added.

Dong says for the past 15 years, his journey has helped him grow from a profit-driven entrepreneur to philanthropist, and then from an atheist to a believer who has gained a deeper understanding of his life purpose, which is to make a positive change in society through philanthropy.