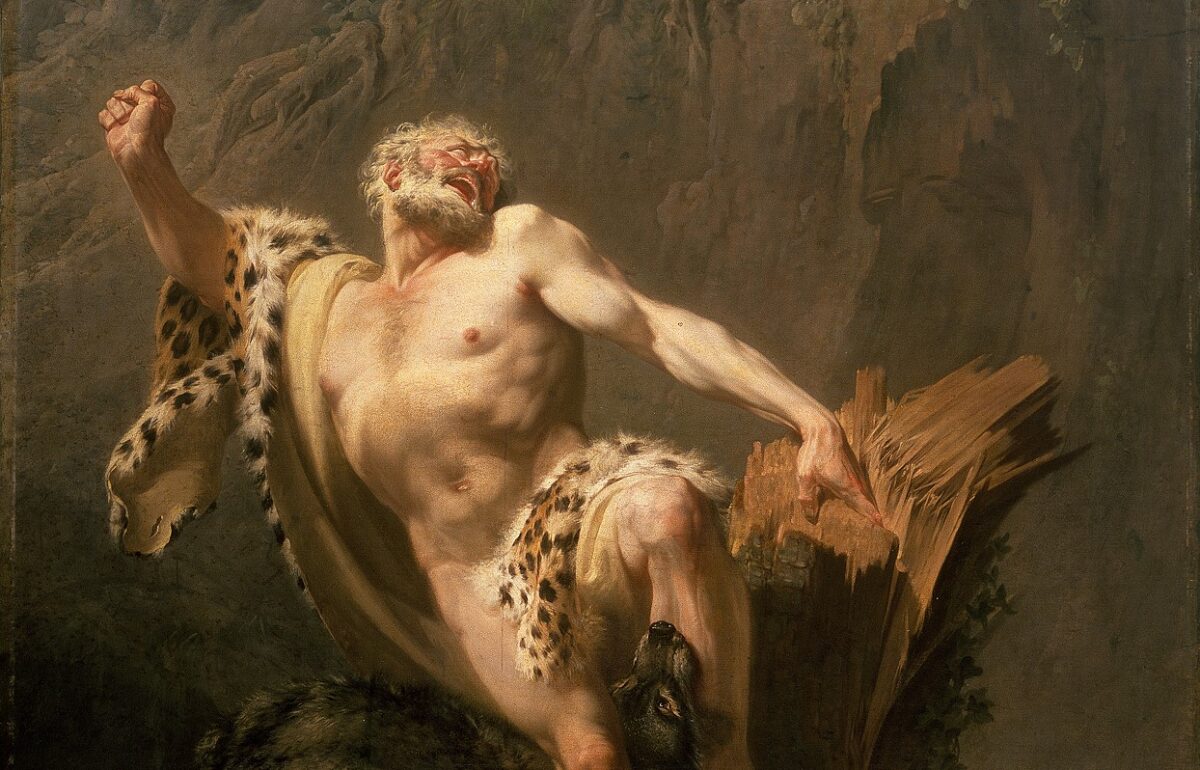 A detail showing the agony of Milo of Croton, whose pride led to his death. “The Death of Milo of Croton,” 1761, by Jean Jacques Bachelier. Oil on Canvas, 96 inches by 75 inches. National Gallery of Ireland. (CC BY-SA 4.0)
Arts & Tradition

The Perils of Pride: ‘The Death of Milo of Croton’

Reaching Within: What traditional art offers the heart
BY Eric Bess TIMEAugust 14, 2022 PRINT

Have you ever watched someone try to show off and then suffer instant repercussions for their actions? In ancient Greece, pride was sometimes considered dangerous. Myths such as Icarus flying too high to the sun and Narcissus looking at his own reflection served as cautionary tales that revealed the dangers of pride, hubris, and vanity.

Milo of Croton, now popular in fitness circles, was another citizen of ancient Greece whose life story may serve as a warning of the consequences of pride.

Milo was an athletic phenomenon in the sixth century B.C. and was revered for his superhuman strength. Competing into his 40s, he won at least five consecutive Olympic titles, seven titles at the Pythian Games, ten titles at the Isthmian Games, and nine titles at the Nemean Games. These accomplishments are incredible, even by today’s standards.

He also used his strength to help his friends. When a neighboring town attacked Croton, Milo led his fellow citizens to victory while dressed like Herakles. In another instance, Milo saved Pythagoras and his followers from a falling roof by using his strength to support the central column until everyone reached safety.

These are instances in which Milo’s strength was used to create positive outcomes around him. Protecting his friends and dispelling danger was definitely a positive outcome for his community. Even the games, as long as the competition remained respectful and friendly, could create a sense of harmony not only within his own community but also between communities.

How did Milo acquire his incredible strength? As legend has it, he saw a newborn calf near his home and decided to pick it up and carry it. He did this every day for four years. But at the end of four years, he was no longer carrying a baby calf but a full-grown bull. His strength adapted to the slow, incremental change in the animal’s weight.

There were instances, however, in which Milo allowed his pride to determine how he used his strength. For instance, he would show off his strength by having others try to take a pomegranate from his hand. No one could remove the fruit from his hand, nor could they cause him to damage the fruit by their efforts.

He would stand on a greased iron disk and challenge others to push him off. He would challenge people to bend his fingers, and all were unsuccessful. He would even tie a cord around his head and, by holding his breath, would break the cord with the bulging veins in his forehead.

This type of pride would eventually be his downfall. One day, as Milo was getting on in years and his strength began to diminish, he saw a lone tree stump left partially split with a wedge. Milo wanted to show off his strength by completely splitting the tree apart with his hands. When he tried, however, the wedge fell out. He did not have the strength to split the stump apart; instead, it closed on his hand. Imprisoned by the tree stump, wild beasts eventually devoured him.

Bachelier’s ‘The Death of Milo of Croton’

French painter Jean Jacques Bachelier painted his own interpretation of Milo’s death. The figure of Milo is presented as the focal point. His body is arranged diagonally from the upper left-hand corner to the bottom right-hand corner of the composition, and this diagonal arrangement gives the viewer a greater sense of energy than a horizontal or vertical position would.

Wearing what appears to be a leopard skin, Milo writhes in pain as his hand is stuck in the tree stump to the right and two wolves attack him from below. He tightens his free hand into a fist and throws his head back in agony as one of the wolves bites his leg. The natural landscape frames the scene, and a small insect at the bottom right of the composition watches the scene unfold.

What wisdom might we gather from Milo’s story and Bachelier’s painting?

First, it’s necessary to recognize that Milo acquired his strength by following the natural course of human life. Let us consider that the calf represents nature itself. Every day he picked up his calf and every day his strength adjusted to the weight of the calf, until the calf grew into a bull. Milo became strong insofar as he worked in accordance with the natural course of things.

Milo did not exert a whole lot of effort to acquire his strength; it happened naturally over time. The result would have been different if he had pridefully tried to pick up a bull to show off his strength from the very beginning. That would have been a sure way of injuring himself, for the weight of the bull would have been too much for his initial level of strength. It was not through hubris but through patient consistency that he gained his strength.

The story and painting make apparent the point that Milo literally attempts to tear a tree trunk apart as an exhibition of his strength in his older age. The act itself—the ripping apart of an element in nature—is representative of his resistance to following the course of human life.

To me, the negative consequence of ripping apart the tree trunk is not to suggest that it is wrong to alter nature for the well-being of human life. Using nature to build houses, make clothes, eat, and so on, is to follow the natural course of human life. Anything, however, can be taken to an extreme. When pride encourages us to go against the course of nature, as in Milo’s case, the natural course of life has a way of balancing that extreme.

While Milo sought to overwhelm nature with his strength, Bachelier painted the opposite: Nature overwhelms Milo. He is depicted as weak, with the tree stump holding him hostage, the sun beating down on his skin, the wolves tearing into his flesh, and the insect watching the whole thing happen. Nature and life abound, and Milo has no way to escape their omnipresence. He is humbled by his prideful attempt, and his many accomplishments are tainted by his embarrassing death.

To me, Milo’s story is a cautionary tale. We all have the capacity to test our limits, but we must make sure that our intentions are pure and that our pride doesn’t prevent us from following the course of human life and helping others with our efforts. This endeavor requires, however, that we sincerely investigate what “nature” is and what “course” it takes.