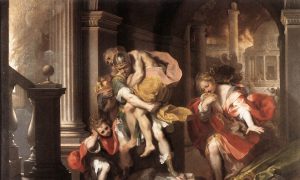 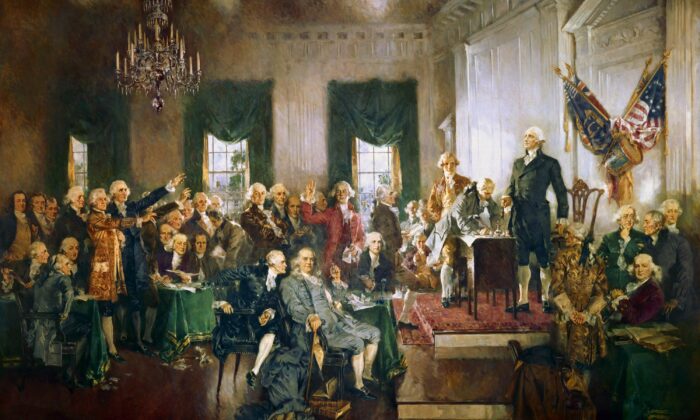 Many signers of our Constitution admired the Republican ideals of the Romans. “Scene at the Signing of the Constitution of the United States,” 1940, Howard Chandler Christy. United States Capitol. (Public Domain)
History

The Past Is Never Really Past: America and Rome

Ignorance may be bliss, but it can also be downright embarrassing.

Earlier this month, President Donald Trump met with Italian President Sergio Mattarella. The Washington Examiner reported that during a press conference, Trump had noted historic ties to the ancient city, saying, “‘The United States and Italy are bound together by a shared cultural and political heritage dating back thousands of years to ancient Rome.’”

As the Examiner reported, some people, apparently poor readers, tweeted out criticism of Trump’s remarks, believing that he thought the United States and ancient Rome had existed side by side. Others displayed their ignorance of history by declaring that ancient Rome and the United States had no connection at all.

America does, in fact, have many ties to ancient Rome. Let’s look at a few of them.

The Founding Fathers Admired the Romans

Men like Thomas Jefferson, John Adams, James Madison, and many more were avid students of Roman history and law. John Adams admired the republican ideals of Cicero and read his works throughout his life. His son, John Quincy, declared that Cicero was as essential to him as his limbs.

Men like Jefferson and Madison read historians like Livy and Tacitus, studied Plutarch’s “Lives,” and sought to emulate statesmen like Cicero, Cato, and Marcus Aurelius. George Washington so admired Cincinnatus, who took the helm of Rome during a crisis and then resisted the offer to become dictator, that Washington himself, who did the same, became known as the “American Cincinnatus.”

Our Laws and Constitution

This fascination with the ancient Romans helped shape our Constitution. Following the Roman lead, the framers instituted a Senate. They sought to create a mixed government based somewhat on the Roman model. They favored a republic, another Roman idea, rather than a democracy. And from their studies of the Eternal City, they realized that the practice of virtue was crucial to the survival of that republic.

Like our Constitution, our ideas of natural law—universal laws that exist independently of the positive laws of a particular place or people—are also Greek and Roman in origin. The Romans also deployed such concepts as equality before the law, holding that all Roman citizens, from nobles to commoners, must obey the same laws and face the same consequences if they failed to do so.

Once both Rome and Constantinople, the other half of the Empire, validated Christianity and that faith for centuries became the beating heart of Europe and shaped Western Culture. We remember Roman persecution of Christians, but all too often we forget that Rome became the vehicle by which Christianity spread throughout the Empire.

Walk through Washington, D.C., or for that matter almost any city or town in America, and you’ll find homes, churches, courthouses, and other public buildings with Roman markings. Arches, columns, and domes—these are a part of our Roman heritage. In my town of Front Royal, Virginia, with a population of about 16,000, several older homes reflect Roman architectural styles.

From the colonial period until the middle of the 20th century, many secondary schools offered, and many colleges required, the study of Latin. Though English is officially considered a Germanic language, we derive more than half our words from Latin.

Our state mottos are often taken from Latin. North Carolina’s “Esse Quam Videri” (“To be rather than to seem”), New York’s “Excelsior” (“Ever higher”), Virginia’s “Sic Semper Tyrannis” (“Thus always to tyrants”), and 19 other states pay homage to the descendants of Romulus.

Both law and medicine still use many Latin phrases, and when biologists and other scientists use binomial nomenclature for classifying species, they most often resort to Latin: “Oryctolagus cuniculus” (rabbit), “Quercus virginiana” (Southern live oak), “Homo sapiens” (human beings).

Cincinnati, Rome, Georgia, Hannibal, and hundreds of American cities and towns take their names from ancient Rome. New York State alone boasts Cicero, Pompey, Marcellus, Scipio, Virgil, and a dozen other towns whose names link them to the land of Caesar and Mark Antony.

We use the Julian calendar, first developed during the brief imperium of Julius Caesar and later modified, with the months named after deities, famous Romans, and numbers.

Those numbers, incidentally, used for September through December, come from a Rome with a New Year’s Day of March 1, and so no longer match our own equation of dates. September, for example, is descended from the Latin “septem,” meaning seven. Yet here we are, employing the Roman numbers for our months anyway.

More: We frequently resort to Roman numerals. We owe our ideas of roads, sanitation systems, and city planning to the Romans, who also invented concrete. Some of our holidays, including Christian ones, match up with Roman festivities. Toga parties, Caesar’s Palace in Las Vegas, wedding rings worn on the left hand—these are just some of the ways we remember ancient Rome.

So yes, the United States shares a cultural and political heritage with ancient Rome.

That many of our young people are ignorant of this connection should come as no surprise. After all, for the last 40 years, Western culture has existed in a state of siege. From “Hey, hey, ho, ho, Western civ has got to go” in the 1980s to our own time, when so many students graduate high school and college abysmally ignorant in the history, art, and culture of the United States and the West in general, the attack has been ongoing and devastating. The roots of our Greco-Roman, Judeo-Christian heritage run deep, but even an oak will fall when stripped of its branches and attacked by a mob with hatchets.

That old Roman Cicero wrote “To be ignorant of what occurred before you were born is to remain always a child.” And a child, as Ralph Waldo Emerson once noted, “is a curly dimpled lunatic.”

This ignorance explains much about the lunacy of today’s culture and politics.